Is the Green New Deal the only way forward? 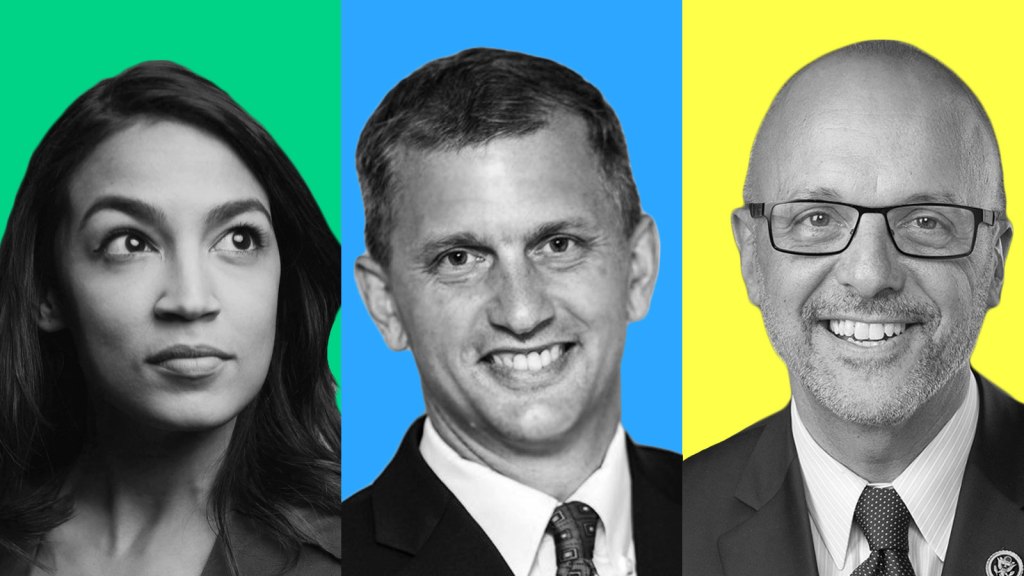 From left, Ocasio-Cortez, Sean Casten, and Ted Deutch.
one deal to rule them all

Is the Green New Deal the only way forward?

Last month, a group of U.S. House Representatives from both sides of the aisle introduced carbon-pricing legislation called the “Energy Innovation and Carbon Dividend Act.” It’s quite possibly the most boring name in the history of carbon tax-type measures (and it’s in competition with a whole bunch of snoozers).

But here’s something that won’t bore you: This is the first bipartisan climate bill in Congress in more than a decade. So why isn’t everyone talking about it?

It might be because Beltway climate hawks have been recently preoccupied with something called the Green New Deal — an economy-wide climate mobilization championed by progressives, such as Congresswoman-elect Alexandria Ocasio-Cortez from New York and a group of young activists called the Sunrise Movement. “For the first time in more than a decade, Democrats can approach climate policy with a sense of imagination,” Robinson Meyer wrote of the idea in the Atlantic.

He’s not wrong. The plan stands out, in no small part because, unlike the new bipartisan bill, it’s being championed by a younger demographic that’s not solely white and male.

Advocates for the bipartisan carbon fee argue that it’s the best approach to solving climate change — after all, no major federal environment bill has ever succeeded without support on both sides of the aisle. But the Energy Innovation and Carbon Dividend Act, which initially sets a $15 per ton of CO2 emitted and increases it by $10 each year, is most likely dead on arrival. Sure it could make it through a Democratic House, but the GOP-controlled Senate isn’t going to pass carbon-pricing legislation anytime soon — even though the annual revenue generated by the fee would go directly back to the American people (as opposed to the government).

Champions of the Green New Deal say a carbon tax won’t slash emissions quickly enough — and that their plan is the only solution that’s broad enough to actually address the scale of the climate problem. As Ocasio-Cortez reiterated at Bernie Sanders’ Climate Change Town Hall last week, the moon-shot proposal is “the civil-rights movement of our generation.”

But we have yet to see concrete details from the plan’s advocates about how this whole Green New Deal thing works in the short-term. Remember, we’ve only got a dozen or so years to head off the worst effects of warming — and a new report on Wednesday says global CO2 emissions are heading in the wrong direction, rising after a three-year pause. So the next year of Congressional haggling will send a strong signal about where federal climate policy might be heading.

The deal with the Green New Deal

“We’ve seen that carbon taxes are not winning elections, and they’re not winning at the ballot,” says Evan Weber, Sunrise Movement political director and a 2017 Grist 50 honoree. “A Green New Deal can be the biggest economic opportunity this country has ever seen and an opportunity to eliminate poverty here in the United States.”

But what actual policies do the Sunrise Movement and its allies suggest in order to achieve a green and poverty-free America?

Eventually, Ocasio-Cortez and others want big-ticket items: redirecting money away from fossil fuel interests, a national bank for green investments, and massive expansion of renewables. But those are future goals, once proponents have shored up support for the plan. As of right now, 21 members of Congress have endorsed a select committee on climate change — one of Sunrise’s demands — where presumably some of these details might be hashed out.

On Monday morning, more than 1,000 Sunrise activists staged sit-ins in three Congressional offices, including Nancy Pelosi’s. At time of publication, the group had convinced House Rules Committee Chair Jim McGovern to endorse a select committee on a Green New Deal. But apart from these achievements, little else concrete is currently on the table.

“The reason that we’re not talking about the specific policies right now is because we’re trying to press reset on the entire process,” Weber says.

Part of starting over is declaring freedom from the idea that federal climate policy has to be bipartisan. Reaching across the aisle to Republicans, whose party has largely spent the last decade rejecting climate science, isn’t high on the priority list for these young activists.

“If Republicans are willing to reject the influence of fossil fuels and lobbyists, then we welcome their solutions to be heard,” says Weber. “But if not, they’re, I think, going to become irrelevant very very quickly.”

Flannery Winchester, communications coordinator for Citizens Climate Lobby, the umbrella group championing the new bipartisan fee on carbon, thinks the Energy Innovation and Carbon Dividend Act has a bright future ahead of it, even with a GOP-controlled Senate. While its prospects are dim in the current lame-duck session, she says, the sponsors who are returning in the 116th Congress this January intend to reintroduce it.

“As far as the House, it absolutely has legs there,” Winchester explains, adding that there is Senate interest because the bill is bipartisan. “It will be back. We’re optimistic.”

Right now though, the bill’s lead sponsor, Representative Ted Deutch of Florida, says the legislation is aimed at showing members of Congress that an inter-party market-based policy exists. Such proposals are why the Citizens Climate Lobby helped start the Climate Solutions Caucus, a bipartisan group of representatives co-founded by Deutch.

According to Winchester, proponents of the legislation aren’t opposed to the scale of change Green New Deal folks are talking about. “We are in agreement that we want to put really bold, ambitious climate policy in place,” she says. “This carbon pricing bill is a first really big step in the right direction.”

The legislation would reduce emissions 90 percent below 2015 levels by 2050, an achievement Winchester notes is in line with the guidelines laid out by the U.N.’s Intergovernmental Panel on Climate Change this November. “At some point, you’re going to have to drill down and figure out what specific policies or legislation will help them arrive at the destination we all want to get to,” she says about the Green New Deal. Jamie DeMarco, state-level carbon price coordinator for the Citizens Climate Lobby, adds, “Everyone would agree that you can’t solve this problem without a price on carbon.”

According to Weber of the Sunrise Movement, “a carbon tax has the potential” to be a part of the grand solution his group is whipping up support for, but Green New Deal proponents are more focused on economy-wide big government fixes that give free-market moderates the heebie-jeebies.

Winchester says that her group remains committed to the bipartisan approach — and sees no other way to solve the climate crisis. “Even if there was one party control,” Winchester says, “it would be all too easy for that issue to then become a plank of the next campaign platform to say ‘We’re going to undo what the other side did.’”

Congressman-elect Sean Casten of Illinois will be a freshman representative in the new year. He ran on a climate platform, used to be a clean energy entrepreneur, and — full disclosure — wrote political deep cuts for Grist back in the day. Now that he’s secured his seat in the House, he’s focused on “actually getting shit done,” as the Democrat told ThinkProgress.

Casten’s vision of a green America definitely doesn’t include a Green New Deal. He notes that even if the Senate somehow voted to pass a 100 percent renewables by 2030 directive as Sunrise Movement activists and Ocasio-Cortez demand, he says, it would be up to the Trump administration to make it happen.

“You’re gonna defer that to the executive branch in this White House?” he asks. “The Green New Deal is effectively irrelevant without the roadmap, because you’re basically depending on Trump appointees to make the decisions on how to do it. Just because you’ve described a goal doesn’t mean you’ve made progress.”

As far as Casten sees it, we have two choices ahead of us. Option one is a Green New Deal. “If you do that,” he tells Grist. “You will be hailed as a visionary, but you will not accomplish a single thing.” Expending all that political energy to “reset the conversation” could even slow down the decarbonization process.

The better route, he believes, is pragmatism. “Focus on actually getting things done and do not depend on federal agencies to enforce them,” he suggests. The blue wave might have put a slew of new environmental advocates on Capitol Hill, but Casten believes the kind of action that will actually make a dent in our climate problem still needs to happen piece-by-piece at the local level (for now).

He’s referring to non-flashy policies like mandating that mayors make their buildings more energy efficient and upgrade HVAC systems, and even building wind farms and solar arrays in the right places to maximize output. What about those big proclamations where mayors pledge to have their cities go 100 percent renewable by a certain year? Casten says they’re “a total and complete waste of your time,” — effectively a press release with little commitment.

And while Casten supports carbon pricing, he’s under no illusions about the willingness of this Congress to pass a penalty on polluters. “The next two years are not going to be the time to pass the cap and trade bill,” he told ThinkProgress.

Instead of moon-shot deals or bipartisan displays, Casten is basically advocating for a slew of tweaks, overhauls, and mandates on a state-by-state basis proposed by people who have a firm understanding of America’s energy system. “I’m not saying that any of this is necessarily sufficient,” he admits. “But if you don’t have a roadmap, there’s no guarantee it happens. It’s just a nice hope.” While his pragmatic solutions might not work quickly enough to avert disaster, he says they’ll “create a positive change the minute they go into service.”

Regardless of who wins in this war of ideas, it’s not a bad notion to try to utilize every single emission-reduction tool we have at our disposal, no matter how small, in the quest for climate stabilization. It doesn’t sound as game-changing as a Green New Deal, and it certainly isn’t as straightforward as a carbon tax. But as we hurtle ever closer to an uninhabitable world, it’s probably worth keeping all our carbon-reducing options open.