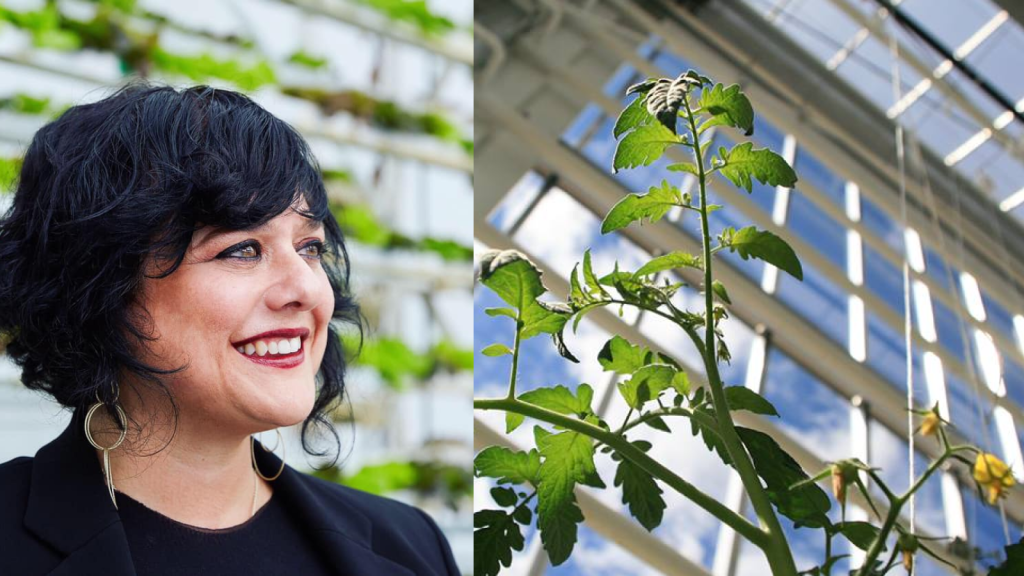 Vertical Harvest of Jackson Hole
How I Fixed It

Nona Yehia is CEO and cofounder of Vertical Harvest, a company in Jackson, Wyoming, that cranks out roughly 100,000 pounds of produce each year in a three-story, state-of-the-art, hydroponic greenhouse. Bumble Bee tomatoes, rainbow chard, butterhead lettuce — the company’s 34 employees generate as much bounty as a 10-acre traditional farm while using only one tenth of an acre of land.

And there’s something else: Many of those employees have developmental disabilities. Including this underserved population in such an innovative endeavor “is about empowerment,” Yehia says. “It’s about exposing ability.”

We caught up with Yehia (who, along with cofounder Penny McBride, was featured on Grist’s annual list of “Fixers” in 2016) to talk about a new documentary that follows the “tumultuous” first 15 months of Vertical Harvest’s endeavor, and the company’s journey in the years since it was filmed.

Here are some snippets from our conversation.

Yehia on reliving the early days of Vertical Harvest:

I like to call it adventures in sleep deprivation and weight gain. Anyone in the startup world can understand. [The film is] actually very hard for us to watch. But at the same time, it’s great to recognize how hard we’ve worked and how far we’ve come. Where it really shines is in telling the stories of our employees and their role in the startup.

On the origins of the company, and its employment model:

I have a brother with different abilities. This country has come a long way in education, providing an inclusive and supportive environment for people with disabilities in the classroom, but when it comes to employment, the opportunities are few and far between.

On befriending a member of the Tea Party who wanted to kill the project:

This guy had seen our business plan, and he basically said, “You’re using public funding. You’re designed like a nonprofit but you’re not a nonprofit. I’m going to kill your project.” And we said, “Hey, let’s talk.”

We started going to lunch with him every month, and he actually became one of our biggest advocates. He spoke on our behalf many times, and I believe he was really pivotal to our success. I learned from that process to embrace your detractors as much as your supporters, because you’ve got a lot to learn from them.

On being pioneers in vertical farming:

When we started, the Dutch were the only people doing hydroponic farming. We had consultants who were heavily involved in choreographing the building — and we love our Dutch counterparts, but it was really difficult not having domestic support. Our building is a very complex ecosystem. Every part affects a whole. You don’t know what you don’t know, and you have to move forward despite that fact. There were many places where we kind of looked at each other and said, maybe this isn’t going to work.

On the greenhouse design:

We stacked three greenhouses on top of each other, so that each level has a different microclimate. The middle level has a lot of airflow, so it stays cool. Lettuces like a cool environment. The third level gets much hotter, which is a perfect climate for viney crops.

It’s hard to develop multiple microclimates to grow different crops — [that’s why] so much of the [vertical farming] industry is growing microgreens. But we are very invested in growing a diversity of crops. You can’t feed a community on lettuce alone.

On fighting the bad bugs:

We have an integrated pest management system — bug-on-bug warfare. We have parasitic wasps that are right now patrolling to take care of white flies and aphids.

On the future of Vertical Harvest:

This week we received eight requests for facilities in cities around the world, and that’s a pretty common week for us. We are in the midst of developing a plan to own, operate, and develop seven greenhouses in different communities over the next several years. We have also gotten a contract from Fannie Mae to look at the feasibility of including a vertical farm in an affordable housing plan.

On the power of the work they’re doing:

One of our employees, who was washing dishes all her life, is now in charge of creating 200 pounds of lettuce a week, and has learned a vital skill in a new industry. Another employee can now create and repair vertical farming equipment, which is a totally rare and important skill. He will be a teacher in tomorrow’s farms. We’ve been able to expand what their future would look like, by lightyears.

Hearts of Glass has made the festival route, and had its premiere in Jackson at the start of June. It’s not available to the public yet, but you can catch a free screening in Chicago or Wyoming in the coming months.