Here's why Iceland is mourning a dead glacier 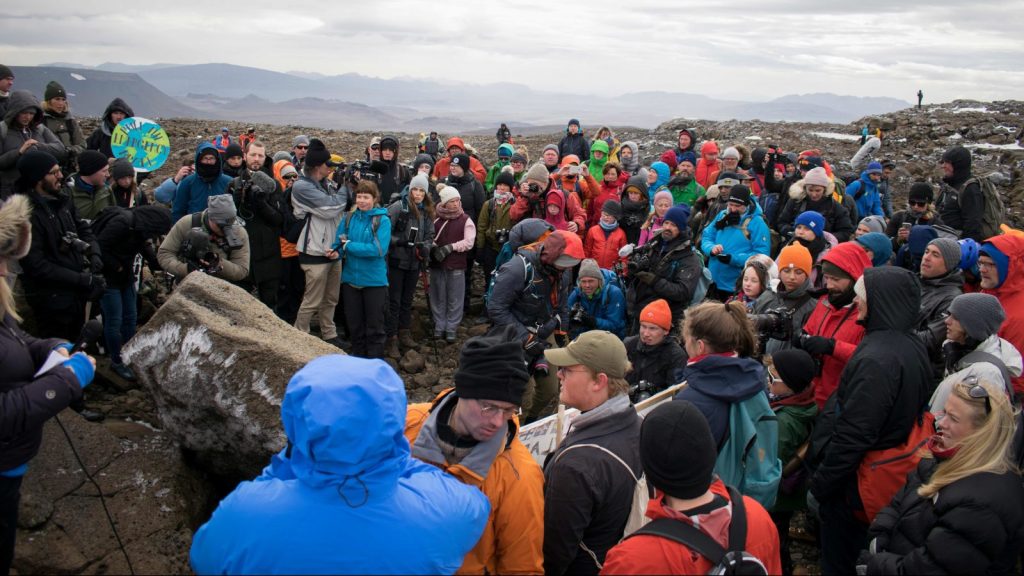 Here’s why Iceland is mourning a dead glacier

Some 100 people gathered at the top of a volcano in Iceland on Sunday for an unusual funeral. The victim: A 700-year-old, six-mile glacier. Cause of death: climate change.

The Okjokull glacier actually died a decade ago. But Iceland decided to hold the funeral for the deceased ice mass — it’s first to go extinct from rising temperatures — last weekend amid warnings from the scientific community that hundreds of other glaciers across the sub-Arctic country could soon disappear. Iceland is projected to be entirely glacier-free within 200 years.

A plaque at the site of the vanished glacier, installed with a drill and assistance from some of the children in attendance, reads: “This monument is to acknowledge that we know what is happening and what needs to be done. Only you know if we did it.” Henceforth the glacier will be known as just “Ok”; the Icelandic word for glacier, “jokull,” no longer applies.

Iceland is mourning Okjokull, its first glacier lost to climate change. This plaque, with a message for future generations, is one for us all. @AFP pic.twitter.com/WL3tEiFtlR

An ice-free Iceland represents more than just an identity crisis for Icelanders. If global leaders don’t take action to slow rising temperatures, the melting of Greenland’s ice sheet alone could raise sea-levels more than five feet in the next 200 years. Enormous quantities of methane slumbering in the Arctic permafrost are threatening to come alive as record temperatures fry the top of our planet. Two fast-melting glaciers in Antarctica are holding back enough sea ice to flood oceans with another 11 feet of water.

The symbolic funeral took place three days before a meeting in Reykjavik between Iceland’s prime minister, Katrín Jakobsdóttir, other Nordic leaders, and Germany’s Chancellor Angela Merkel. Jakobsdóttir said she aims to make addressing the climate crisis a priority at that meeting. “We see the consequences of the climate crisis,” she told the group of mourners. “We have no time to lose.”

Iceland may be the first country to hold a funeral for a dead glacier, but it’s not the first to mourn a natural wonder under assault by global warming. Australia is grappling with the slow death of its Great Barrier Reef, three islands have disappeared into the rising sea in the past year, and the United States is on the cusp of losing many of its cultural sites, like Jamestown, to rising tides.

And the death count is bound to rise as we make our way deeper into this century. Are we prepared to hold a funeral for, say, Miami? By 2070, the city’s streets will flood every single day (whether South Beach real estate agents realize it or not). If world leaders can’t get rampant emissions under control, we’d all better start getting used to living in a world that is just “Ok.”