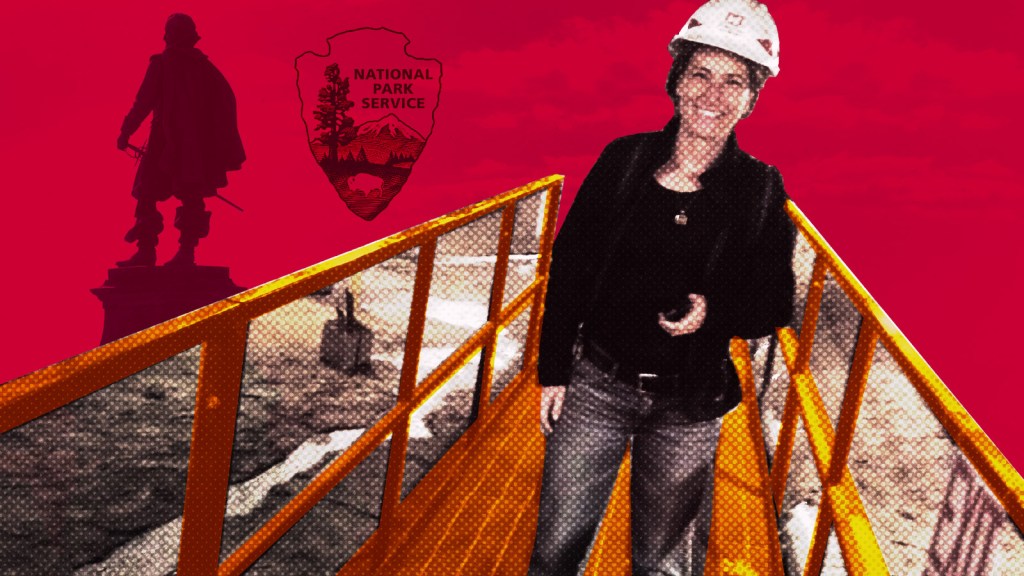 When English settlers first landed in Jamestown, Virginia, in the 17th century, they noticed the winters and summers were more extreme than in their homeland. The newcomers were confident that through the land’s cultivation, the weather would become more temperate. They believed their very presence could change the climate, according to historian Karen Ordahl Kupperman’s book The Jamestown Project.

They were right. Average temperatures in Virginia have risen by about 1 degree Fahrenheit since 1895 thanks to global warming. Jamestown Island, which still holds the remnants of America’s first English settlement, is subject to coastal erosion and rising sea and groundwater levels. That means Historic Jamestowne could one day be completely submerged — and a piece of the United States’ earliest settler history could be lost forever.

America’s cultural heritage hold blueprints for how to navigate our current world, says Marcy Rockman, who for seven years served as the climate change adaptation coordinator for cultural resources at the National Park Service (NPS). “Human memory is relatively short, so our cultural heritage are the things that remember for us or that help us remember the things that have happened,” she explains.

Everyone knows the importance of preserving natural resources — which for the NPS means wilderness areas, national monuments, and ecological systems. But without cultural resources, Rockman says, we lose important perspectives for viewing our civilization. Places like Jamestown, part of Colonial National Historical Park.

Take geoengineering. Rockman listens to the increasingly desperate debate about counteracting the effects of global warming with giant science experiments, and immediately thinks back to 1607. In essence, she believes, it’s another case of trying to bring about the climate one wants, just like the Jamestown settlers desired.

“It’s like, ‘Oh my God, do you realize how closely related your expectations and your pressures are to events that happened over 400 years ago?’” she says. “I don’t think many of us have that understanding of how deeply rooted our patterns of behavior are.”

Preserving those patterns was one of the reasons why Rockman felt passionate about her job with the Park Service. But she faced huge roadblocks: a Secretary of the Interior with an allergy to mentions of “climate change,” a critical lack of funding, and a widespread and insidious culture of workplace harassment and sexism.

So last month, she resigned.

Her absence leaves a climate-shaped void at the Park Service — the lead federal agency that oversees cultural resources. (In recent years, she’d become a team of one.) And as more reports shed light on the myriad ways climate change is going to slam the U.S., Rockman wonders whether our cultural heritage is doomed to be lost forever.

On a fundamental level, Rockman’s job was figuring out what climate change meant for everything from the Park Service’s archeological sites to its museum collections and archives. Since 2015, she had been working as the sole cultural resource member of the Climate Change Response Program — her pleas for more support perpetually ignored or rejected.

On November 15, she posted a thread on Twitter announcing her resignation: “My reason for leaving is a series of pressures from the NPS that required me to spend ever more time & energy fighting for the right to exist & perform basic tasks,” she wrote. One of those pressures, Rockman says, was being harassed by a male manager in the cultural resources department for more than a year.

If harassment at the Park Service sounds familiar, it’s because the agency has been publicly struggling with it in recent years. An internal survey released in 2017 found that 40 percent of its workers experienced some form of harassment over a 12-month period. The news didn’t exactly come as a surprise to Park employees. Many of them had been pushing for action for six months, after the inspector general of the Interior Department (which oversees the Park Service) revealed a culture of sexual harassment and sexism in some national parks.

Employees, including Rockman, say their efforts to report mistreatment were ignored. “There were some very immediate situations I had requested relief from,” Rockman says. “Basically, the direct management in cultural resources said, ‘We don’t care.’”

Rockman says she repeatedly raised concerns informally to colleagues and superiors — but it only made her experience at work worse. Filing formal complaints didn’t help either. “Every time I said I needed support, I was the emotional woman, or the woman who needed to control her emotions,” she says.

Rockman says the harassment intensified until her department started withholding financial support for even the most basic things, like compensating her for mandatory overtime.

As the #MeToo movement gathered steam, she hoped that momentum would inspire her superiors to address the harassment. When nothing changed, she knew she had to leave the agency.

“You’re like, ‘Wow, we are really not there, are we?’” Rockman says. “This is another battle that needs to be fought.”

When reached for comment, NPS Chief Spokesperson Jeremy Barnum said, “We appreciate the service Marcy provided the public and the National Park Service during her tenure here, and we wish her well in her future endeavors.”

There was another major hurdle standing between Rockman and her ability to do her job. While mentions of climate change haven’t been wiped from Park Service websites (as it was from EPA sites), Interior Secretary Ryan Zinke has made it more difficult for employees to get funding for critical projects since coming into office.

“We knew that ‘climate change’ was not a phrase that was in his priorities,” Rockman says, adding that, in order to get their projects approved, Rockman and her colleagues avoided the phrase. “We only used the words ‘climate change’ when there was absolutely no other way to describe what we were doing.”

A subtle tension within the Park Service between emphasizing cultural resources or natural resources also hindered Rockman. When she was hired in 2011, she became the first person charged with researching the effects of warming on cultural heritage in national parks. And she watched as, time and again, her work was sidelined within the department, with preference and funding given to the natural resource side. The year she was hired, the Republican Congress slashed funding for the agency’s climate change program by 70 percent.

It wasn’t just a funding issue. Rockman says people within the agency treated the phrases “cultural” and “natural” as gendered categories, something she highlights in her resignation letter. Cultural heritage was “the feminine, the weaker, the one that is subservient to nature,” she tells Grist. Natural resources were given a masculine connotation and viewed as what the NPS should be focusing on, she explains.

Rockman says that power dynamic laid the groundwork for more serious, interpersonal issues within the department.

Nearly a month after her resignation, Rockman’s work on cultural resources is far from over. She’s working under the auspices of the International Council on Monuments and Sites to incorporate cultural heritage into reports written by the United Nations’ Intergovernmental Panel on Climate Change — though she is unpaid and her first task is to raise money and build a university program for this work*. But Park Service employees won’t have access to the protocols and systems she was hoping to put in place to protect cultural heritage from the effects of warming.

“I could see the things I wasn’t able to build that I wanted to,” she says. “And now I’m pretty angry that they don’t have them.”

One of the most immediate casualties could be Jamestown. Right now, Historic Jamestowne is more at risk of being submerged from the bottom up thanks to rising groundwater, than being swamped by rising sea levels or storms.

Rockman understands this issue, and the Park Service could be at the forefront of acting to preserve the site. But that doesn’t seem to be in the cards, at least under the current administration.

“Our whole society is built on what we’ve learned from other generations,” Rockman says. “It’s everything. It’s everything around us.”

*This article originally stated that Rockman had a new job with the International Council on Monuments and Sites and has been updated to reflect that her position there is unpaid.