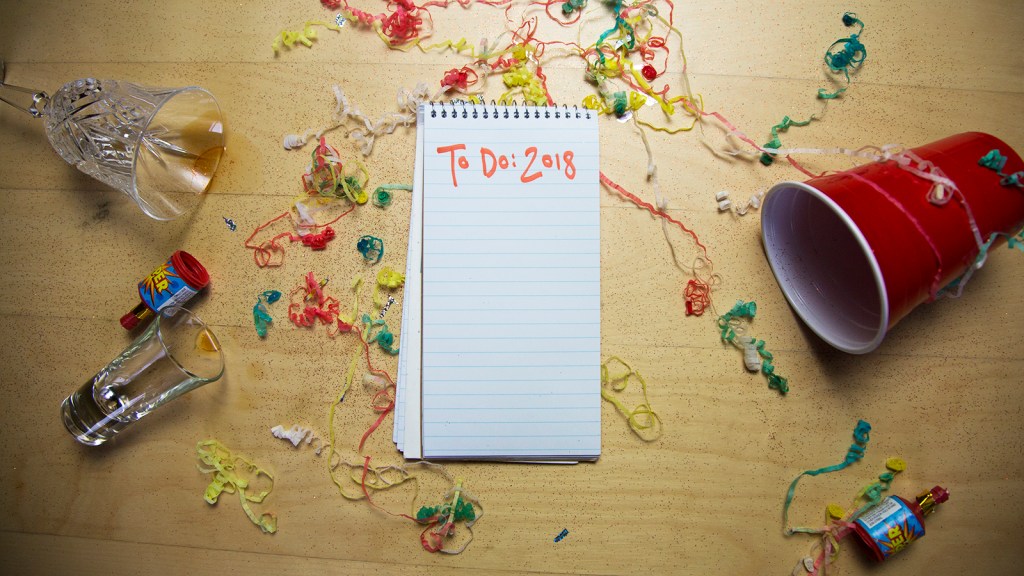 One of my goals for 2017 was to attend a rodeo, because I’d never been and I wanted to stand in the light of truth every time I yelled, “This is not my first rodeo!” I wasn’t, however, fully aware that a rodeo entails cattle being violently wrestled into submission, to lie half-heartedly kicking at the ground, bleating in dismay.

If you’re feeling a bit … bovine right now, your New Year’s resolutions might be an attempt to try to come back from the year’s calf-roping.

Which means they’re probably pretty inwardly focused. That’s the nature of New Year’s resolutions, isn’t it? To make oneself a little bit better, a little bit happier and kinder. I’m going to gently suggest a few options to turn your self-improvement goals a little bit more toward world improvement, or at least other-people’s-lives improvement, in light of some of the things that have happened this year.

Get in shape. As so many things in the world change and collapse (like ecosystems), a certain constant is that countless millions of people will resolve, every January 1, to get better abs. Working out makes you stronger, in a better mood, more attentive — great goal!

… and, you could try to get your city a bike lane. Anyone who says biking isn’t a workout is a liar, and anyone who says biking in a city without good bike infrastructure isn’t kind of scary is also a liar! But federal climate action is basically a no-go as long as Trump is in office, so carbon reduction lies in the hands of our cities. That means drastically cutting drivership, which means drastically increasing bike…rship. And the way to do that is to make sure your city prioritizes better bike infrastructure. Look up your local bike advocacy org, and ask them how you can help.

Get more in touch with nature. And yourself. You’re part of nature! It’s 2017, we live in the age of Goop, and everyone wants to be a little more mindful. Access to nature has proven benefits for anxiety, depression, and general malaise, so you’re trying to get out in those trees!

… and, you could volunteer for or donate to an organization that helps kids do that. This year, Interior Secretary Ryan Zinke proposed hiking the fees to enter some national parks by roughly 100 percent, which makes them inaccessible to millions of people. You can counteract that affront to any kind of equity in nature by trying to get involved with any Outdoors Alliance for Kids organization or Mountaineers branch — or research any organization in your area that tries to connect kids with limited resources to nature. There are tons.

Read more books. Real books! The internet made everyone insane this year, so it makes sense to check that madness by reading more books, from start to finish, without checking your phone every 43 seconds. Reading makes you smarter and better at talking to people. Excellent! Let’s all be like that.

… and, you could organize an environmental book club. Bear with me. You have a bunch of friends who are also, at this time of year, trying to be more informed, active, engaged, etc. A book club is basically something where you are held accountable for not reading a book (like school, but with wine), a way to hang out with friends, and a way to actually examine and articulate all those big ideas you had while reading the book. Usually, those ideas inspire you to go out and tackle all those big environmental problems. For starters, let me turn you toward The Nature Fix, by Florence Williams, which explores how nature can cure our anxiety; Mark Sundeen’s The Unsettlers, examining what it really means to live off-grid; or something off our list of top environmental justice reads, like Brown is the New White.

Call the people you care about more often. In these terrible modern times, we have a million ways to reach the people we love. The phone is the best one, sorry: It requires little to no effort, you get to hear a friendly voice, you have to engage in real! listening! conversation, and people are generally so afraid of this communication tool that your embracing it will come off as an extra-special achievement. If you, like me, sent 17 million texts in the past year but made only a few phone calls a month, maybe you want to call more.

… and, you could call your elected officials. They’re just like your family, except they hate you. Just kidding! 2017 saw a massive uptick in calls to political leaders, because so many people were so angry about so many pieces of legislation. Can we even recall? The health care bill; hurricane relief funding; the confirmation of anyone on Trump’s cabinet; immigration reform; the tax bill. Even if your call on a passion issue doesn’t sway a particular vote, it does communicate that you’re pissed enough not to vote for that official in the next election, and that can change things. And your call on super mundane issues that actually matter — local environmental regulations, for example — can change minds.

Save more money. The tax bill that just passed Congress will financially harm pretty much everyone who’s not a billionaire, so I guess 2018 is the year to save that tax cut you’re getting because it’s temporary. Anyway, this is one of the most popular New Year’s resolutions, according to Twitter.

… and, save a little extra to donate to causes of your choice. Lucky for you, we covered this in our Apathy Detox in April. Any charitable giving is wonderful, but a target percentage of your income to shoot for is between 3 and 5 percent. Let’s call it 5.

If any of you are ~inspired~ by any of this, please email me at askumbra@grist.org, and I’ll put together a group so you can help each other keep these resolutions and hold yourselves accountable!