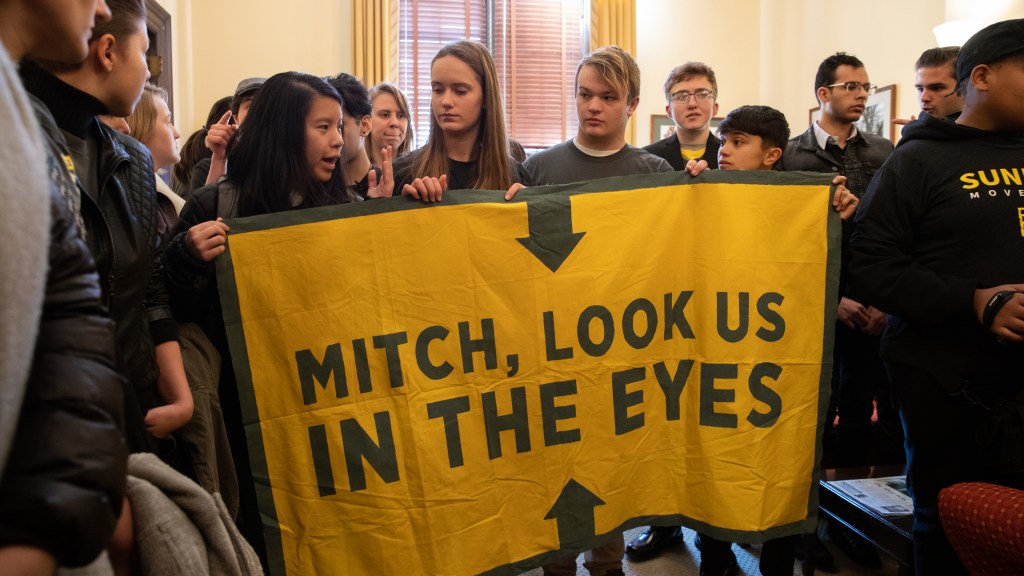 Hundreds of youth climate activists marched on Senate Majority Leader Mitch McConnell’s Washington office and 42 of them were arrested by police, according to organizers.

The protesters — who planned for the arrests — were led with their hands behind their backs to a police bus as supporters chanted: “Which side are you on now? Which side are you on?” They filled the Republican leader’s office and the hallway outside, with constituents from his home state of Kentucky telling stories about poverty and their fears of the human cost of climate change.

The group, the Sunrise Movement, which included high schoolers, demanded to talk to McConnell about the Green New Deal, a proposal introduced by Representative Alexandria Ocasio-Cortez and Senator Ed Markey. The GND would radically reduce greenhouse gases and try to lessen social inequity. Republicans have condemned it, and some Democrats have said it is not feasible in the 10-year timeframe proposed.

McConnell has said the Senate will vote on the proposal, in a move that could put centrist Democrats in a difficult position. The Sunrise Movement called McConnell’s plans for a vote a “shameful ploy.” They say he has fought any action to stall global warming.

A staffer greeted the group and took down contact information. Protesters from Kentucky said they have repeatedly sought meetings with McConnell.

Robert Steurer, a spokesperson for McConnell, said: “As with all Kentuckians visiting D.C., we welcomed them to the office today. It’s worth noting that two weeks before, Senator McConnell had already announced that he will be bringing the Green New Deal up for a vote in the U.S. Senate. Also last week, Senator McConnell’s state director met with a group of students from the organization in the Louisville office to discuss the issue.”

One protester from Kentucky, Jenny Bencomo-Suarez, yelled inside McConnell’s office: “He has not answered a damn voicemail.”

She said: “He has consistently denied access to us — access to resources, access to jobs, living wages, healthcare, and the right to sustain ourselves in a livable, breathable future.”

Destine Rigsby, a 17 year old from Louisville, said of McConnell, who did not appear: “You line your pockets while we die in floods and choke on the air we breathe, yet you don’t even have the decency to look us in the eyes.”

Last week, California Democratic Senator Dianne Feinstein faced criticism over her response to a group of children and teenagers from Sunrise who were also asking her to support the GND.

A video of the incident went viral on Twitter after Feinstein appeared to lecture the youngsters. The group later accused her of reacting “with smugness + disrespect.”