I want to be a parent, but how can I when things seem so awful? 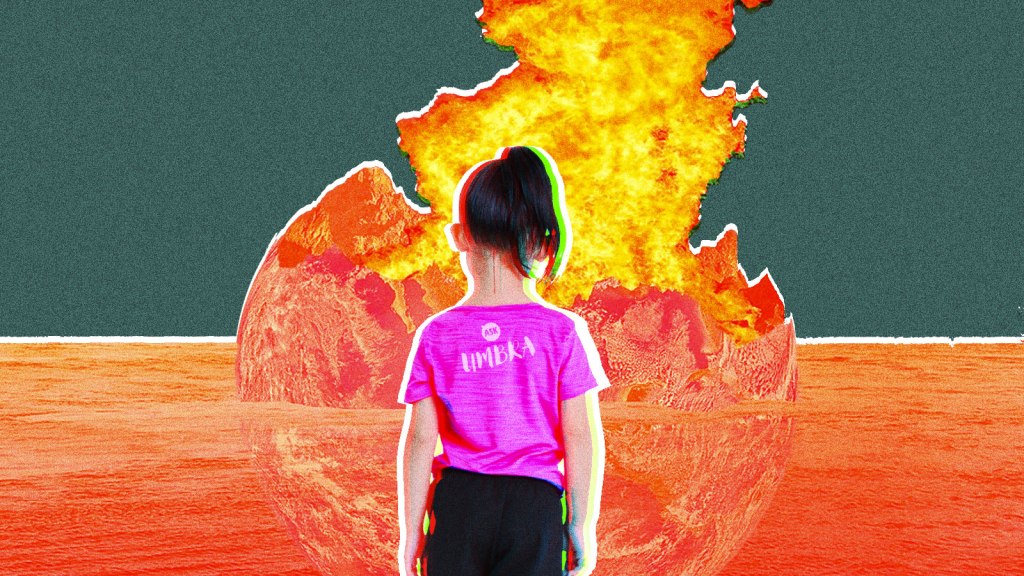 I want to be a parent, but how can I when things seem so awful?

Q. Dear Umbra: How can I possibly raise a kid with all of this gestures to everything burning, flooding, and exploding across the world going on?

— Having Escalated Longing to Procreate

This is an Umbra question I can’t answer alone.

It’s one I ask myself all the time — more and more since my 30th birthday — and I still haven’t come up with a very good answer. I very much want a child of my own someday (the operative word being “someday”) but I have no earthly idea how to raise a kid in any context, let alone in a never-ending nightmare news cycle. Despite my hardest work to be upbeat and hopeful about the future for you all, I’m not some delusional Tinkerbell-Pollyanna hybrid. I read the news too, it makes me feel just as horrified as you, and I don’t always have an idea for how to deal with it.

So I decided to ask some of the parents here at Grist how they wake up every day and attempt to raise a climate-conscious child. I started by chatting with my clever and kind editor, Teresa Chin. (If you have any thoughts on her thoughts, I’d think twice before sharing them directly because she’s almost eight months pregnant with her second kid, and she informs me it’s no fun gestating a human in August.)

Yup! It’s a crazy time to be super pregnant AND raising a 3-year-old AND keeping up on this particularly dark time in the news cycle. Being a parent can be hard in the best of times, but humanity has not exactly been bringing its A game as of late.

I assume you’re referring to the latest climate news — among everything else. I mean, even if you wanted to, you can hardly ignore it — it’s your work.

Being a parent does come with at least some degree of climate guilt. There was that big study from a couple of years ago that suggested that the most significant decision in determining your carbon footprint is how many kids you have. The authors calculated that one child adds about 60 tons of CO2 to your footprint per year. I think of my carbon footprint the same way many new college grads probably feel about student loans. Like, “Oh crap, how am I ever going to repay this?”

That being said, I don’t believe people should have to apologize for their decision to have kids. I feel like becoming a mom has given me greater empathy for others, and I’m invested in the future of the planet in a different way than before. So if anything, it’s given me a reason to work harder to make sure we take climate action before it’s too late.

Right. I think about that whole “a child is the biggest part of your carbon footprint by far” statement a lot, because it gets thrown around so much in environmental circles. I’ve even thrown it around myself. It makes sense, because you’re creating a whole new human with consumption needs of her own. But then it stops making sense when you realize you’re comparing an infinite series of decisions (all of the decisions in your child’s life, their grandchildren’s decisions, etc.) to very finite ones (flying, eating meat, owning a car).

But that 60 tons of carbon per year estimate is a baffling and literally time-transcending figure, when you break it down. It comes from a study that rests on essentially a philosophical premise: That an individual is responsible for the carbon emissions of her descendants.

We could have a slew of debates about that idea, but the one that strikes me is: Should the onus of a person’s entire life course and consumption choices therein lie entirely with their parent? It contradicts the idea that people become individuals and responsible for themselves. My great-great-great-great-great-great-grandmother could surely never have conceived of a world in which I would be able to live the life I lead. Nor could she have imagined that the entire system on which modern life is based would jeopardize the existence of human civilization. How could she be responsible for my flights, for example?

And going forward, how can anyone predict whether my child becomes an oil tycoon with three McMansions, a yacht, and four SUVs, or a zero-waste fanatic who lives in a tree? Or what if she’s able to live a carbon-free life that we can’t imagine yet? At what age does my child’s carbon footprint become independent from my own — 18? In that case, could there be such a thing as early carbon emancipation?

The idea of climate responsibility is a tricky one. Many young people today blame adults for not having taken more drastic environmental action, and I think it’s a legitimate point. We certainly owe it to the next generation to think long and hard about the planet we are leaving to them.

But I don’t think the best solution to curbing emissions is to stop having kids entirely. There are plenty of other climate solutions and policy avenues that we have yet to explore at this point before we start getting too judgy about people’s reproductive choices.

I had an editor suggest to me once that people who consider the climate in their family planning decisions are actually the ones who should be procreating. It’s a bit of a hot take, to be sure, but I think there’s something to it: If you’re raising a child to have a strong, active sense of environmental awareness and responsibility, aren’t you actually doing something good for climate change?

That’s my hope, certainly. I’m very aware that I’m not just raising another couple of carbon-producing humans: I’m raising future voters and potential leaders. And just as I try to instill other values in my kids (Help others! Don’t bite people!) I want to plant in their psyches the seeds of environmental stewardship.

And how do you do that?

My 3-year-old is too young to grasp the urgency of climate change, though I recognize some of the most outspoken advocates of the movement are honestly not that much older. In our family, we still talk about the environment in an age-appropriate way. We also get the vast majority of her toys and clothing second-hand via thrift stores or buy-nothing groups. We try to keep food waste to a minimum (a tall order when you’re dealing with a picky toddler). Oh, and we bring our daughter with us when we vote. She loves the “I voted” stickers.

I love those, too!

Kids want to be helpful, so it’s about making the time to let them participate even when it’s inconvenient. I had a moment this weekend where my daughter asked if she could help me with the recycling. Toddlers, while very cute, are not great at getting things done, especially when that thing happens to be sorting great goopy piles of garbage into their proper bins. But even though I knew a) it would take longer, b) she likely would get super dirty in the process, and c) the effectiveness of recycling itself is kind of questionable, I said yes. It’s about instilling those values early and modeling them in our everyday life.

That’s the first thing I’ve heard in a while that makes me excited to have a child in this world. I would love to compassionately explain recycling to someone who isn’t an ex-boyfriend!

You are welcome to explain recycling to my kids anytime.

It actually does take a village to produce a little climate-minded creature, so Teresa and I also solicited some particular tips from other Grist parents and their partners.

Teresa: Buy baby gear second-hand since the window of time where you need certain kid supplies is super short. We did the whole baby shower thing for kid #1. For kid #2, I’ve gotten everything from pregnancy pillows to newborn clothes from other parents. Buy Nothing networks are also a great way to get rid of stuff you no longer need. Using them cuts down on consumerism, and it helps build community.

Jess Alvarado-Lepine, Membership Officer: Also, see if there are any local parenting groups that focus on green living. I also found hiking groups (carpooling to the trailhead with other mamas) and through those groups, I was also introduced to women that had kids slightly older than mine. Now, I’ve got a constant source of lightly used clothing and toys coming my way.

Greg Hanscom, Senior Editor: Tell all your friends and family to get your kids nothing for Christmas. (haha) (Teresa note: I’ve actually tried this, and it did not turn out well.)

Greg: Get your kids on bikes and buses early. My girls (now 11 and 14) are super competent city bikers, and my big kid rides the city buses with her pals — they like the independence it gives them.

Tara Thomas (Greg’s partner): Look for extracurricular activities that are close to home! Tap into the offerings at the local rec center, etc. That way you won’t be driving all over creation to get them to dance, gymnastics, or soccer practice. When driving is unavoidable, carpool! And combine or batch errands to avoid multiple trips.

Jess: Grow a garden and teach your kiddos where their food comes from. It actually made my kid want to eat his greens as he’s involved in the process.

Teresa: Tell (or show!) kids where their food comes from. That includes being clear that hamburgers are made from cows, etc. Keeping them connected to the food we eat will help them make more informed decisions when they get older.

Jess: Really it just comes down to TALKING with your kid about responsibility for the planet in a fun and, when possible, hilarious way. I talk about picking up trash, turning the lights off, being mindful of water use, and recycling all the time.

Nathanael Johnson, Staff Writer: Allow your kids to awaken you to the natural world around you, and enjoy it together. I wrote a book about kids and their sensitivity to the wonder of nature in cities, which adults tune out. No matter how hard we work to control the wild, life finds a way — and so do children. Kids will find wilderness wherever it springs up: in gutters, in vacant lots, in overgrown park corners. My girls are just as entranced by this feral spot as they are by national parks. I think getting adults to see the world that way could be revolutionary.