Why are we making kids into climate celebrities? 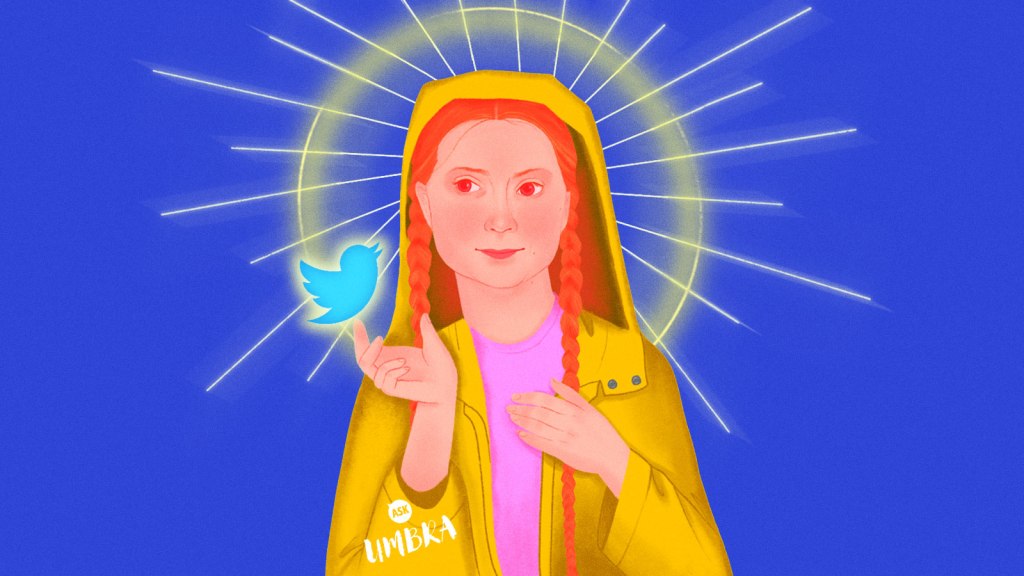 Why are we making kids into climate celebrities?

Why aren’t more famous people speaking out about climate change? Gen Z is supposed to care more about global warming, but I just don’t see their celeb receipts. What gives?

–Followers Are Made for Educating

Historically, celebrities aligning themselves with causes have done great things: Elizabeth Taylor and the AIDS crisis; Jane Fonda and the Vietnam War; even Pamela Anderson and animal rights. But if that support is gasp superficial, it can go really wrong.

Case in point: On November 5, 2018, 23-year-old model Kendall Jenner Instagrammed a video of some tangerine-petal daisies rippling in a sunlit field with the caption: “hey! go vote! do good things. be nice to our planet.” Ostensibly, it was a directive to her vast audience to do the most meaningful thing the average person can possibly do to address climate change: participate in the civic process! An excellent message we can all get on board with; it garnered about 830,000 likes.

But less than a month later, Jenner posted another picture of herself, this time ascending the stairwell to a private jet. The caption read, “anytime, anyplace.” It was an ad for a private jet operator. It received 2 million likes.

I will be frank here: I could not give less of a shit what celebrities have to say about climate change, because I believe that most are driven by the sole purpose of benefiting themselves. The fame- and glamour-obsessed culture of our society has made the kind of extravagance and profligate consumption modeled by the super-rich and famous a widespread aspiration. And when it comes to something like climate change, a universal problem borne of said obsession with consumption and the economic system designed to perpetuate it, I fail to see the significance of what anyone in that gilded world has to say.

But that said, the nature of fame has changed. The price of admission has dropped from an agent’s retainer to a smartphone and some good lighting; anyone with the right Instagram post (or meme or TikTok) at the right time can suddenly seize a following for themselves. The result isn’t just a generation of influencers who have spun million-dollar sponsorships out of a few well-angled booty pics. It has also meant that ordinary people (i.e., not millionaires) with a genuine cause and a true message have been able to find an audience.

The most powerful climate “influencers” of today are not celebrities who have achieved fame and then used their platform to deliver some wan cliché about “being nice to the planet.” They’re ordinary people — mostly young women — who are alarmed about the climate crisis and demand world leaders pay more attention to it. In environmental circles, their activism has made them celebrities, not the other way around.

“I think that people my age are just kind of done listening to people who are on red carpets all the time, and then post one picture of a turtle on the side,” said Jamie Margolin, the 17-year-old co-founder of youth climate group Zero Hour. “They’re getting sick of fakeness, and with the urgency of the climate crisis, it’s not enough to have it as your side thing. People are more drawn to influencers whose whole thing is tackling the climate crisis.”

It’s a far cry from Kardashian appeal, to be sure. I spoke to Nancy Jo Sales, journalist and author of American Girls: Social Media and the Secret Lives of Teenagers, about how we got to this particular “ordinary” influencer moment. Sales has been documenting the culture of fame and young people literally since I could read, and American Girls traces how adolescent girls in the early days of Instagram, Snapchat, and Vine had no trouble gaining followings on these platforms. But that attention tended to be sexual in nature, or at the very least based on how they looked.

Over the phone, Sales observed that there’s been a palpable shift: The Gen Z girls coming up now are seeking to be known more for their ideals, less for their beauty. “They seem very strong in their sense of their power to change things,” she said. “I think this is wonderful. They’re seeing social media as a tool for change.”

The nature of fame has changed at the same time that climate change has hit a new note of urgency. So where are all the climate change stars? Increasingly, sitting in homeroom on their smartphones. This kind of fame could be seen as progress toward a culture that celebrates authenticity, justice, and moral courage over a symmetrical face. But like any fame, it comes with its own peril.

Young climate activists are easy to idolize — they’re laser-focused, idealistic, and generally scandal-free. But pinning the hopes of a planet on someone who has yet to attend prom is a high bar.

Greta Thunberg, the stony-eyed Swedish 16-year-old who started a weekly strike from school to raise climate awareness, is likely the most famous Gen Z climate activist. After addressing leaders at international gatherings such as the World Economic Forum in Davos and the U.N. COP24 summit in Poland, she catapulted into the public eye to an almost disturbing extent. She appeared on the cover of TIME magazine, lit like a Dutch Renaissance painting. She’s been profiled by the New Yorker, the New York Times, and Rolling Stone. She is nominated for a Nobel Peace Prize. You can even buy Saint Greta icon prints for about $50 on the internet.

While the success of other social media influencers’ brands tends to be measured in much cheaper currency, like lipstick sales or sneaker endorsements, the teen climate leaders I spoke with sense that their worth is measured by how successful they are in resolving the climate problem. It’s the logical progression of what happens when attempting to solve the most daunting problem in human history is one’s “brand,” one’s “whole thing.”

“It’s kind of taken over my identity,” Margolin said of her climate activism when I talked to her over the phone recently. “You’re known for that thing, so if you ever stray from it or fail at it, the reason why people value you kind of goes away. I’m also a writer and a student and a friend. But people don’t think of me as who I am for my personality, it’s ‘Jamie the climate girl.’ And my worth and identity and success relies on Zero Hour being successful.”

Alexandria Villaseñor, the 14-year-old founder of Earth Uprising, agreed that there are drawbacks in defining yourself by climate activism at such a young age. “I know what I’ve done will follow me the rest of my life,” she wrote in a Twitter DM, “and because of that people will expect that I’ve chosen my life’s work at 13!”

The more striking sentiment echoed by Margolin and other young activists is that they did not necessarily choose the climate cause — it was essentially thrust upon them because of the time in which they happen to be growing up.

Leaders in the climate movement are necessary. Young leaders in the climate movement are necessary; young women of color leaders, I might argue, even more so. To expect the already-famous to lead is missing the point (I mean, what HAS Leonardo DiCaprio done for climate change?), but at the same time, to impose fame on the leaders does too. Fame in the United States is unfortunately synonymous with worship and perfection; when someone becomes a public figure, they become defined by others’ expectations. But no matter how mature they may be, these are children!

Greta Thunberg may “grow up” and decide she wants to be a carpenter; Jamie Margolin may want to be a writer; Alexandria Villaseñor may want to be a baker. That is their right as free adults. Until then, they’re trying to do their best on an unfathomable challenge, and we can support them and follow their lead without canonizing them.