WEST PALM BEACH, Florida — Sarah Renee Oźlański had tears in her eyes as she watched the Grand Celebration cruise ship dock at the Port of Palm Beach on the morning of September 18. The boat had just returned from the hurricane-ravaged Bahamas, and onboard were more than 200 evacuees, including 21-year-old Natandra Lewis and her 1-month-old son.

The two women had never met, but Oźlański already considered Lewis a friend. They’d connected online, and Oźlański and her boyfriend had offered to put Lewis and her son up for a few days so the young mother could rest and find another place to stay.

It was one of the countless gestures of kindness made as part of the frantic and largely volunteer relief effort. This was the Bahamas Relief Cruise’s second relief voyage. The nonprofit, established by Palm Beach County businesses and organizations after Hurricane Dorian, has been transporting volunteers to the island and bringing evacuees to temporary respite in Florida. In many ways, the situation in South Florida is an early indicator of both the refugee crisis on the horizon as climate change fuels extreme weather and sea-level rise, and the failings of governments to step up and address the situation. Instead, the effort to help Bahamians here has largely fallen to charities and volunteers.

Oźlański watched as dozens of people streamed off the ship and grew increasingly worried as she didn’t immediately spot Lewis. A week earlier, dozens of Bahamian hurricane survivors had been kicked off a ferry bound for Florida because they didn’t have visas. The Trump administration has said it won’t consider providing Bahamians temporary protected status that would allow them to live and work in the U.S. while recovery efforts continue at home.

Oźlański feared U.S. customs officials may have stopped Lewis. She checked her phone repeatedly, hoping for a text or call. Finally, Lewis walked through a set of double doors pushing her son, Orlander Chandler, in a stroller. Oźlański and Lewis, neighbors from across an 80-mile stretch of ocean, smiled and greeted one another, then quickly made their way to an Uber.

Later, in an interview back at Oźlański’s apartment, Lewis recounted a harrowing escape from her family home in Freeport, on the island of Grand Bahama. During t

he height of the Category 5 storm, which made landfall on September 1, ocean water inundated her inland home — something no one expected. The most powerful storm on record in the Bahamas brought sustained winds of 185 miles and stalled for some 30 hours over Grand Bahama, pounding the island with relentless wind, rain, and surge.

As the floodwater quickly reached knee-level, its weight jammed the doors, trapping Lewis in her home. She tried calling 911, but couldn’t get through. That’s when she started to fear for their lives. As she weighed whether to retreat to the attic, two rescuers showed up and broke out a window. Lewis cradled her infant son just below her chin and waded out into the rushing, shoulder-height water. She remembers the taste of salt as waves crashed into her shoulders, soaking her son.

Orlander never cried, Lewis said. He just curiously looked around at the unfolding catastrophe and the home that he’d hardly gotten to know.

With help from a rescuer, Lewis managed to keep her balance and make it to the end of the street, where an ambulance was waiting to drive them to a church on higher ground. For the next two weeks, she bounced from shelter to shelter, first in Freeport and later in the country’s capital of Nassau. She ultimately decided to flee to the U.S. because she was worried about the high risk of contaminated water. Bottled water was in short supply, and there was no electricity to boil tap water. Lewis didn’t feel comfortable even bathing her son in it.

“His skin is very sensitive,” she said, stroking the newborn’s arm as he napped on a pullout couch. “I can’t trust that water.”

Lewis plans to stay in Florida until the power is restored in her neighborhood, although it’s unclear when that will be. She has enough money to support her and her son for a couple of months. Her mother and father stayed in Freeport to work on gutting their home, which Lewis said looked as if it had gone through a whirlpool.

It’s hard to imagine the long-term impacts the hurricane will have on the Bahamas, which was still recovering from Hurricane Matthew in 2016. Dorian reduced entire neighborhoods to rubble and flooded 70 percent of Grand Bahama, including the international airport. Tens of thousands of people have been left homeless. The official death count stands at 50, but 1,300 people are still unaccounted for. The consensus from people on the ground is that the death toll will skyrocket.

“Dorian came to break up families,” Lewis said. “My mom, this is her first grandchild. We’re supposed to be together. She’s supposed to be there helping me … It’s like we got to go and fight for our life now.”

Dorian was a slow-motion train wreck that human-caused climate change supercharged. Above-average ocean temperatures fueled the storm as it crept through the Bahamas at a sluggish 1 mph. And like hurricanes Harvey and Florence, Dorian offers a glimpse at the future of hurricanes in a rapidly warming world. Research shows there’s been a marked slowdown in the speed of hurricanes over both water and land, which increases the risk of heavy rain, flooding, and storm surge.

In an op-ed, climate scientists Michael Mann and Andrew Dessler called Dorian “truly a nightmare scenario — and a preview of the climate crisis to come.” 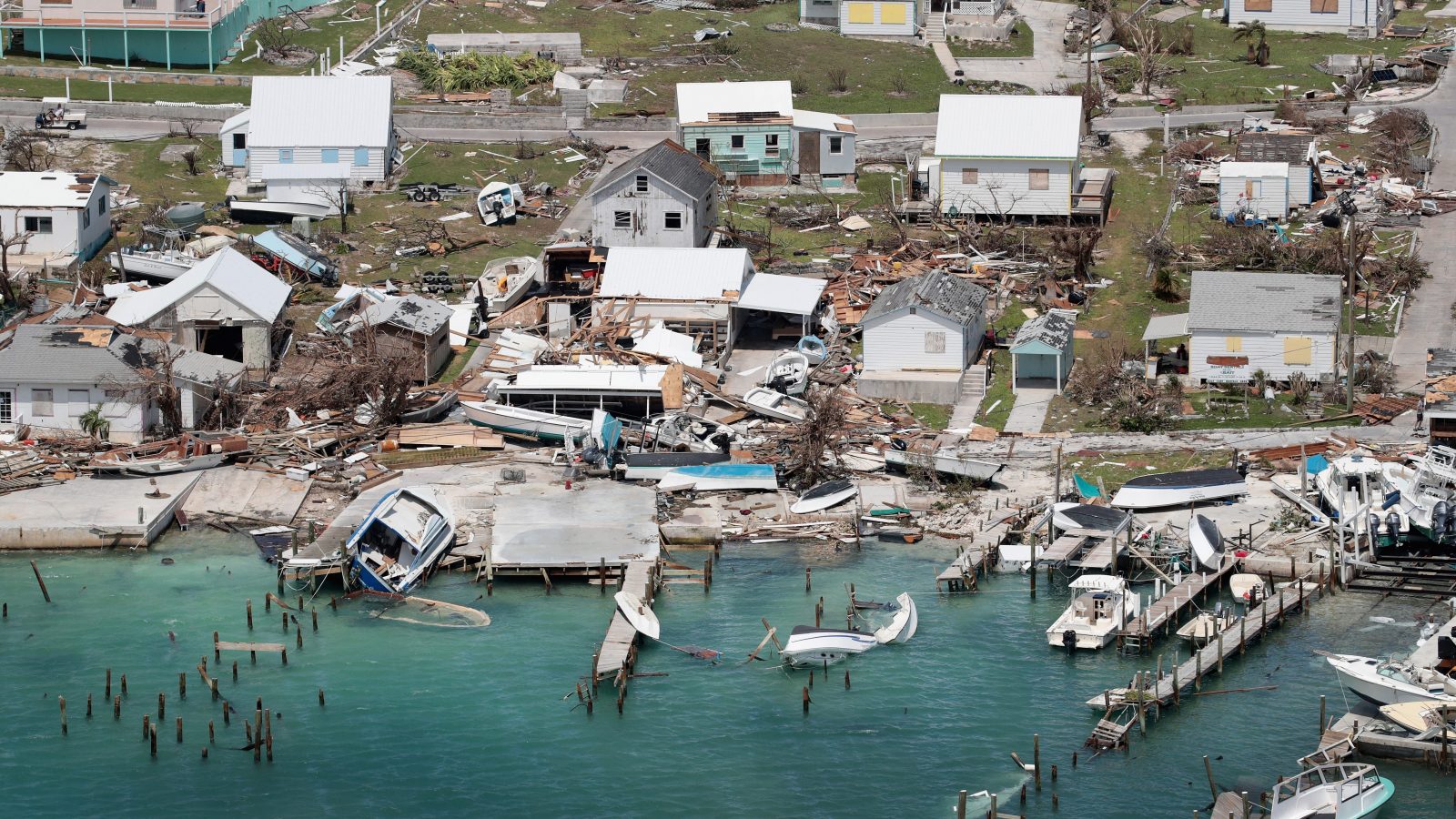 Bahamians HuffPost spoke to both in West Palm Beach and on Grand Bahama struggled to find the words to describe what they’d survived.

“This one feels like a work that is not of this world,” said Mervin Henfield, a pastor in the community of Eight Mile Rock on Grand Bahama. “We’ve never experienced anything like this.”

The storm also highlights the growing crisis of human displacement amid extreme weather and rising seas. An average of 24 million people has been displaced by catastrophic weather per year since 2008. That number is forecast to soar to between 140 million and 1 billion by mid-century. Yet international law does not legally define “climate refugee,” and there are major gaps in protection for those fleeing rising seas, drought, extreme weather, and other environmental disasters.

If the U.S. response over the last few weeks is any indication, the Trump administration will do little to support such climate refugees — not even those from neighboring, friendly nations. President Donald Trump said the U.S. must be “very careful” about admitting Bahamians and claimed, without offering any evidence, that Dorian refugees could include “very bad people and some very bad gang members and some very very bad drug dealers.” Defending the administration’s refusal to grant temporary protected status to survivors, Ken Cuccinelli, the acting director of U.S. Citizenship and Immigration Services, said the Bahamas “is a perfectly legitimate country capable of taking care of their own.”

Historically, U.S. policy allowed for Bahamians to travel to the U.S. without a visa, so long as they have a passport and proof of no criminal record. Confusion ensued after Hurricane Dorian when more than 100 Bahamians without visas were forced to disembark a ferry from Freeport to Florida. The ferry company, Baleària Caribbean, and U.S. Customs and Border Protection pointed the finger at one another. In a post to its website on September 9, the Department of Homeland Security clarified that Bahamians traveling to the U.S. by sea “must be in possession of a valid passport AND valid travel visa.” Those traveling by air from international airports in Freeport and Nassau don’t need a visa if other requirements are met.

Many Bahamians have family in Florida that can give them refuge but either couldn’t make the trip because they didn’t have proper documentation — many lost everything, including papers, in the storm — or were deterred by Trump’s comments, said Donnette Russell Love, a Bahamian and immigration attorney based in Florida. Her office has been bombarded with emails and phone calls from Bahama residents looking for advice.

America has long been a friend of the Bahamas, and the two have worked together on issues like drug trafficking and border protection. “As a neighbor, the Bahamas and its political stability are especially important to the United States,” reads the U.S. Department of State website. The relationship between South Florida and the island nation is even stronger. Many Bahamians make frequent trips to Florida to shop and the Bahamas is a major tourist destination for Floridians.

“It’s unfortunate at a time like this that [the U.S.] would not want to extend some kind of protection for them while they navigate this really tragic time in their history,” Love said.

Today, leaders from dozens of countries are gathered in New York City for the United Nations Climate Action Summit, where many will up their commitments to curb greenhouse gas emissions. The summit comes on the heels of last week’s massive global protest, in which millions of young people went on strike from school to demand climate action.

Outside homes, schools, and businesses across Freeport, waterlogged furniture, carpet, and drywall stood in towering piles — all ruined by the storm surge. Power is yet to be restored in many parts of town and many businesses are closed indefinitely. Residents HuffPost spoke to largely agree that the response from the Bahamas government has been inadequate and that a prolonged international response is needed.

“We are depending on our neighboring countries and allies to help us get back on our feet and reestablish ourselves. We need help,” Henfield said as he drove a load of food and other donations from an airstrip on the west end of Grand Bahama. “To help rebuild our lives we’re going to need the U.S.”