Is biking in the city worth breathing all the polluted air? 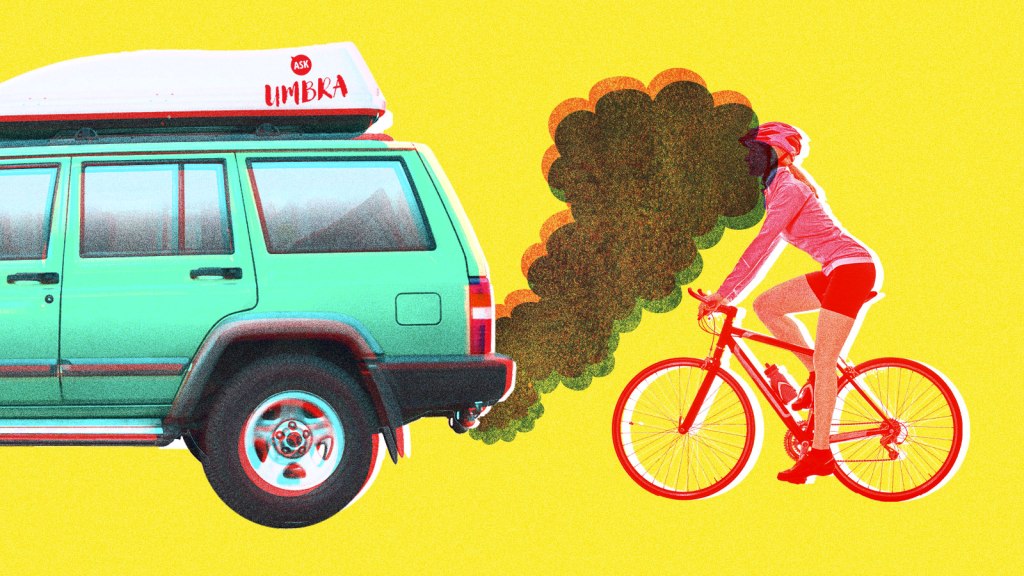 Is biking in the city worth breathing all the polluted air?

Do the health benefits of riding a bike outweigh the exposure to air pollution?

No environmental decision can just be simple, right? Using alternative transit like biking, walking, or busing instead of driving your car is one of the best things that you, personally, can do for the environment and your quads. But it also comes with risks, some of which may rule out biking as a viable option for plenty of would-be pedalers: suburban five-laners with no room for bikes, a poorly placed pothole, a thoughtlessly texting driver. And then there’s the whole breathing element.

Air pollution is definitively an overwhelming universal problem — whether you’re talking about fine particulates like smog and soot or the even-more-invisible pollutants like sulfur dioxide — and almost no one can escape it. A recent analysis from the World Health Organization found that 91 percent of the world has toxic air pollution above levels deemed to be safe. Air pollution has also been connected to infertility, cancer, and depression.

But while you’re right in pointing to air pollution as an important problem to factor into your daily life, it’s also harder to avoid than you might think. It’s no secret that certain regions, cities, and even neighborhoods suffer from higher air pollution burdens than others, and people exposed to higher amounts of particulate matter tend to be those disenfranchised due to their race or socioeconomic status. And it’s not even just an outdoor problem: You are exposed to air pollution inside as well, according to a New Yorker feature from last month.

The sum total of everyday activities that might be considered innocuous on their own — toasting bread, for crying out loud — can emit enough harmful particulate matter and carbon dioxide into the air to turn a kitchen into a place that would get a red flag from the EPA. (Well, maybe not the EPA of 2019.)

In short, you can’t run from all forms of air pollution. But does that make it a good idea to ride with them? I can relate to this kind of dilemma. I spend most of my day reading and writing about the insane breadth and variety of risks that fill up the world, from filling up our bodies with tiny bits of plastic to getting bitten by a psycho mutant tick, and I have personally come to the conclusion that fixating on all the ways we can minimize some of those risks on our small personal selves is — bonkers? A waste of mental space?

There is personal risk everywhere. And with air pollution, your choice is between breathing or not breathing, and one option has a 100 percent chance of death.

Please don’t read this as a criticism of you personally, because I don’t mean it that way. It’s a criticism of our cultural tendency to take on an interesting calculus: How does this thing that’s a huge societal or environmental problem negatively affect me, specifically? And what can I do to limit that?

Believe it or not, there’s actually a study that took on your very question about the health benefits of biking (ripped calves, strong heart) vs. huffing in polluted air (everything we already discussed), and found that the answer is yes, cycling is still worth it. Even in the most extreme cases — cities in the 99th percentile of particulate matter concentration — an hour-long bike ride is still considered to have net-positive benefits. (This graph from the Financial Times, which includes cities above even that level of pollution, lays it out pretty clearly.) According to this study from Salt Lake City, the average air pollution exposure from biking is about equivalent to driving with the windows open (makes sense), and less than riding the bus.

I don’t want to undersell the real health impacts of air pollution. Since you’re asking this question, I assume you are healthy enough to exist in polluted air without immense, imminent risk to your well-being. Not everyone is so lucky. For some — the elderly, people with asthma or other respiratory problems, or young children — a high-particulate-matter day can be a death sentence. And as we move from focusing on individual consequences to the well-being of the community, it’s worth asking about the root causes of the air pollution.

Naturally, combustion engine vehicles are a big part of the air pollution equation in most places. Not only do cars pump out particulate matter via their exhaust, but they also produce more than half of the country’s nitrogen oxide pollution, which is considered a harmful and common air pollutant. Other common causes of local air pollution include stationary point sources such as refineries, industries that emit harmful chemicals, and policies that allow polluting industries to expand unchecked.

Ideally, the decision to bike or not to bike goes beyond our own personal risks and benefits — it’s also about reorienting on what’s best for the environmental health of the community. Even though there’s a single study that essentially gives you the green light to pedal on your merry way with lower exposure than driving, another could theoretically come out tomorrow that says actually, PSYCH, never mind.

In that scenario, would you be justified in choosing to drive in order to slightly reduce your own pollution exposure? Remember, you’re going to get exposed to air pollution no matter what! You, yourself, can be less exposed to air pollution on your commute while you’re driving your car with the windows closed and pumping the air conditioner, but by doing that you’d be adding to the community’s pollution burden without even getting a whole lot in return. Eventually you have to leave your car, I’d imagine, and breathe the same air that everyone else does.

So perhaps you’ll allow me to slightly edit your question: Do the overall benefits of doing anything to help the collective outweigh the personal risks or inconveniences? In the thick of a climate crisis with precious few years left to escape the worst impacts of global warming, I say it’s a frame we need to be bringing to many more of our life choices.

In terms of biking, at least, the answer is thankfully simple and straightforward: If you’re able to, why wouldn’t you take one more car off the road and ride your bike? Yes, the health benefits happen to be in your favor, but you could also be justified in making your contribution to better air quality in your city completely regardless of personal reward. And as a biker, you’ll be more incentivized to push your city’s leadership toward better biking infrastructure and more room for alternative transportation — which is a case of self-interest actually serving collective good! Full circle, baby!

Ride your bike, vote in local elections, and wear a helmet. That’s my advice.