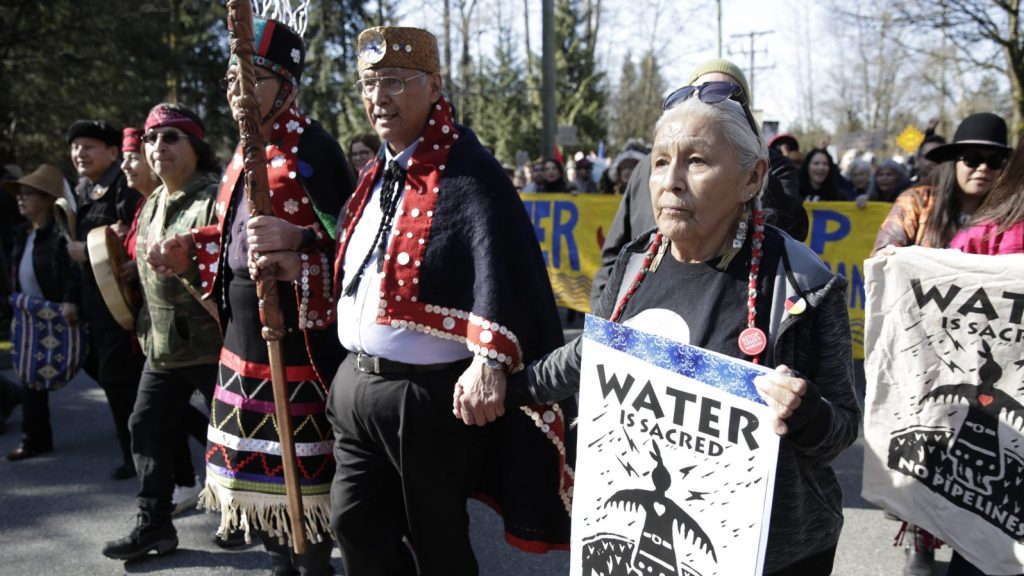 Jason Redmond / AFP / Getty Images
The Gloves Are Off

Canada is coughing up $3.5 billion to buy the floundering Trans Mountain pipeline expansion project from Kinder Morgan. Prime Minister Justin Trudeau had vowed “to get that pipeline built,” but pipeline resistance groups aren’t backing down, either.

The Houston-based company had stopped all non-essential spending on the project last month after facing broad opposition from environmental groups, indigenous communities, and the province of British Columbia. Canada says it plans to fund construction of the project until it can find another buyer to take over. If completed, it would nearly triple the pipeline’s capacity to transport crude and refined oil from Alberta to B.C.

Will George is a leader with the Tsleil-Waututh, which built a Watch House — traditionally used to monitor an enemy — atop Burnaby Mountain as part of their opposition to the pipeline. “If anything, we’re going to ramp up our demonstration and our movement,” George says. “We’ll do whatever it takes to stop this pipeline.”

Greenpeace, the Coast Salish Watch House, and other grassroots indigenous and environmental groups have already planned an emergency rally in Vancouver this evening.

Over the weekend, an oil spill at a pump station near Barriere, B.C., forced Kinder Morgan to temporarily shut down the existing Trans Mountain pipeline. Pipeline opponents are also calling out Trudeau for abandoning federal commitments to take action on climate change and respect the rights of indigenous nations.

“It’s an outrageous and reckless decision by the Canadian government. This was a government that stood up in Paris and promised climate action. It’s a government that committed to the U.N. declaration on the rights of indigenous peoples,” says Mike Hudema, climate and energy campaigner at Greenpeace Canada. “Today it is breaking both of those promises by not just supporting a pipeline but buying a new massive tar sands pipeline project.”