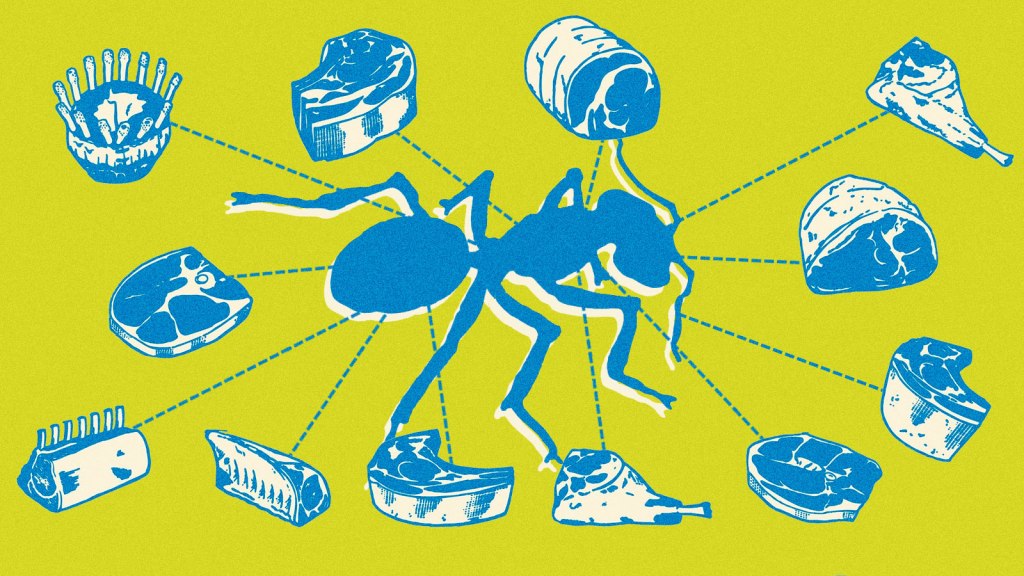 Natalie Rubio pushes through the glass revolving doors of Tuft’s Science and Technology Center. Her feet take her on autopilot through the atrium and up a flight of stairs to the culture lab to check on her current project: T175 cell culture flasks of insect muscle cells growing on a mushroom chitosan scaffolding.

The definition of “meat,” of course, is changing as the demand and technological ability to produce lab-grown proteins expands. Even before the ‘80s gave us “Gardenburgers,” people were playing with the idea of in-vitro meat. In 1931, Winston Churchill predicted that we’d all be eating lab-grown meat in half a century. His estimate may have been a little off, but the reasoning behind investing in cultured cuts of meat makes efficient sense: Why raise a whole chicken when you could just cut to the chase and just grow drumsticks?

It makes environmental sense, too. Meat is notorious for its resource-intensive production, which is associated with cow-burping methane — a greenhouse gas at least 25 times as heat-trapping as carbon dioxide.

With all that in mind, it seems like growing meat in a lab could represent the best of both the culinary and environmental advocacy worlds. You get the great taste of meat (peace out, Gardenburgers!) without the environmental costs of livestock. That is, in theory. You see, there’s a few caveats. Even almost 90 years after Churchill’s prediction, we still don’t have the wherewithal to produce lab-grown meat in a cost-effective, scalable way. n fact, a study from earlier this year found that cultured meat might actually have a larger carbon footprint than conventional meat. But those estimates are based on cultured meat made from bovine cells. Insect proteins represent a whole new frontier — one Rubio believes might flip the scales in favor of lab-grown meat.

The “Eureka” moment for Rubio’s research occurred after she left her cell cultures unattended over a couple weeks while she was on vacation. While mammalian cells need feeding every few days in order to thrive in a lab setting, she discovered that the insect cells did just fine with just an initial feeding — even after 25 days of neglect. While she initially was looking into insect cells as bioactuators, or muscle grown for robotic joints, her discovery made her switch gears: If insect cells were this easy and cost-effective to grow, could that solve the biggest problem lab-grown meat was currently facing?

Could lab-grown insect meat be the humane and efficient protein a rapidly warming world so desperately needs?

Cultured meat made of bugs may sound weird to protein aficionados, but from a biological standpoint, it makes a lot of sense.

In the cellular research club (I know, you wish you were cool enough to join), it’s unanimously agreed upon that insect cells are much easier to work with. They’re easy to grow and hard to kill, with fewer temperature, pH, and oxygen, and carbon dioxide constraints, not to mention the fact that they survived for weeks without feeding. The method of metabolism in insect cells is also more conducive to mass production, relative to animal cells. Because of this, they’re commonly used in cellular research, especially in work that involves protein production and bioactuators.

Rubio, with some help from other researchers, grew in vitro insect muscle cells on a mushroom-based scaffolding that gave the bug “meat” texture, and just as importantly, is as sustainable and scalable as insect cells. The cells grew quickly and prolifically while being fed a much cheaper and easier to produce formula than mammalian cells. Rubio suspects that the texture of insect muscle, if combined with fat that can be grown in cultures the same way, could produce a very palatable and nutrient-dense protein source.

As exciting and promising as these findings are, however, there was one small hiccup along the way. While animal cells may not grow as well, they have no trouble differentiating — that is, becoming a specialized cell, like a muscle cell. Though insect cells grow like crazy, Rubio found, it’s hard to get them to stop and take on the specialized characteristics of muscle cells that would be classified as what we might call “meat.” A big part of this may be the lack of study in the area — most insect cells are grown as protein-producing factories, and a few studies involve insect-cell bioactuators. While the triggers to initiate mammalian cell differentiation have been studied in depth, there have been few studies of stimulating insect cell differentiation. Nonetheless, Rubio says it’s only a minor setback.

Rubio’s findings were published in Frontiers in Sustainable Food Systems in mid-April. In the weeks after publishing, she and David Kaplan, a Tufts professor and head of the lab where Rubio works, were bombarded with interview requests by reporters, other research groups, and agencies interested in scaling up the operation. Both scientists were surprised by the response. Kaplan saw it as a sign of the growing need for new ideas in the food industry.

“I think people were really excited to see a fresh perspective,” Rubio said. “Can we think outside of the box? What does this technology mean … for new types of food?”

Despite the cellular potential of insect proteins and the flurry of attention lab-grown insect meat has recently received, not everyone is convinced it’s the way of the future. The Good Food Institute, a nonprofit that is working towards developing “clean meat,” told Grist that while the group is “officially in favor of using insect cells as a tool to advance cell-based meat innovation,” they are currently “agnostic” about the marketing potential for cultured insect meat.

Kaplan agrees that cultured insect meat is a long way from appearing in your grocery store. He says the next step is for researchers to assess the qualities of meat that make people find it so appetizing. Then, researchers like Kaplan can work towards giving insect meat those appealing characteristics.

We might not be eating lab-grown insect steaks today, or tomorrow, or the next day. But it seems more than likely that insect cells were destined for more than just robot muscles and protein factories.

“We tried to stay very focused on building just a strong fundamental scientific base for what we do,” Kaplan said. “And then hopefully, companies out there or others will, you know, piggyback on that. And everyone benefits. That’s kind of our goal.”