The unexpected culprit that could throw a wrench in the world’s efforts to stop climate change? Runaway methane levels. Researchers monitoring air samples have noticed an alarming observation: Methane levels are on the rise and no one’s quite sure why.

NOAA’s Earth System Research Laboratory scientists have been analyzing air samples since 1983. Once a week, metal flasks containing air from around the world at different elevations find their way to the Boulder, Colorado, lab. The scientists look at 55 greenhouse gases, including methane and its more-famous climate villain, CO2.

You might know methane as the stuff of cow farts, natural gas, and landfills. It’s also an incredibly potent greenhouse gas, absorbing heat 25 times more effectively than CO2. While the rise of carbon dioxide has been stealing the spotlight as of late, methane levels have also been on the incline.

Methane levels, not surprisingly, have been steadily rising since the Industrial Revolution. Things picked up in 1980 and soon after, the NOAA scientists began consistently measuring methane. Levels were high but flattened out by the turn of the millenium. So when levels began to increase at a rapid rate in 2007, and then even faster in 2014, scientists were baffled. No one’s best guesses came close to predicting current methane levels of around 1,867 parts per billion as of 2018. This means studies evaluating the effects of climate change and action plans to address them, like the Paris Climate Agreement, may be based on downplayed climate crisis forecasts. 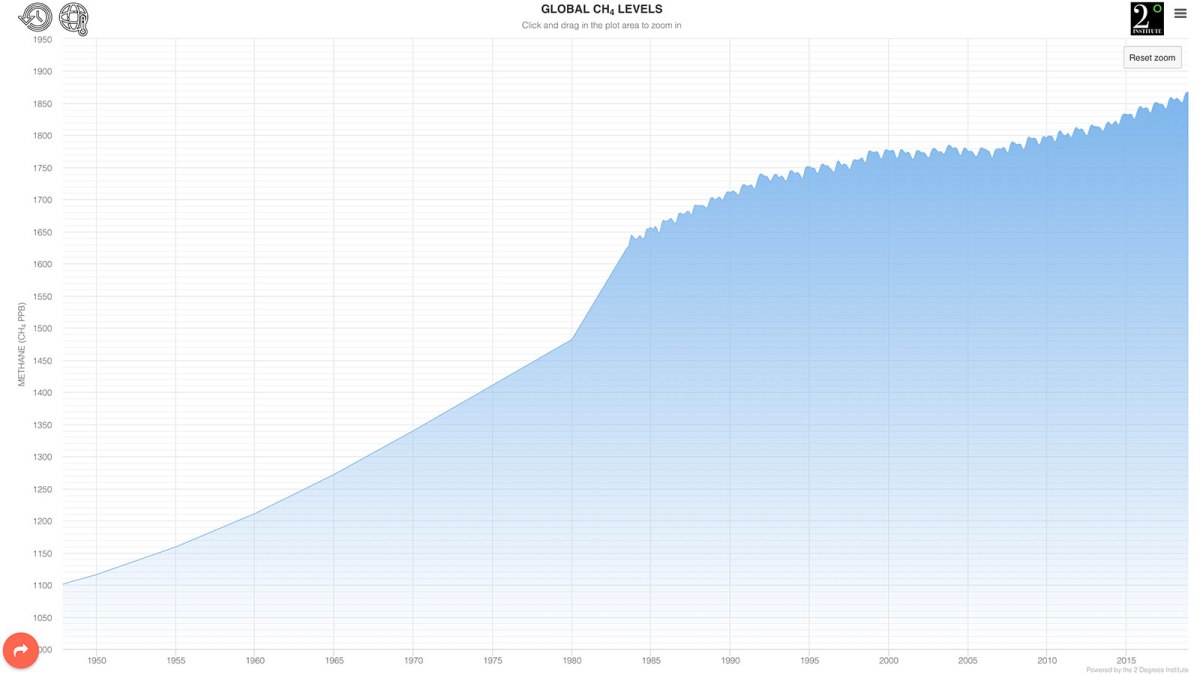 Methane levels from 1950 to present. 2° Institute

So what’s the big deal? Carbon dioxide emissions are relatively well understood and can be tracked to various human activities like transportation and electricity, which means policies can be enacted to target and lower emissions. Pinning down the source of methane, on the other hand, is a little more complicated.

“The really fascinating thing about methane,” Lori Bruhwiler, a NOAA research scientist, told Undark, “is the fact that almost everything we humans do has an effect on the methane budget, from producing food to producing fuel to disposing of waste.”

As if things weren’t complicated enough, a study published in AGU100 distinguished microbe-produced methane from fossil fuel methane — historically the more abundant one — and found that “natural” methane had taken the lead. This unexpected result might explain the upticks in methane levels that do not seem correlated with human activity. Of course, it could also be any number of human-made causes, including warming temperatures freeing up the gas and more frequent floods amplifying the methane output of wetlands.

Natural methane or not, this finding doesn’t exonerate anyone. The study’s authors made that clear in their concluding remarks.

“If the increased methane burden is driven by increased emissions from natural sources,” they wrote, “and if this is a climate feedback—the warming feeding the warming—then there is urgency to reduce anthropogenic emissions, which we can control.”

Curbing methane could be a powerful tool in our upcoming climate fight. Since the greenhouse gas is relatively short lived, only around 12 years, versus the 20 to 200 years of CO2, and is more effective at trapping heat than carbon dioxide, addressing methane emissions could be effective as a short-term climate remediation tool. The first step? Bringing more attention to methane so we can figure out where it comes from and nip it in the bud.