Pete Buttigieg, the mayor of South Bend, Indiana, likes to imagine what America will look like in 2054, the year he’ll be 72, the same age as the current president.

Will aging millennials still be paying off student debt as they apply for shrinking Social Security payments? Will Miami be a modern-day Atlantis beneath the swelling seas?

The whole thought experiment makes more sense once you know that the 37-year-old Buttigieg is running for president. Because odds are you didn’t. Buttigieg is one of many underdogs vying for the 2020 Democratic nomination, and the youngest one to boot. His campaign is underpinned by the concern that young people today will likely be stuck with the problems created by older generations, especially climate change. Who better to fix them than a millennial like Buttigieg — a Navy vet and Rhodes Scholar — who understands what’s at stake?

“You can’t just hope it’s gonna take care of itself if you’re concerned about how life is going to unfold for us all,” he said at a recent event in Seattle. In other words, when you adopt the concerns of the younger generation as your own, then you reach different conclusions. The state of the union in 2054 becomes your problem, so you start thinking long-term instead of short-term. “I fear that that perspective is not being taken on by people in power today,” he said.

After the 2016 election, then-President Barack Obama told the New Yorker the names of four gifted Democratic politicians he saw as future party leaders. Three were senators in their 50s, and one was Buttigieg. But he’s still far from a household name. A recent poll of the 2020 Democratic primary field had him pulling in 1 percent of the vote. Should he defy the odds and win, Buttigieg would be the first openly gay president, though he wouldn’t be the first one with a funny name (it’s hard to top Millard Fillmore).

The surname “Buttigieg,” pronounced boot-uh-judge, is Maltese and translates to something like “lord of the poultry.” So Buttigieg is known as “Mayor Pete” among South Bend locals.

To learn about the two-term mayor’s vision for taking on the unfolding climate crisis, as well as what he learned from tackling environmental issues at the local level in a red state, Grist asked him about it over the phone.

Two big floods hit South Bend in the past couple of years — floods that “should happen once in a lifetime, if that,” Buttigieg told me. So when he thinks about climate change, he remembers a family on the porch of their flooded house in South Bend, the night before the first day of school. “The family’s trying to figure out how to cope with being displaced because the flood has made their house unlivable,” he said.

As Indiana warms, research shows, more devastating rains are in store. That’s a problem for South Bend, a city whose old stormwater system wasn’t designed to handle these deluges, and where heavy rains keep sending sewage into the St. Joseph River.

Buttigieg had inherited an expensive stormwater infrastructure plan that the city couldn’t afford. So he prioritized “finding a cost-saving and environmentally-friendly solution to the stormwater problem,” said Therese Dorau, director of South Bend’s sustainability office. In 2017, he proposed a greener plan to manage floods with permeable concrete, rain gardens, and tree plantings — and in the process, saved hundreds of millions of dollars, Dorau said.

Buttigieg recently wrote a New York Times-bestselling memoir about his mission to revitalize his hometown, called Shortest Way Home: One Mayor’s Challenge and a Model for America’s Future. In 2011, the year Buttigieg ran for mayor, Newsweek listed South Bend as one of “America’s dying cities” because its economy had never fully recovered after a major car manufacturer left town in the 1960s. “I grew up at a time when people felt like success meant getting out,” Buttigieg told Politico. 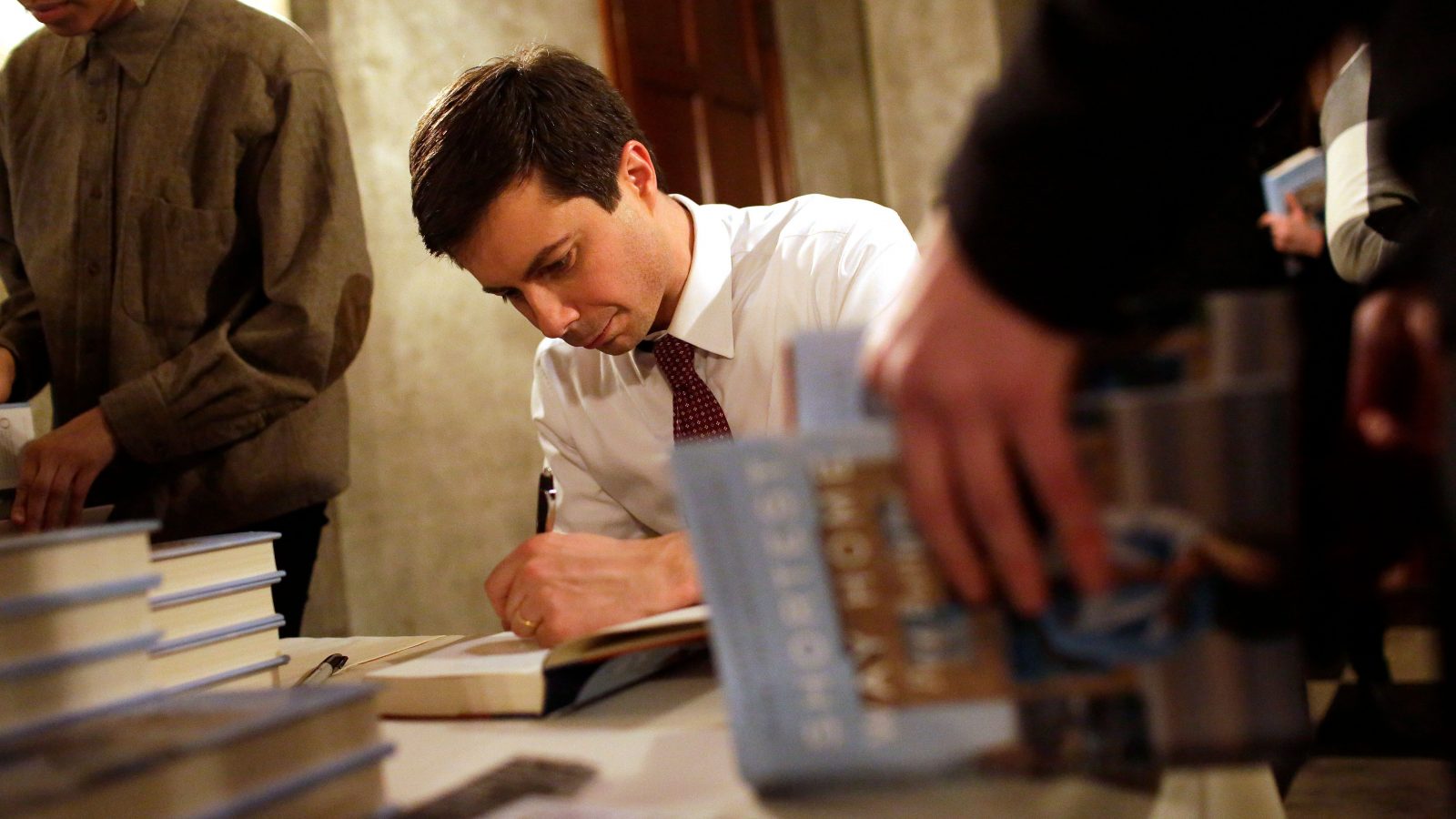 Since he took office in 2012, South Bend’s unemployment rate is half of what it was, and its population is starting to grow again. Buttigieg initially got to work on fixing the town’s abandoned building problem, demolishing and repairing 1,000 houses in 1,000 days. He’s taken advantage of the fiber optic cables running beneath town to transform it into a tech center dubbed the “Silicon Prairie.” “He loves to call us a beta city,” Dorau said. He’s installed a couple of free electric vehicle chargers downtown and has spent millions on greener buildings, parks, trails.

He also spearheaded an effort to revive the city’s downtown with a $25 million project to make streets more appealing for businesses and safer for pedestrians and bikers, even as citizens complained about the big cost, the roundabouts, and the slower traffic. Buttigieg, for his part, intended to slow down cars — he’s fond of pointing to research showing that slower speeds are safer.

To be sure, he’s not without critics. As some observers have pointed out, Buttigieg scolded Democrats after the 2016 election for fixating on winning the White House while overlooking local and state seats. But now, rather than running for governor of Indiana as some had predicted, he’s aiming for an improbable presidential campaign. He wants to eliminate the Electoral College, arguing that it’s undemocratic, and he probably wouldn’t mind kicking Vice President Mike Pence out of office (Buttigieg seems to have a vendetta against Indiana’s former governor).

Buttigieg speaks seven languages conversationally, including Spanish, French, Italian, Maltese, and Norwegian (he told MSNBC he’s a little rusty on Arabic and Dari, which he picked up during his military service in Afghanistan.) Given this linguistic dexterity, it’s no surprise that Buttigieg has some tips for changing the way we talk about climate change.

“Often people picture the sort of thing you see on the B-roll on cable news – images of ice shelves in the Antarctic and polar bears,” Buttigieg said. “I think what we need is images of families in the U.S.”

Buttigieg knows that there’s “already a very passionate community of interest” around environmental issues, but said it’s important to broaden the conversation beyond, you know, environmentalists. “What you have to do is make it less and less of a specialty concern, and more and more something that’s part of everyone’s life.”

“We need to talk about this not just as an issue of technology or science, but as an issue of justice,” he said. “We gotta recognize that one of the obligations we have as human beings — and one of the most ennobling things about government when it’s working well — is the importance of not just taking care of the vulnerable, but making them less vulnerable.”

The changing climate is making the international environment less stable and less secure in countless ways, Buttigieg said, pointing to wildfires in California and droughts in the Middle East. “I think that anyone who uses the word ‘security’ in a 21st-century context had better be able to explain what they would be doing about climate change,” he said.

In previous presidential elections, Buttigieg might have had that issue all to himself. This year, the competition is thick. There’s Governor Jay Inslee of Washington state, who’s running an explicitly climate-oriented campaign. And there are big-name 2020 contenders backing the Green New Deal resolution in Congress, like senators Elizabeth Warren of Massachusetts and Bernie Sanders of Vermont.

Buttigieg pointed to some unsexy but extremely practical fixes, like building retrofits, where everyone ends up being a winner: “Right now, we’ve got Americorps volunteers in South Bend retrofitting homes of low-income residents in ways that improve our carbon footprint but also improve the economic well-being of those around us.”

As a presidential candidate, Buttigieg has called for billions’ worth of investment in research and development to lower the cost of solar and other renewable technologies. He also wants every American home to be a “net zero” energy consumer, with each roof lined with solar panels. “Uncle Sam is gonna mail you a kit,” he told Yahoo News (that’s assuming he manages to get elected).

“The broader thing is to make it clear that there are opportunities, especially for working people and industry, that lie in the possibilities of dealing with this issue in the same way that the arrival of World War II was part of what made it possible for America to lift itself out of the Great Depression,” he told me.

“It shouldn’t require a war for our country to mount that level of effort,” he said. “Unlike something like the Great Depression or World War II, this time we see it coming. Shame on us if we don’t find a convincing solution and act with great urgency and national unity.”

It’s an ambitious message. But the homegrown Indiana politician thinks that he can reach the Midwestern voters that coastal Democrats can’t. To illustrate his potential appeal with Trump voters, he likes to point to the 2016 election: Voters in his county were pretty evenly split on the presidential candidates but re-elected him with 80 percent of the vote.

President Trump’s “Make America Great Again” slogan gets it wrong, Buttigieg said in Seattle. The secret to revitalizing flyover country isn’t reviving the coal industry. “The first thing you have to do in order to get there is to acknowledge that the future you’re trying to build is not as simple as rewinding to something you used to have.”