The latest Democratic contender is all climate all the time 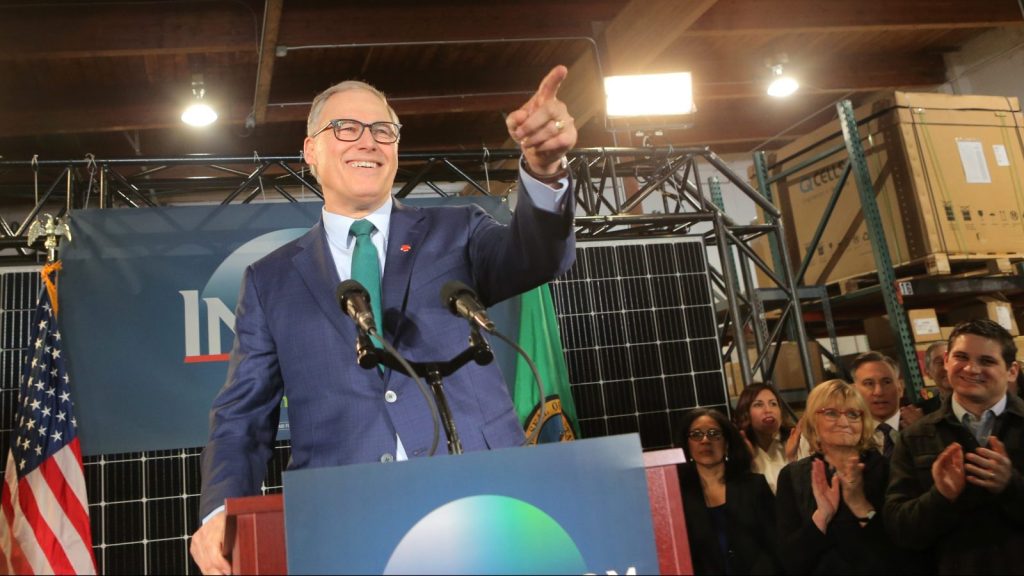 The latest Democratic contender is all climate all the time

Washington Governor Jay Inslee announced he was running for president on Friday from the warehouse of a solar company in South Seattle — a historically diverse area of the Pacific Northwestern hub.

The event was more press conference, less political rally, and almost strikingly devoid of bells and whistles — especially compared to the splashy announcements held by other presidential hopefuls, like Kamala Harris and Elizabeth Warren. Attendees followed the sound of chatter behind A&R Solar’s street-front office to a work yard out back, where the sun beat down on stacks of solar panel building materials. Journalists, Seattle-area politicians, A&R employees, and a few politically inclined citizens crowded onto the warehouse floor, where Inslee, positioned in front of a solar array, spoke for around 30 minutes about the issue he’s building his campaign around.

Inslee is hoping to set himself apart from the increasingly crowded 2020 Democratic field by running as the climate change candidate. “There is no other issue that touches so much of what we care about,” Inslee told the raucous crowd of roughly 100 people. “It’s just as much a matter of equity as it is a matter of ecology.”

By using climate as a lens for approaching issues that might hot closer to home for many voters — like health care, jobs, education — Inslee is positioning his platform to appeal beyond just the environmentally-inclined. “Climate change is not more important than the economy,” he said, noting that his focus on climate doesn’t make him a single-issue candidate. “It is the economy.”

His track record as Washington’s progressive, climate-oriented governor could help him galvanize support for his presidential bid. “If America wants to see a Washington that actually works,” Inslee said, “look West to Washington state.”

Case in point, as he made his announcement, the Washington state senate voted to approve clean energy legislation proposed by the governor. The bill will eliminate natural gas and coal from the state’s energy mix by 2045. A few hours after he left the stage, a second of his climate bills, a proposal to reduce hydrofluorocarbons — a group of especially powerful industrial greenhouse gases — passed the House 55 to 39. Still, Inslee has supported multiple failed efforts to pass a carbon tax in Washington, including a ballot measure that voters rejected this past November.

In his remarks, Inslee made reference to the Green New Deal — a plan to deal with warming and jumpstart the economy that is popular among progressives and a clutch of high-profile 2020 candidates — as evidence that climate is becoming a household issue. “Americans are calling for this,” he said. “Americans are mobilizing across the country.”

But the governor did not explicitly endorse the proposal. Instead, he unveiled a four-pronged plan to tackle rising temperatures that has a great deal in common with the Green New Deal resolution introduced into Congress earlier this month by Representative Alexandria Ocasio-Cortez and Senator Ed Markey last month.

Inslee pledged not to take any money from the fossil fuel industry throughout his campaign, and he upped the ante for his prospective presidency: “Not one nickel of taxpayer dollars will go toward subsidizing oil and gas.”

The Democrat, who until recently was chair of the Democratic Governors Association, took a break from climate change to discuss paid family leave, health care, taking on the NRA, and legalizing marijuana nationwide. But he quickly came back to his climate platform.

While the governor’s unyielding emphasis on climate change might be a turn-off for some, those who came to hear him speak seemed enthusiastic about his laser-focused platform. “I think it’s a great idea,” said Kim Mead, head of the Washington Education Association, an 82,000-member teachers union. “It’s something we haven’t been paying enough attention to, and it’s something that’s the future for our kids, too.”

Inslee’s bear-hugging of climate has won him the support of Charlie Lapham, the 28-year-old director of communications at the Martin Luther King County Labor Council. “There are a lot of candidates in the Democratic field supporting climate,” he said. “They say it’s this issue that’s going to threaten our existence, but then it’s their number-four or five priority.”

Jesse Anderson, a 34-year-old project engineer at A&R Solar, hasn’t quite made up his mind if he’s supporting Inslee for president, but he likes a lot of what he hears. “I feel like he supports the cause for the industry that I work for,” he said.

Still, Anderson isn’t quite on the same page as Inslee about climate change being the number one priority for the nation. That sentiment is among the biggest challenges to the Washington governor’s candidacy, in addition to low name recognition and the fact that he’s executive of one of the deepest of blue states.

“There’s a lot of priorities,” Anderson said. “I think it’s definitely up there.”

For Inslee, obviously, nothing else comes close to stopping climate change. To wit, as those assembled made their way out of the warehouse and onto the street, a man quipped about the governor’s speech: “It sure was easy to figure out what his priorities were.”