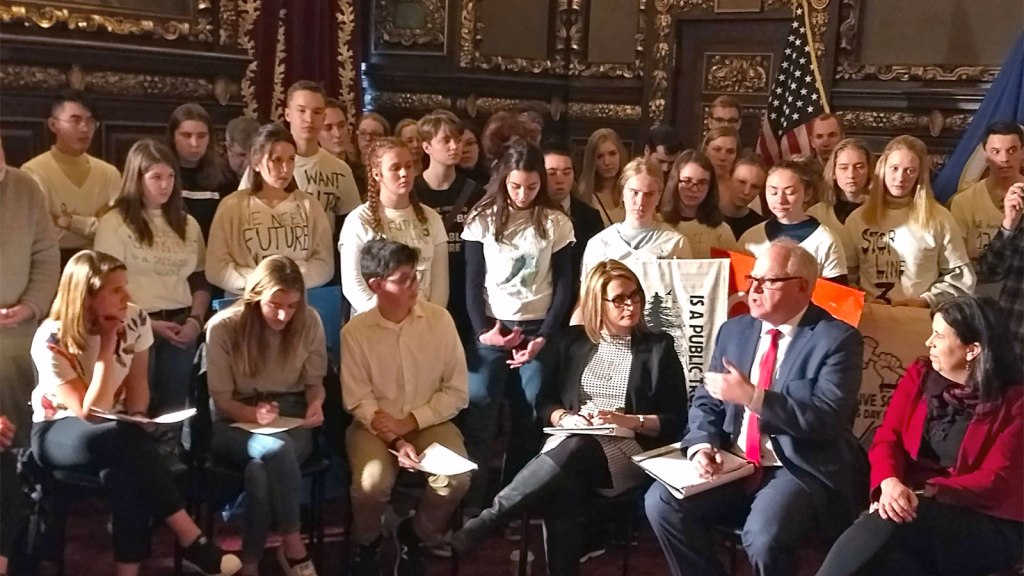 On Wednesday, more than 100 youth from across the state ascended the snow-free steps of the Minnesota capitol building to meet with newly inaugurated Governor Tim Walz and demand comprehensive action on climate change.

The group, Minnesota Can’t Wait, was there to push for a Green New Deal. Organizers called it the country’s first youth-led, state-level effort to demand the policy, which pairs labor and environmental justice efforts. In response to the meeting, Walz announced that he would immediately establish a statewide cross-agency working group on climate change.

Minnesota’s winters are warming faster than almost anywhere else in the country. In their conversation with the governor on Wednesday, youth spoke of their love of outdoor ice skating and dog sledding, but also their fear of the rise in infectious diseases and climate disasters.

Minnesota Can’t Wait wants state government to tackle the issue from all angles: In addition to pressuring the governor and legislature on Green New Deal legislation, the group calls for a ban on fossil fuel projects and executive action to regulate emissions. The demands are in line with what IPCC scientists say is necessary to stabilize global warming at 1.5 degrees C, the point above which change is expected to become large enough to disrupt society at a grand scale.

“The idea is that we stop making decisions based on what is politically possible and start doing what is necessary,” said Lia Harel, age 18, from Hopkins, Minnesota. “That’s been the driving force in getting these youth to act, because we don’t have time to wait any more.”

The event was inspired by sit-ins organized by the Sunrise Movement in congressional offices in Washington, D.C., and around the country in recent weeks, and wasn’t originally intended to include a meeting with the governor. However, a representative from Climate Generation, a Minnesota-based youth organization that helped plan the event, said that once organizers informed the governor’s office of a planned sit-in, the governor offered instead to meet with the young people.

“What you’re asking for is concrete changes, which is what you should be asking for,” Walz told the youth. “This move is a tangible evidence of where we are going to go.”

Minnesota’s new state legislative session kicks off with Democrats just one Senate vote away from total control, and a new House committee explicitly focused on climate change for the first time.

“I met with youth climate leaders several weeks ago,” said Jean Wagenius, the state representative chairing the new House climate committee, in an email to Grist. “We will be working with them to rapidly accelerate efforts to reduce climate change gases.”

Lieutenant Governor Peggy Flanagan, who is a member of the White Earth Band of Ojibwe and the highest-ranking Native woman ever elected to executive office in U.S. history, attended the event, too. Flanagan said the issue of climate change was especially personal for her. Her tribe has fought for years to protect their lands from pipeline development, and now, she hopes the inclusive approach demonstrated on Wednesday could be a model for other states.

“We talk about having a table where the people who are directly affected by issues can pull up a chair and make sure that they’re seen, heard, and valued,” Flanagan said in an interview with Grist after the event.

That willingness from elected leaders to listen to youth describe the need for radical climate policy has been rare so far. With federal action toward a Green New Deal seemingly stalled for now, youth are hoping for quicker progress at the state level.

That could happen in Minnesota. In Walz’s inauguration address this week, he made a clear call for bold climate action. “Instead of burying our head in our hands when it comes to our changing climate or to providing affordable housing, accessible healthcare and good-paying jobs, we must tackle them head on,” Walz said.

Towards the end of his conversation with Minnesota Can’t Wait, Walz asked the youth to go back to their communities and make the case for the radical change that would benefit future generations as well as the state’s current economy.

It helped that his daughter, Hope, was also there, on her 18th birthday. At one point, she raised her hand, stood up behind her father, and said, “I’m just going to ask how I can get involved with the group, you know, so there’s a better chance of him following through.”