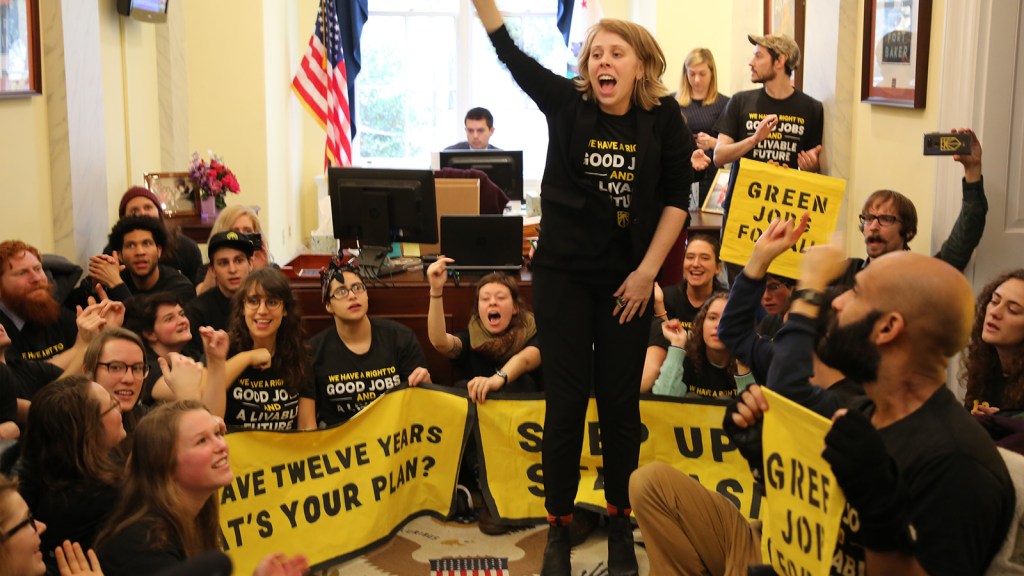 The young climate activists clustered into California Representative Nancy Pelosi’s office this week to demand a “Green New Deal” hadn’t wasted any time. As soon as it became clear that Democrats will have a majority in the U.S. House of Representatives, they descended on Washington to exert whatever clout they had.

The protest in Pelosi’s office was organized by the Sunrise Movement, a group of young people who have been pushing for climate action for a little over a year. They may have some sway with Pelosi, who issued a supportive statement while they were occupying her office on Tuesday. But with a Republican-held Senate and Donald Trump in the White House, the chances of enacting meaningful climate legislation next year are close to zero. So what’s their strategy here?

Varshini Prakash, Sunrise’s co-founder and communications director (and one of our Grist 50), said they have two objectives. First, they want all Democrats in leadership positions to stop accepting contributions from fossil fuel interests. And they want Pelosi to back something along the lines of a “Green New Deal,” a massive government mobilization to build a new, non-polluting, economy while also creating jobs.

Prakash said she was under no illusions about Pelosi’s ability to drive a climate bill through a Republican-controlled Senate, but she believes both of the group’s objectives could still be satisfied. Politicians don’t need anyone’s permission to stop taking oil money, and Democrats could set up a select committee in the House to begin laying the groundwork for a massive climate jobs program. As it happens, Alexandria Ocasio-Cortez, the newly elected Representative from New York, joined the protesters outside Pelosi’s office, and has already proposed such a committee.

House Democrats need to start hammering out policy now, Prakash said, so that they will have strong legislation to pass when climate-conscious politicians take the Senate. In the meantime, Sunrise will be building a campaign to elect politicians who will support their cause at both the state and federal level. “This is definitely not a one-off event,” she said.

In a statement, Pelosi said she welcomed “the presence of these activists” and noted that she has already recommended reviving a select committee on climate change, which Republicans disbanded when they took the House in 2011.

That’s not enough for Prakash. “The old committee was toothless,” she said “It had no funding and no ability to put forward legislation — its purpose was to make connections and raise awareness. The time for messaging to the public about climate change is over, we need action.”

Pelosi’s office had no comment when we requested a response, but Representative Frank Pallone, a Democrat from New Jersey, told reporters that even Pelosi’s proposal for a select committee goes too far. It’s unnecessary, Pallone said, because the environmental policy committee he is expected to lead can handle the job.

In her statement, Pelosi said that many Democrats had campaigned on something that looks very much like a Green New Deal. “House Democrats ran on and won on our bold campaign for a $1 trillion investment in our infrastructure that will make our communities more resilient to the climate crisis, while creating 16 million new good-paying jobs across the country.”

Environmental journalist Mark Hertsgaard, who might have been the first person to use the term “Green New Deal” back in 1998, said Pelosi needs to embrace the rhetoric of young activists if she wants this idea to take fire.

“The next step is to get Pelosi to use those words, Green New Deal,” Hertsgaard said. “She’s already on board, but her statement about 16 million jobs and $1 billion investment in infrastructure, that’s policy wonk talk out of Washington.The average person can understand what a Green New Deal is.”