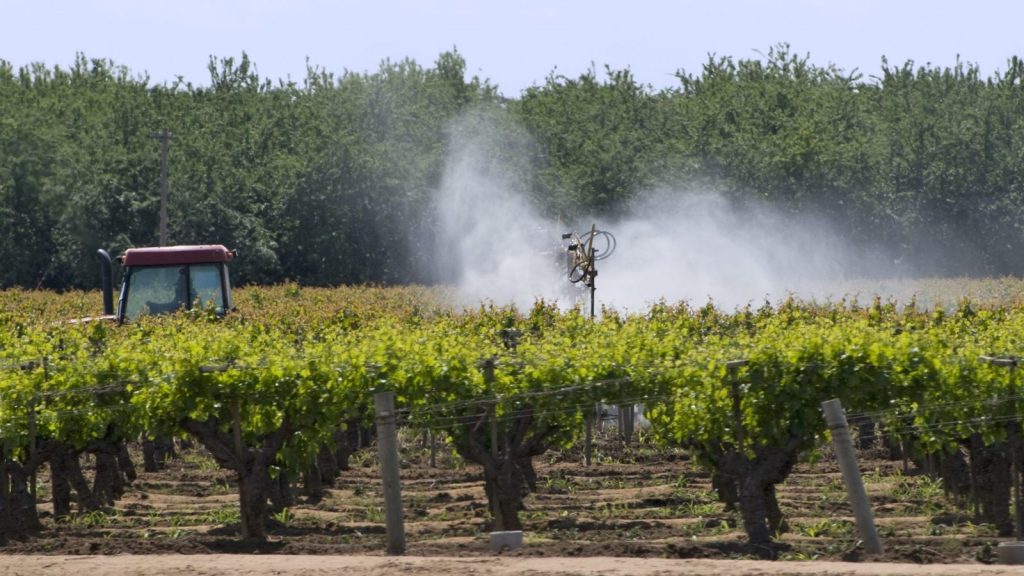 Elisa Rivera’s face swelled up, her eyes watered, and soon she was struggling to breathe.

The 39-year-old first started to feel ill when the smell of pesticides drifted from nearby Fresno county fruit orchards on a recent afternoon: “We experience this all the time. People get used to it.”

Rivera and other activists have been fighting for years to stop the spread of toxic chemicals in California’s Central Valley, and they are hoping this kind of sickening drift will become less common following an unprecedented victory they won last month. California announced in May it was moving to ban chlorpyrifos, a pesticide that is linked to brain damage in children and is sprayed on almonds, citrus, cotton, grapes, walnuts, and other major crops.

The Golden State’s prohibition is a stand against the Trump administration, which has supported continued use of the chemical. Central Valley organizers are now pushing California to prevent hazardous materials from replacing chlorpyrifos. They’re hoping their movement can be a blueprint for grassroots activists across the U.S. of how coalitions can tackle environmental dangers – and the systems that enable their spread.

“This is a lot bigger than banning chlorpyrifos,” said Rivera, who is part of the Coalition Advocating for Pesticide Safety (CAPS). “We have so much on the line, and we’re tired … Children are being poisoned.”

Chlorpyrifos, introduced in 1965, is very effective at treating pest infestations, but can have serious consequences for unintended targets. The neurotoxic chemical was found to be harmful enough to humans that the U.S. government banned it from residential use in 2000.

But its widespread usage in the agricultural industry continued in California, where a majority of America’s fruits and nuts are grown and where regulators have long defended its safety.

Studies, however, increasingly raised doubts. Pregnant women who lived near farms that sprayed chlorpyrifos had increased risks of having a child with autism, University of California, Davis, researchers found. Other studies showed that low to moderate levels of exposure during pregnancy were tied to memory problems and lower IQs. Chlorpyrifos was also linked to reduced breathing capacity.

“Researchers were studying real families in California and identifying real problems caused by exposure … and yet it has been on the market all this time,” said Caroline Cox, senior scientist at the Center for Environmental Health. “Children are going to be dealing with these things for the rest of their lives.”

Under the Obama administration, the Environmental Protection Agency proposed an agricultural ban on chlorpyrifos based on this research. But Trump’s EPA denied the conclusions of the agency’s own experts and rejected the ban, claiming it was “returning to using sound science in decision-making.”

In California, where Latinx schoolchildren have been disproportionately exposed to heavy pesticide use, growers have continued to apply nearly a million pounds of chlorpyrifos each year. Despite the state’s reputation as the progressive leader of the resistance to Trump, local regulators continued to permit the chemical.

In response, Caps and other rural activist groups escalated their protests and testimony at government hearings, demanding California intervene.

“We spoke up. We shared our stories about the impact that chlorpyrifos was having on our health,” said Fidelia Morales, a 46-year-old mother in Lindsay, a farming town three hours north of Los Angeles.

Morales, who lives near citrus groves where chlorpyrifos use is common, said pesticide exposure has hurt her family, especially her 11-year-old son: “My son is not able to stay still and listen in school. I’ve had to sit with him in the classroom to help with his assignments.”

The mother of five moved to the area about 12 years ago, and quickly became concerned about pesticides drifting onto her property. “But I did not really know how dangerous the chemicals were.” She eventually learned of the troubling science.

“Once they make that connection, it’s really angering,” said Rivera, whose father was an activist with the United Farm Workers labor union. “It’s infuriating, because they are being told there is not an alternative, or the alternative is too expensive. How do you say that to somebody when it’s their child’s life?”

Central Valley residents traveled to the state capitol and testified about drifts causing vomiting and debilitating headaches, and their fears about long-term impacts on children.

“Mothers are always leading the way, and you don’t mess with a mom,” said Rivera.

When pesticides drift into homes, parents feel helpless and afraid, sometimes fearing their children won’t be able to breathe or won’t wake up the next morning, said Raul Garcia, a 22-year-old activist with CAPS, who previously worked in the dairy fields.

“The work is so hard, and the wages are so low, and our health is so poor,” he said. “People are working in the hot sun just to barely make it through, then at night they are worried about their children’s health, but they gotta be up again at 4 a.m. to go to work.”

When it came to chlorpyrifos, which had yielded so much damning research, activists worked hard to make it untenable for California to deflect any further, bringing up the difficult-to-pronounce chemical at town halls across the state.

“The public concern meant policymakers were being asked a lot of questions and were really unable to just ignore the science, or set the chemical aside,” said Gina Solomon, a former California Environmental Protection Agency deputy secretary and clinical professor of medicine.

Angel Garcia, chair of CAPS, said the chlorpyrifos campaign was effective because it united groups with a diverse range of interests, from immigrants’ rights, voting rights, labor activism, reproductive justice, and more: “If we’re going to be transformative, we’ve got to all come together.”

In May, the governor, Gavin Newsom, and the California EPA announced that they had listened to residents and that a ban was “needed to prevent the significant harm this pesticide causes children, farmworkers, and vulnerable communities.” The state cited recent findings of serious health effects at even lower exposure levels than previously understood.

Stunned activists celebrated the decision across the state.

“My children can be outside and play and be safe,” said Morales.

But there was a catch. The governor was not announcing an immediate ban, but rather the start of a “cancellation process” to introduce the restrictions in phases. It could take up to two years. There were also no guarantees about the safety of products that would replace it.

‘We’re not going to stop at chlorpyrifos’

The governor’s chlorpyrifos announcement said he also plans to invest $5.7 million in new funding to support the “transition to safer, more sustainable alternatives.”

Still, “communities are not yet at ease,” said Garcia. There is fear from some that the ban could make little difference.

“Will chlorpyrifos be replaced by something nearly as hazardous? Or will California really pivot to a more sophisticated plan for sustainable pest management?” said Paul Towers, executive director of the Community Alliance with Family Farmers, adding that the broader regulatory system needed to improve: “We can’t spend decades fighting each individual chemical.”

The state has promised to partner with growers to seek out practical alternatives that don’t rely on toxic chemicals, such as integrated pest management practices and biological controls.

Val Dolcini, acting director for the Department of Pesticide Regulation, said the state was not enacting an immediate ban so that it had time to prevent growers from switching to harmful products: “The department has made it clear to growers in California that they should begin to seek less harmful alternatives and less toxic pesticides.”

Corteva Agriscience, the chlorpyrifos manufacturer, has continued to defend its product, saying a ban would “remove an important tool for farmers and undermines the highly effective system for regulating pesticides that has been in place at the federal level and in the state of California for decades.” The company, previously part of agrochemical corporation DowDuPont, said it was “evaluating all options to challenge” the state’s restrictions and declined to comment further this month.

Morales said she was sick of the manufacturer’s defenses and wanted the company to know that residents would not back down: “Stop lying to the community.”

There are also regular reminders that the chlorpyrifos win is, by some measures, only a small victory. Angel Garcia said last week he was called to a local Tulare county vineyard where dozens of workers had suffered from a direct pesticide exposure from a nearby drift, some vomiting and others experiencing dizziness and headaches.

“They know this was wrong,” he said.

Raul Garcia said the ban on one chemical was only the beginning: “We’re not going to stop at chlorpyrifos. We’re just getting started.”