Obama slams climate deniers in State of the Union, and gets greens kind of excited 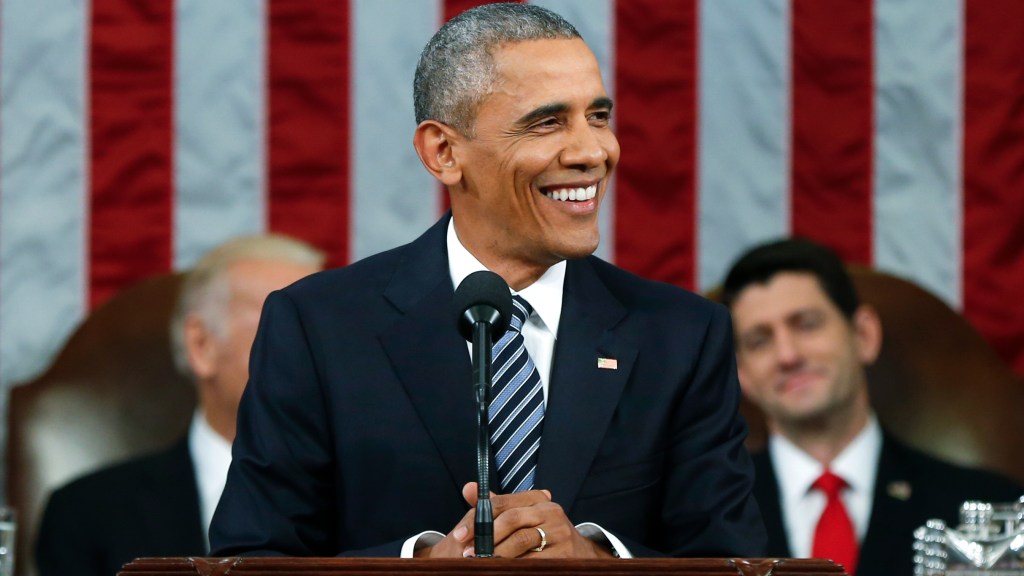 Obama slams climate deniers in State of the Union, and gets greens kind of excited

Climate change got several nods during President Obama’s final State of the Union address on Tuesday. The president — looking positively radiant as he gazed upon congress members who will soon be someone else’s problem — named it as one of the major challenges facing both the country and his successor. He also called out climate deniers, perhaps referring to the ones vying for his job.

“Look, if anybody still wants to dispute the science around climate change, have at it,” the president said to scattered laughter. “You’ll be pretty lonely, because you’ll be debating our military, most of America’s business leaders, the majority of the American people, almost the entire scientific community, and 200 nations around the world who agree it’s a problem and intend to solve it,” he said, regarding the Paris climate agreement.

“But even if the planet wasn’t at stake,” Obama continued, “even if 2014 wasn’t the warmest year on record — until 2015 turned out even hotter — why would we want to pass up the chance for American businesses to produce and sell the energy of the future?”

The president emphasized the importance of transitioning from dirty to clean energy. “Rather than subsidize the past,” he said, “we should invest in the future — especially in communities that rely on fossil fuels. That’s why I’m going to push to change the way we manage our oil and coal resources, so that they better reflect the costs they impose on taxpayers and our planet.”

That last line got three cheers from climate hawks. They’ve been pushing to stop the leasing of public land for coal, oil, and gas extraction, or at the very least to charge fair prices for those leases. Interior Secretary Sally Jewell said in March of last year that the administration would look at reforming the leasing program, so Obama’s comment didn’t indicate a new initiative, but activists were still pleased to have him emphasize it.

350.org Executive Director May Boeve said in a statement, “We welcome President Obama’s full-throated endorsement of clean energy and his pledge to take a close look at how we can get off fossil fuels. The President’s top priority during his last year in office needs to be keeping that coal, oil and gas in the ground. The issue of fossil fuel extraction on public lands is going to be a key fight over the coming months.”

On a less climate-friendly note, the president also used his speech to advocate for the Trans-Pacific Partnership, a trade deal that many environmentalists adamantly oppose. “You want to show our strength in this century?” the president said, speaking directly to Congress. “Approve this agreement.” Zero cheers from climate hawks — and silence from many Democrats, who object to the deal for a wide variety of reasons.

Later, the president mentioned the connection between climate change and global security. “The future we want,” he said, “is opportunity and security for our families; a rising standard of living and a sustainable, peaceful planet for our kids — all that is within our reach. But it will only happen if we work together.” At which point the RNC started burning barrels of coal on the White House lawn, GOP special guest Kim Davis began speaking in tongues, and John Boehner wept from the couch in front of his big-screen TV.