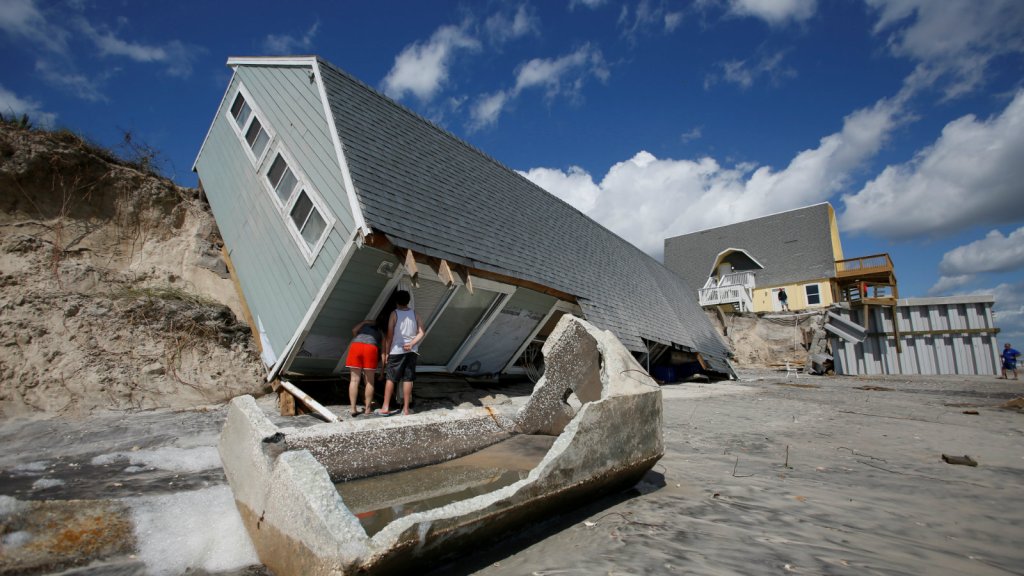 Back when Hurricane Irma was a Category-5 storm pounding Caribbean islands like Barbuda, Environmental Protection Agency Administrator Scott Pruitt hopped on the phone with CNN. The country was anticipating Irma’s landfall in Florida — which would follow less than two weeks after Hurricane Harvey inundated Houston — and CNN asked Pruitt if it was an appropriate moment to talk about the connection between climate change and hurricanes.

“To have any kind of focus on the cause and effect of the storm, versus helping people, or actually facing the effect of the storm, is misplaced,” Pruitt said. “To use time and effort to address it at this point is very, very insensitive to this [sic] people in Florida.”

Sure, you can argue that we should focus on the safety of our fellow man — even our Texan social media manager agrees. (Congressional Democrats are apparently on board, too.) Still, Harvey was the country’s worst deluge ever and Irma was the strongest hurricane ever to form in the Atlantic. And as a publication that’s focused on climate change, it’s hard for us to avoid seeing it as the culprit behind back-to-back hurricanes.

So we had two Grist scribes discuss whether it was a good idea for us to follow our instincts and shout “climate change is here” into the internet. Senior writer Nathanael Johnson had questions about how much of the destruction wrought by Harvey and Irma the science allows us to pin on global warming. And meteorologist-turned-journalist Eric Holthaus, a contributing writer at Grist, had answers.

An edited version of their conversation follows:

Nathanael Johnson: How much should we talk about climate change when reporting about disastrous storms like Harvey and Irma?

Eric Holthaus: Even though this is my beat, I have to admit I’m always a little unsure. I pump the brakes a bit: I want to make the link to climate change as forcefully as possible, but I absolutely don’t want to overstep the science. My working rule of thumb: Climate change increases the risk of damaging storms.

Asking if climate change “caused” Harvey or Irma — like one White House pool reporter did this week — is basically unanswerable. It’s like asking if a person’s alcoholism caused her to get into a particular car accident.

Nathanael: So how exactly does climate change relate to damaging storms?

Eric: First off, I think that’s an excellent way to phrase the question. Obviously if climate change is warming the atmosphere and increasing its capacity to hold water vapor, that’s going to relate to hurricanes somehow.

Nathanael: And it does, right? If it’s hotter, we’re going to get more water vapor, which I suppose could cause heavier rain?

Eric: Yep, the science is pretty clear here: For every degree Celsius (1.8 degrees Fahrenheit) that air warms, its capacity to hold water vapor increases by about 7 percent. That’s basic physics. It doesn’t mean it will hold that additional water vapor, but it can. And, often, especially in hurricanes, the air becomes 100 percent saturated with water vapor. If there’s more total water in a hurricane, it’s going to produce more rain.

Nathanael: So it sounds like climate change is most directly related to more water ending up in the wrong places during violent storms.

Eric: The clearest signals are that rising sea levels make coastal flooding worse and that the increasing intensity of heavy precipitation makes inland flooding worse. Coastal and inland flooding are the biggest killers resulting from hurricanes. These impacts are not trivial — even if the changes to sea levels and intense precipitation we’re seeing right now might not be as pronounced as they will be later in the century. This is what scientists mean when they say that the recent storms are harbingers of what’s to come.

Nathanael: When I think of hurricanes, I think of wind blowing down buildings. Is climate change likely to increase wind?

Eric: There is some evidence that, late this century, wind speeds themselves might increase. Or more exactly, the hurricanes that form are more likely to be stronger. We might have the same number of hurricanes, and some research suggests maybe slightly fewer total hurricanes. But those that do form will have a much better chance at developing into Category 4 or 5 storms. Both Harvey and Irma passed over ocean water that was much warmer than normal, which made it more likely that their intensity would strengthen. So even considering the uncertainties in the data and projections, it’s absolutely appropriate and critical to mention climate change as a factor in these storms.

Nathanael: So what question should journalists ask elected officials about climate change and natural disasters?

Eric: If there’s a best way to phrase a question on hurricanes and climate change to elected officials, it might be: “What efforts should we take to reduce the risk of hurricanes like these?” That sidesteps the chance that a climate change denier would just punt the question. It also goes to the heart of what we all want to know: “What’s it going to take to protect our society from extreme weather?”

Nathanael: That’s good. I saw a study suggesting that weather events don’t do anything to change the minds of climate skeptics. Is it useful to hammer this point during storms?

Eric: It’s irresponsible not to mention the quickly increasing number of people and amount of property in harm’s way. Whatever signal we’re seeing in storms is probably dwarfed by the sheer amount of destruction even relatively weak hurricanes can do these days because of society’s complete neglect of the risks. We’re making this problem much more damaging than it ever has been before.

Nathanael: So even if people don’t have a come-to-Jesus moment about the reality of climate change, they still have to come to grips with the fact that we are building in places that are going to flood?

Eric: Yep, these problems are related. The storms themselves are getting worse, but we’re also still building the same old way, which is putting more people and property at risk. Acknowledging and acting on climate change requires us to rethink almost everything, and in this case, it should give us a chance to imagine a world where heavier rain and rising seas are able to do their thing without us getting in the way. We know these effects are going to continue. It’s best for us to plan on rebuilding our cities with that in mind.