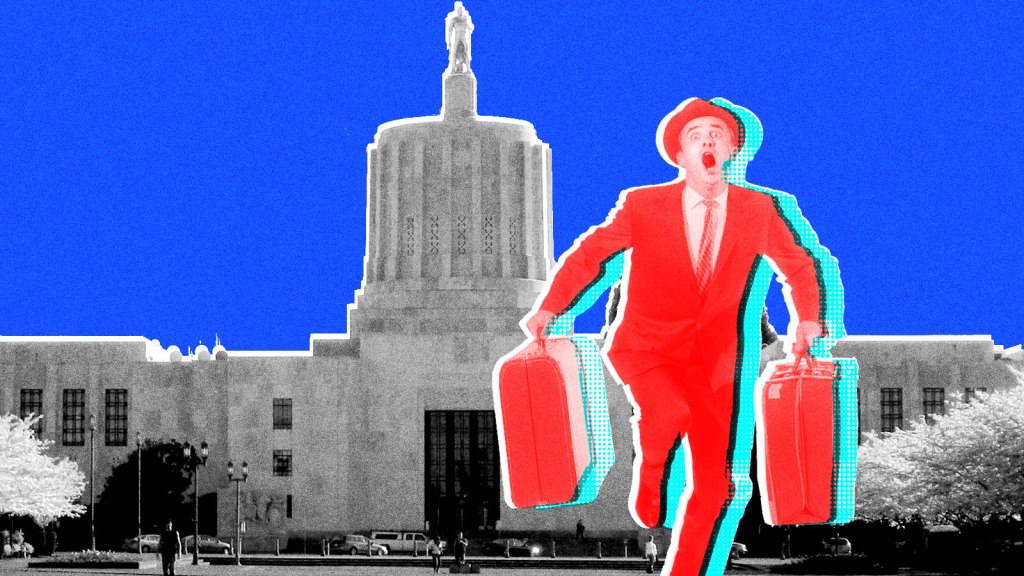 Oregon’s Senate Republicans have left the statehouse. No, they’re not on vacation. They’re in hiding. All 11 have fled to prevent a vote on a sweeping cap-and-trade proposal, which the state House approved earlier this week and the Senate was expected to approve on Thursday. In a madcap game of hide and seek, Governor Kate Brown, a Democrat, ordered the state police to bring them back to Salem.

If approved, the bill would make Oregon the second state in the country with a cap-and-trade program. But the Senate needs to round up some of the missing senators to be able to hold a vote, and that might take a bit.

“I do not believe the state police will be able to find any of our members,” Tim Knopp, a Republican state senator, told Oregon Public Broadcasting as the Republicans reportedly scattered across several states on Thursday morning.

Brian Boquist, another Senate Republican, suggested on Wednesday that he might shoot any trooper sent to bring him back. “Send bachelors and come heavily armed,” he said. “I’m not going to be a political prisoner in the state of Oregon.”

A militia group called Oregon III% “vowed to provide security, transportation and refuge for those Senators in need” in a Facebook post. “We will stand together with unwavering resolve, doing whatever it takes to keep these Senators safe.”

The thing is, only two of the missing senators need to return to Salem to make a quorum: The Oregon Senate needs 20 of its 30 members present to hold a vote. Senate Democrats are promising to fine the lawmakers $500 for each day they’re absent. If they don’t come back by the end of the legislative session on June 30, Governor Brown said she would hold a special session to vote on the legislation. “Oregon can be the log that breaks the jam nationally” on climate policy, she said in a statement.

The “Clean Energy Jobs Bill” would place a cap on greenhouse gas emissions and lower it over time, and also auction off a limited number of pollution permits for companies to buy and trade. The idea is to incentivize big polluters to switch to greener technology.

The plan aims to reduce Oregon’s emissions to 80 percent below 1990 levels by 2050. It would raise an estimated $550 million in its first year, most of which would fund investments in renewables and emissions cuts, prioritizing projects in low-income communities, tribal lands, and communities of color.

An analysis by economists at the University of California at Berkeley shows it could create 50,000 jobs by 2050. But Republicans say the proposal could threaten rural communities by raising prices and sending jobs to other states. One state senator who’s been working on negotiations said he’d like to redirect money away from “social justice programs” and not charge manufacturers for carbon emissions if they’re using some greener technology.

It’s the second time Republican state senators have walked out this year. In May, they avoided Salem for four days to avoid a vote on a business tax to raise money for Oregon schools. The bill passed, but as part of the compromise, Republicans were told they could have a say in the cap-and-trade bill as long as they didn’t walk out again this session. Republicans say that Democrats didn’t keep their word, so they’re on the run again.