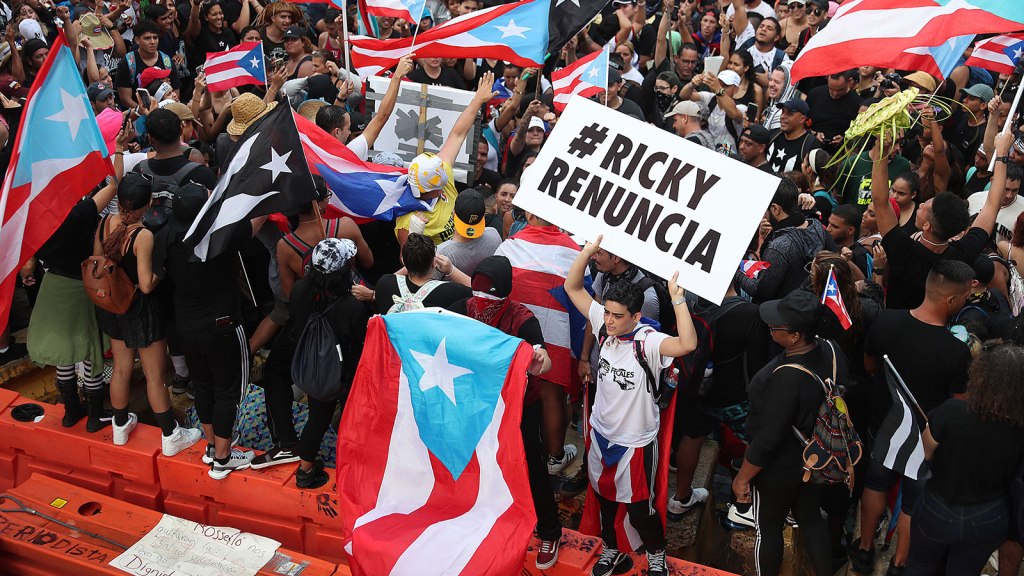 Calls for the resignation of Puerto Rico’s governor, Ricardo Rosselló, echoed through the streets, flooded social media, and even fell from the sky following last week’s leak of nearly 900 pages of profanity-laced messages Rosselló exchanged with his inner circle via the encrypted messaging app Telegram.

Far from fizzling out, anti-Rosselló demonstrations have only been growing in the past few days; on Monday, approximately a million protesters hit the streets for the biggest demonstration yet. Many participants voiced outrage over offensive language Rosselló in his private chats, accusing him and his administration of corruption, misogyny, homophobia, and just overall insensitivity.

But perhaps the most painful revelation was the apparent callousness with which Rosselló’s administration described the victims of Hurricane Maria, which devastated the island in September 2017 and caused at least 3,000 deaths. In the chats, Rosselló and his inner circle made light of dead bodies piling up in morgues after the storm — one of the deadliest natural disasters in U.S. history.

The scandal — dubbed “Chatgate” — comes after a series of arrests by the Federal Bureau of Investigation of top Puerto Rican officials on charges of corruption related to the alleged embezzlement of $15.5 million in federal funding between 2017 and 2019. President Trump used both scandals to criticize Congress for allocating funds toward a disaster relief plan for the island. Trump has repeatedly hammered Puerto Rican officials for their mishandling of the island’s finances both before and after Hurricane Maria.

“The unfortunate events of the past week in Puerto Rico prove the president’s concerns about mismanagement, politicization, and corruption have been valid,” White House spokesman Judd Deere said in a statement, according to the New York Times. “We remain committed to Puerto Rico’s recovery and steadfast in protecting taxpayers and the Puerto Rico survivors from political corruption and financial abuse.”

Since Hurricane Maria walloped the island two years ago, it has received only a fraction of the billions it’s been promised ($14 billion versus $42 billion) to rebuild after the hurricane. President Trump falsely claimed the territory has received $92 billion in “squandered” aid. In fact, aid has been slow to reach the island for a number of reasons, including Trump delaying one disaster relief bill for months. But as the leaked messages suggest, at least some of the blame may also rest with Rosselló’s administration for failing to properly address the disaster.

Since the leak, members of the governor’s administration, including Secretary of State Luis Rivera Marín, have been falling like dominoes. But Rosselló has yet to budge. Instead of resigning, Rosselló announced Sunday night that he would step down from his role as the head of his political party and will not seek reelection after his first term ends next year.

“A huge portion of the population is unhappy and I recognize it,” Rosselló said in a Facebook Live video. “Apologizing is not sufficient, and only my work will help restore the trust of these sectors and embark on a real reconciliation.”

For many Puerto Ricans, though, Rosselló’s words were too little too late. “Governor Ricardo Rosselló has made further mockery of the Puerto Rican people by refusing to leave office,” said Power 4 Puerto Rico, a coalition formed after Hurricane Maria to advocate for displaced families, in an emailed statement on Monday. “As worldwide demonstrations calling for the governor to step down continue, the Legislature of Puerto Rico must now commence an impeachment process based on the ample evidence corroborated by many jurists of Rosselló breaking the law.”

Even before the hurricane’s onslaught, Puerto Rico was facing a dire economic reality. The island is in the midst of a 13-year recession that has seen residents leave the island in huge numbers, and the government declared bankruptcy in 2017.

Grist contacted La Fortaleza, the governor’s official residence in San Juan, for comment but did not hear back at the time of publication.