More than a week has passed since Hurricane Maria made landfall on Puerto Rico, and still little word has come from remote parts of the island — like the southeast, for example, where many residents of African descent, as well as industrial sites, are concentrated.

Puerto Ricans living outside the island are struggling to reach friends and family members. And from Grist and others’ reporting, the situation on the ground is looking grim. Conservative estimates by NASA show that Maria, which hit the U.S. territory as a Category 4 storm, dropped nearly two feet of water on Puerto Rico in a single day. That’s the amount of rainfall so-called dreary London gets in a year.

Maria has left many Puerto Ricans without electricity, food, and shelter. And these new hardships layer on top of others the island was already struggling with. Roughly 40 percent of Puerto Rico’s population lives below the poverty line. That’s 1.5 million impoverished residents — more people than live in the entire state of Maine. Then of course, there’s the island’s $70-billion debt crisis.

Environmental problems also abounded in Puerto Rico, including perpetual threats to drinking water and overflowing landfills. Experts tell Grist that this disaster is sure to make the island’s many environmental injustices even worse.

The drinking water is sketchy

“Puerto Rico is one of the most significant environmental justice concerns in the U.S.,” says NRDC law fellow Mekela Panditharatne, one of the report’s authors. “The water will be an island-wide issue.”

Most of the infractions stemmed from officials failing to conduct water quality tests and report problems. But nearly 67 percent of the population’s water systems suffer from high levels of coliform bacteria that can cause infection and volatile organic compounds, some of which are carcinogenic. Low-income areas with smaller water systems, like private wells, are especially at risk. The Safe Drinking Water Act doesn’t regulate setups that serve fewer than 25 individuals.

Flooding poses an even greater threat to the island’s coal ash waste sites. Puerto Rico has nearly nearly 40 toxic dumps, most of them dotting the natural landscape along the island’s picturesque southeastern coast. This byproduct of burning coal for energy is full of dangerous metals, like lead and arsenic. And when ash mixes with water and soil, it boosts their concentration of those toxic elements, making them much less safe. 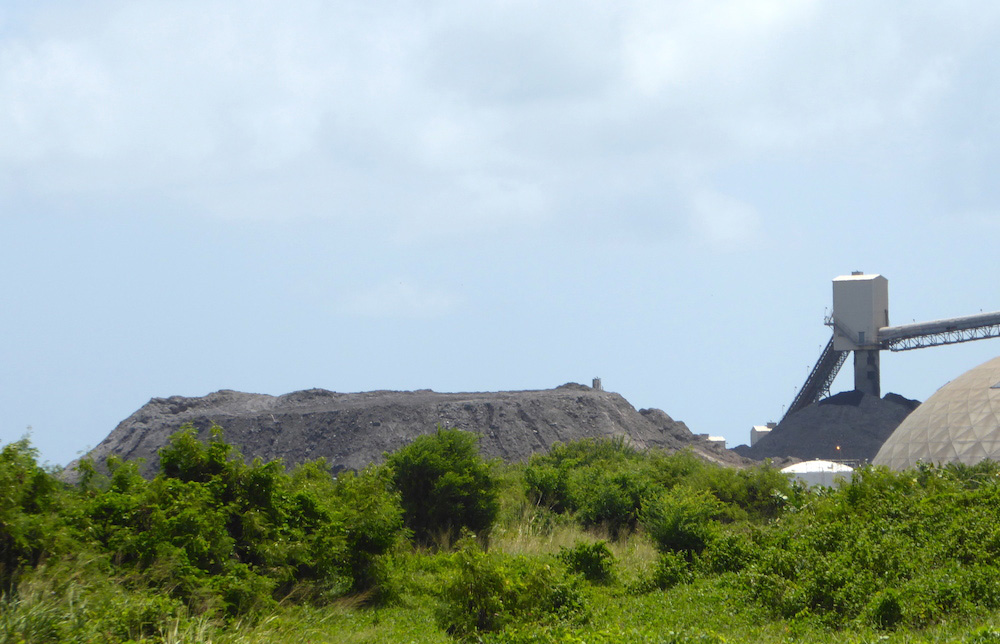 A five-story pile of coal ash sites next to a power plant in the southern town of Guayama. Courtesy of Hilda Lloréns

Water and soil contamination is a huge concern surrounding a five-story pile of coal ash in Guayama. We still don’t know for certain if Maria blew it away, washed it away, or miraculously spared it. The waste comes from a coal-fired plant run by the multinational corporation Applied Energy Systems. And according to a 2016 analysis paid for by the U.S. Environmental Protection Agency, it contains levels of heavy metals that may “exceed up to 9,000 times federal safety standards upon contact with liquids and soil.”

Hilda Lloréns grew up in Guayama. Now she’s a professor of anthropology at the University of Rhode Island who researches environmental racism. She’s worried about the risks the coal ash poses to her hometown. If Maria disrupted the massive coal-ash pile, toxins may have leached into the ground and surrounding waterways, increasing risks to residents’ drinking water.

While she’s awaiting official reports, Lloréns is wondering what steps the Puerto Rican government could take to manage the ash. “How do you cover a mountain?” she asks, adding that both federal and local officials have a habit of ignoring the needs of those in the southeast of the island.

Overflowing landfills are going to take in more garbage

The EPA reported in 2016 that most of Puerto Rico’s 29 landfills are “beyond capacity.” The federal agency has been attempting to address the problem since 2002, but little has improved.

To make matters worse, these landfills have become toxic sites after companies began dumping coal ash in them. Governor Ricardo Rosselló signed a law in July to prohibit this practice, but according to Lloréns, that hasn’t stopped ash from ending up in landfills.

Even without the addition of coal ash, the landfills themselves pose environmental and health risks because of wastewater runoff, as well as liquid that forms during the decomposition process. Both can end up in drinking water.

It’s an already precarious situation that Lloréns believes has no hope of improving post-Maria. “Given the amount of debris from the storm,” she says, “that can only deteriorate.”

Puerto Ricans, in general, consume much more electricity compared to their Caribbean peers. Take a look at nighttime satellite images of the region; Puerto Rico shines brightly amid a sea of darkness.

Puerto Rico powers its electrical grid through imported fossil fuels, even though it has ample sun, wind, and water at its disposal. Currently, only 2 percent of its energy comes from renewables. This reliance on fossil fuels isn’t sustainable, and it has uneven impacts on the islanders. Many of the territory’s largest fossil fuel power plants are located on its southern coast, posing air and pollution risks to the people nearby, who also tend to be poor.

But in this case, the destruction wrought by Maria offers an opportunity. De Onís says energy justice will become increasingly important during the island’s recovery effort and that it should step away from its dependence on huge power plants. She sees this as an opportunity to recreate the island’s decimated energy grid as one that takes advantage of its bountiful renewable energy resources.

Energy experts say that a move like the one de Onís suggests could better protect Puerto Rico from future power outages. She adds that, in addition, she’d like to see communities take back their energy system and transform it from one that is slowly polluting their waters, harming their health, and stripping their island of its wild essence into one that puts people first.

This community control over how energy is generated would create, de Onís explains, “a much more decentralized model that speaks to having those most impacted by these decisions not only at the table but making the decisions themselves — a radical change from what is currently the case.”

Given the scale of the disaster unfolding on the island, radical changes on multiple fronts could be the key to rebuilding a more sustainable Puerto Rico.

Puerto Ricans are living climate change right now. Here’s how they describe it.