Want to see something terrifying? Watch atmospheric carbon emissions climb to the new all-time high of 415 parts per million.

We've updated our animation of the Keeling Curve to reflect 2019 readings. pic.twitter.com/jFWJf8gQEZ

This emissions update comes from daily data collected via analyzer at Mauna Loa Observatory, Hawaii, since 1956. After breaking the 400 ppm threshold in 2013, data from 2019 puts emissions at 415 ppm. The “upward trajectory continues,” the video ends on an ominous note.

Who could have seen this coming? As Brian Kahn at Earther pointed out, leaked internal documents from Exxon Mobil reveal that the oil and gas giant has seen this emissions landmark coming since 1982. A graph shows their 2019 estimated carbon dioxide level was between about 385 ppm and 415 ppm, an impressively accurate guess for the time. 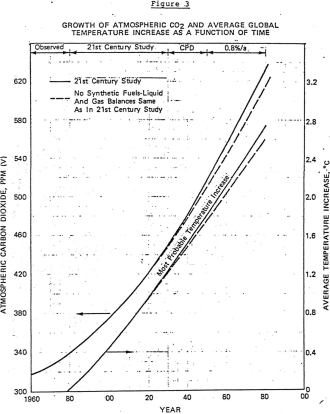 Instead of using this knowledge to prevent it from becoming a reality, Exxon launched a series of climate denial efforts. It published anti-climate change ads in The New York Times, lobbied against government efforts to regulate emissions, and helped start the Global Climate Coalition to cast doubt on climate change.

After decades pushing climate denial, oil and gas companies are starting to face the consequences. Countless lawsuits are cropping up from states, cities, tribes, and fishermen that call for oil companies to finally own up to the self-serving role they’ve played in exacerbating the climate crisis.