How can we end our love affair with sport utility vehicles?

Sure, I get it: They carry more people than sedans, and they look cooler than minivans. But consider the facts. A new analysis from the International Energy Agency shows that there are 35 million more SUVs on the road today than in 2010. The number of electric vehicles increased by just 5 million in the same time period. The result: The business of driving humans around is guzzling more gas. So, while greenhouse gas pollution from regular passenger vehicles actually declined since 2010, emissions from SUVs and trucks have increased enough to wipe out those gains, and then some. SUVs, counted alone, are now warming our planet more than heavy industry. 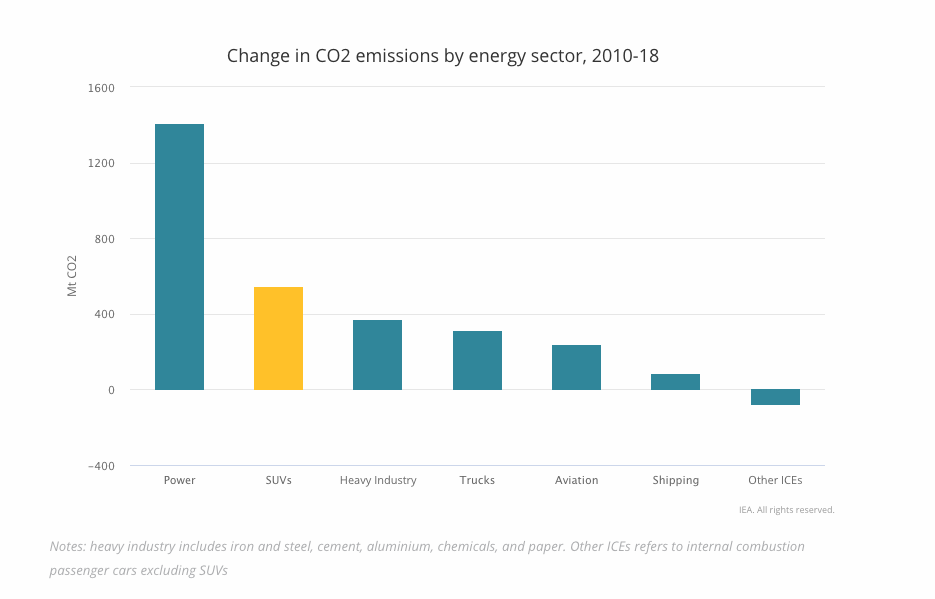 These gas guzzlers could single-handedly eliminate the possibility that the world achieves the climate goals set in Paris in 2016 by insuring that transportation emissions continue to swell. The new IEA analysis concludes: “If consumers’ appetite for SUVs continues to grow at a similar pace seen in the last decade, SUVs would add nearly 2 million barrels a day in global oil demand by 2040, offsetting the savings from nearly 150 million electric cars.”

If you aren’t motivated by the long-term threat of climate change, perhaps you may learn to dislike SUVs if they threaten to kill you. As Kate Yoder pointed out, every one of these vehicles that goes on the road makes the world more dangerous for everyone but the people in them. Pedestrian deaths have reached the highest levels in decades, thanks largely to the influx of bigger vehicles packing heavier punches.

So more deaths and more emissions. We got a preview of this trend in recent numbers coming out of California, where SUVs are also threatening to leave state climate goals broken and bleeding into the gutter.

The fact that beefy vehicles make their drivers a little safer, while endangering everyone around them is a hint as to why it’s been so hard to end our toxic relationship with SUVs. The people making the choice reap the benefits, while everyone else bears the cost. That’s the larger problem popping up here, in the form of surging SUV sales. It’s the problem that runs, and ruins, the world.