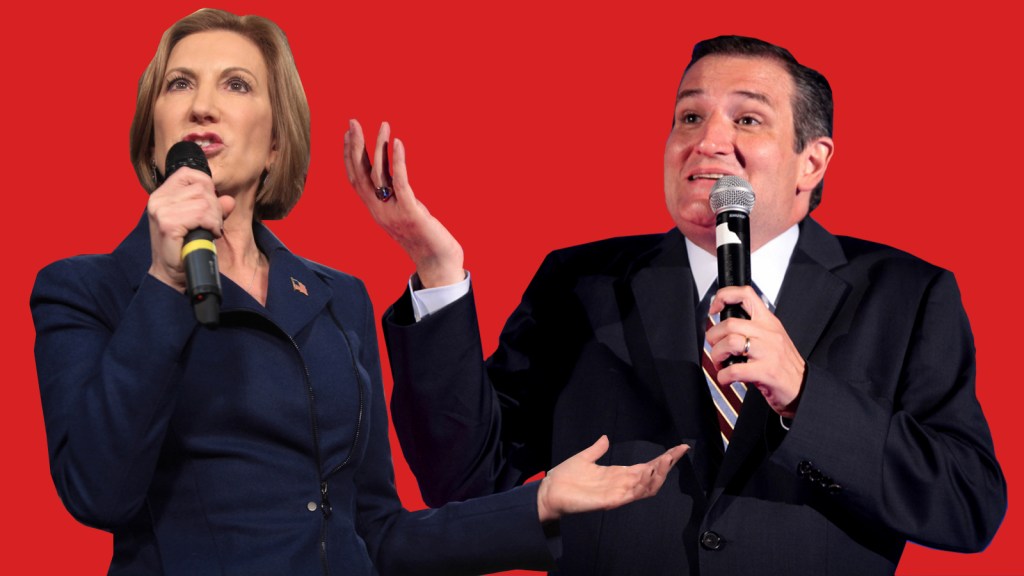 Hello! Welcome to what should really be a regular installment here at Grist, Shit Republicans Running For President Say. Today, we have a double feature for you: Ted “I Swear I’m Not Canadian” Cruz and Carly “The Only Thing I’ve Ever Run Is A Business Into the Ground” Fiorina. Let’s start with Cruz.

CNN reports that at a question-and-answer session in Iowa on Monday, a concerned voter asked about “making contraception available to women who want to control their own bodies.” Instead of answering the question, Cruz, naturally, used the opportunity to attack Hillary Clinton.

“Hillary Clinton embraces abortion on demand in all circumstances up until the moment of birth,” Cruz said, making abortion sound like it’s available from your cable TV provider. “Partial-birth abortion with taxpayer funding, with no notification for parents in any circumstances — 91 percent of Americans say that’s nuts.”

Let’s take a brief moment to fact check this claim, shall we? Magic Eight Google, Does Hillary Clinton embraces abortion on demand in all circumstances up until the moment of birth?

Magic Eight Google says … FALSE. As Clinton said in a 2015 interview with MSNBC, she is actually open to a constitutional restriction on late-term abortions if they take the life and health of the mother into account. She also said in 1997, “I believe in parental notification. I think there are exceptions. There are situations in which the family is so dysfunctional that notification is not appropriate. In general, I think families should be part of helping their children through this.”

Granted, Clinton’s thinking on the issue may have (hopefully) evolved since 1997, but since Cruz doesn’t believe in evolution anyway, let’s take her prior statement at face value. And as to where Cruz found the statistic that “91 percent of Americans say that’s nuts”? Pretty sure he pulled it out of his ass since the data does not back it up.

In Iowa, the Texas Senator continued in this vein, alleging that the perceived war on women’s reproductive health does not exist. Why? Because condoms! “Last I checked, we don’t have a rubber shortage in America. When I was in college we had a machine in the bathroom, you put 50 cents in and voila! So yes, anyone who wants contraceptives can access them.”

Uh huh. Because everyone knows that forcing women to rely on men for sexual and reproductive health has been so successful in the past. And men love to wear condoms. Problem solved! Thanks for that, Teddy.

Moving on, Carly Fiorina dismissed claims by President Obama and the Democratic front-runners that climate change is a major threat to global security. “It is delusional for President Obama and Hillary Clinton and anyone else to say that climate change is our near-term most severe security threat,” Fiorina said on Fox News Sunday. “It is ISIS, period, followed closely by Iran and perhaps Russia.”

Okaaaay. Assuming Fiorina meant ISIS and not ices — and do not kid yourself, black ice is no joke this time of year — she is just plain wrong, according to actual experts. ISIS has “a limited ability to kill civilians in dramatic and destabilizing ways, which in turn forces us to spend inordinate amounts of money and effort on security,” Lance Janda, a military historian at Cameron University, told Politifact. “But they cannot destroy us, or invade, or wreck our economy, or threaten our fleets or armies or air forces in the same way that conventional enemy forces might.”

Or, for that matter, climate change might. “Climate change will affect the Department of Defense’s ability to defend the nation and poses immediate risks to U.S. national security,” read a 2014 report from the Pentagon. And a year earlier — when Carly Fiorina was just a failed business exec and not a failing presidential candidate — naval commander Samuel J. Locklear III told the Boston Globe that the greatest threat to security in the Pacific isn’t terrorism or foreign nations at all: It’s climate change.

Take note, Fiorina: Considering that the bar for the GOP nomination is so low, even a person with a vagina and no political experience could win this thing if you’d stop making ludicrous statements every time a camera points your way. So take some time, google “climate change and national security,” and do your research. There could still be hope for you. Maybe.