Frank Luntz’s up-close encounter with our increasingly wild weather came at 3:15 a.m. one morning, when the GOP master messenger woke up to his phone blaring an emergency evacuation warning. Luntz saw flames outside his bedroom window. The famous pollster’s home in Los Angeles was in the path of the Skirball Fire, one of the many wildfires that destroyed parts of Southern California in December 2017.

Luntz, whose advice helped Republicans hold power for years and also keep their heads in the sand when it comes to climate change, cited the fire as an example of the climate crisis made personal. He’s the same political consultant who convinced conservatives to rebrand the “estate tax” as the “death tax.” He crafted talking points for the Koch brothers and reportedly convinced the Trump administration to talk about “border security” to drum up support for building a border wall.

But the reality of climate change is increasingly too hard to ignore. “The courageous firefighters of L.A., they saved my home, but others aren’t so lucky,” he said as he recounted the tale during a Senate testimony on Thursday. “Rising sea levels, melting ice caps, tornadoes, and hurricanes more ferocious than ever. It is happening.”

Luntz was one of three Republicans invited by Senator Brian Schatz, a Democrat from Hawaii, to speak to the Special Committee on the Climate Crisis about breaking down partisan barriers and taking action on climate change. “Elected Republicans are mostly awful on climate, but it wasn’t always that way, and it doesn’t have to be that way in the future,” Schatz said in a press release before the hearing, “The Right Thing To Do: Conservatives for Climate Action.”

The hearing came amid signs that Republican voters are increasingly out of step with their elected representatives on climate change. In parts of the country hit hardest by extreme weather, like Florida, Republicans are already changing their tune on environmental policy. According to a survey from the Yale Program on Climate Change Communication last year, 52 percent of Republicans said if there’s a conflict between environmental protection and economic growth, the environment should come first.

Luntz played a role in turning the environment into a partisan battlefield. During President George W. Bush’s first term, his infamous memo warned Republican party leaders that they were losing “the environmental communications battle,” an issue on which Bush was “most vulnerable.” He advised them to emphasize a lack of scientific certainty around climate change and drop “global warming” for the less scary-sounding “climate change.”

Luntz is now offering his messaging services to the cause of climate action. “I’m here before you to say that I was wrong in 2001,” Luntz told the Senate committee. “Just stop using something that I wrote 18 years ago, because it’s not accurate today.”

“That was a lifetime ago,” he said. “I’ve changed.” He promised to help the Democrats on the climate committee, provided that they put “policies ahead of politics” and commit to nonpartisan solutions. 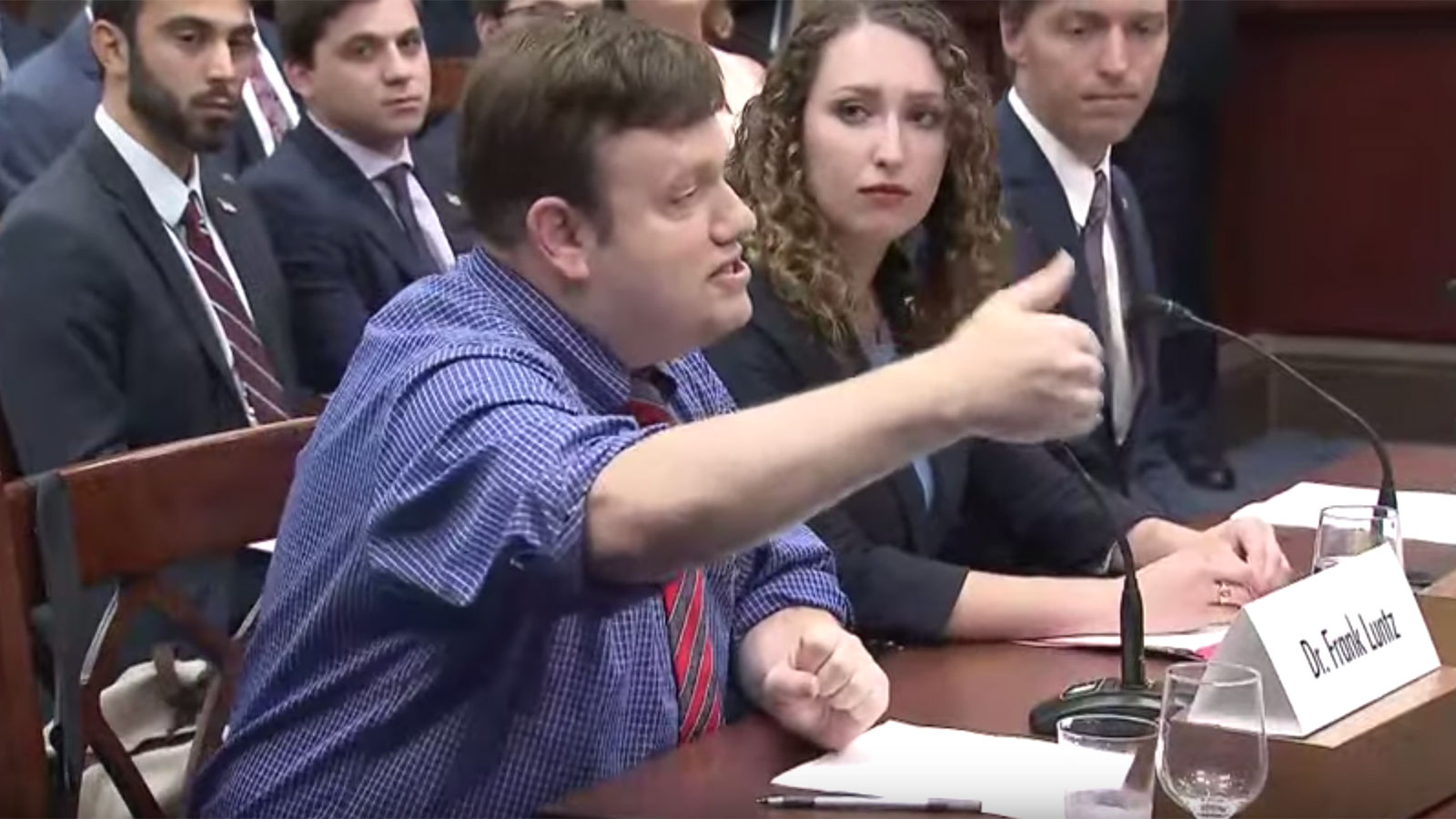 It’s not the first time Luntz has taken up the cause of the environment. Back in 2010, he teamed up with the Environmental Defense Fund and laid out advice to persuade Americans take up the cause of clean energy. But that’s not to say he’s a fan of environmentalists, who he’s called “some of the most personally nasty people” and “mean.”

Luntz came to the hearing prepared to share advice for people pushing for action on the climate crisis. He offered a chart of “words to use and words to lose” based on what he’s learned from focus groups:

Another suggestion: Drop “sustainability,” because it rings of the “status quo,” he explained. “What American people really want is something that is cleaner, safer, healthier. What they’re asking for is improvement, not the status quo.”

It’s also important to frame climate action as a “no-regrets strategy,” Luntz said. Legislation would lead to cleaner air, cleaner water, less dependence on foreign fuels, enhanced national security, and more innovation in our economy. “And that’s if the scientists are wrong,” he said. “If the scientists are right, we get all of those things and begin to solve what could be the most catastrophic environmental problem that any of us have ever faced … That’s why it’s the right thing to do.”

Stay away from the complicated science of climate change and personalize the message instead, Luntz advised. “How many of you know of someone who either lost a house because of a hurricane, a tornado, a forest fire?” he turned to ask the audience at the hearing. Many raised their hands.