In a modest sign of Americans’ escalating interest in global warming, several 2020 Democratic presidential contenders have been talking a fairly decent climate policy game. Thanks to the push for a Green New Deal, candidates are throwing around phrases like “decarbonizing the economy.” Spiritual healer Marianne Williamson talked about climate injustice on national television, and Maryland Representative John Delaney busted out direct air capture during the second round of debates.

But as was apparent in the special report released by the U.N. Intergovernmental Panel on Climate Change last week, it’s going to take a lot more than a “net-zero emissions” approach to avert the global climate crisis already in progress. We need to talk about better land management.

Land use policy does not make for particularly sexy political fodder, but climate scientists say it has to be a part of any comprehensive climate mitigation strategy. The report details the devastating toll that human activity is taking on our land — which is warming twice as fast as the rest of the Earth — including soil erosion, wildfires, and desertification. The 1,400-page report has a lot of information, but the important point is this: There’s a finite amount of land that humans will need to use very cleverly if we’re going to produce enough food and fuel for a growing population on a fast-warming planet, and right now we’re not on track to make that happen.

Weirdly enough, agricultural reform has come up, at least briefly, among the presidential candidates. During the second Democratic debates, Texas Congressman Beto O’Rourke gave a shout-out to regenerative agriculture. Ohio Representative Tim Ryan advocated for soil sequestration. “You cannot get there on climate unless we talk about agriculture,” he said.

And, yeah, he’s right. Depending on how it’s used, land can either combat climate change (by sequestering carbon in soil and plants) or contribute to climate change (unsustainable farming and chopping down forests release greenhouse gases, after all). According to the report, we need to fundamentally change the way we produce food and manage our land, and fast, using every tool in the book: eating less meat, supporting local food systems, and conserving valuable ecosystems, to name a few.

But spending a few minutes slinging a few land-use buzzwords during a political back-and-forth is not the same thing as aligning your platform with IPCC guidelines. So we decided to ask, who’s got a plan for that? This summer, I, Grist intern extraordinaire, took it upon myself to scour every single candidate’s campaign website and Twitter feed, along with their responses to news outlets’ surveys, for their positions on various environmental issues. Then I dumped them in a big ol’ spreadsheet I titled “someone, please, drop out.”

So what did I find? I’ll spare you the details for each of the 20-plus candidates, but here are the highlights: In addition to their distinctive climate plans, senators Elizabeth Warren (Massachusetts), Kirsten Gillibrand (New York), and Amy Klobuchar (Minnesota), along with former Vice President Joe Biden, all have rural policy proposals with some climate components. Vermont Senator Bernie Sanders hasn’t released a climate-specific policy plan yet, but his rural plan devotes an entire section to empowering farmers, foresters, and ranchers to address the climate crisis. These candidates’ proposals address a wide range of rural problems, from education to infrastructure, but they also put forth some land-related changes that sound straight out of the IPCC report.

All of these contenders say they would significantly increase funding to existing government programs that pay farmers to transition to sustainable methods and help conserve, or at least better manage, land that’s especially important and fragile, like wetlands. The specifics of how much more money would go to these programs varies candidate by candidate. Only Warren has the numbers — she wants to increase funding for the Conservation Stewardship Program, which pays farmers to use sustainable farming practices, by fifteenfold. 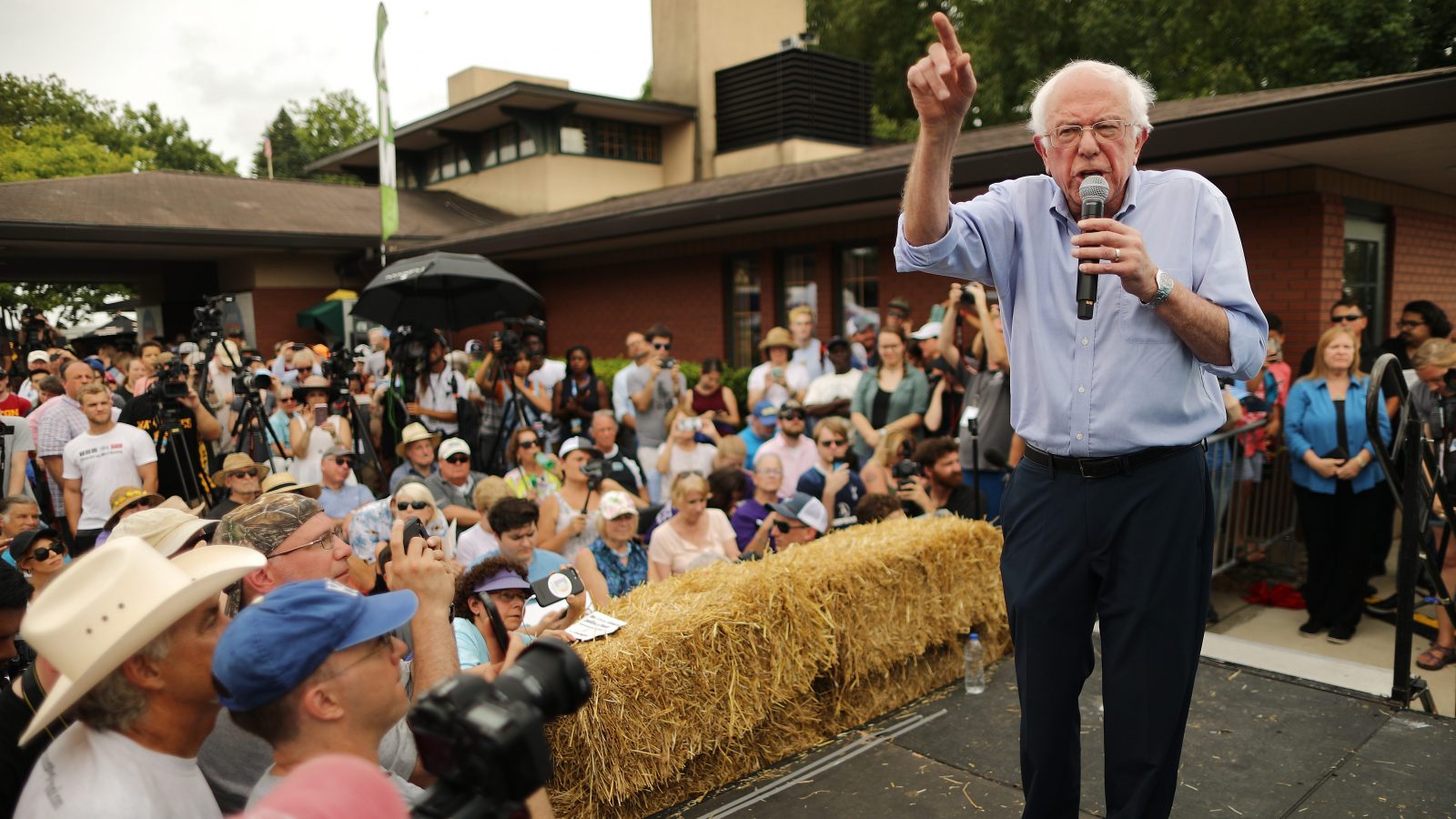 Of course, policy plans aren’t the only way for candidates to show voters where they stand on environmental issues. New Jersey Senator Cory Booker hasn’t released a land management “plan” as part of his campaign platform, but he plans to introduce relevant legislation in the Senate next month. The Climate Stewardship Act, announced last Thursday, takes a “nature-based” approach to fighting the climate crisis by committing the government to planting 9.5 billion trees on federal land by 2050, providing grants for wetland restoration, creating a “Civilian Conservation Corps” to train and employ young people to do conservation projects, and investing $25 million a year in urban farms and community gardens in low-income areas.

And as for those federal programs his peers support, the ones that pay farmers to adopt sustainable practices and conserve their land? Booker’s bill would approximately double funding to each of them and increase funds for the Conservation Stewardship Program to 10 times its current budget.

Warren, Klobuchar, and Biden have proposed strengthening antitrust enforcement to break up industrial agribusinesses, which are responsible for some of the most environmentally harmful farming practices, including air- and water-polluting pesticides. Booker’s Climate Stewardship Act does not discuss antitrust. (After this story published, a spokesperson for Booker’s office reached out and noted that the senator reintroduced a bill earlier this year to place a moratorium on acquisitions and mergers in Big Ag.) Gillibrand’s “Rebuilding Rural America For Our Future” plan proposes passing the Farmers Bill of Rights, which calls for “strong anti-trust safeguards.”*

Warren, as usual, has a particularly fleshed-out plan for “A New Farm Economy.” She’d commit federal institutions to buying local food, sending billions of dollars to support regional farmers. She also calls for a “fair price” system, where the government would guarantee farmers a certain price for commodity crops to cover the cost of production. The practice would, in theory, regulate the market by storing surpluses of food that could be taken out in bad years, bringing stability to the food supply for farmers and consumers alike. (Sanders has also proposed a similar pricing model, as well as building infrastructure to support regional processing and distribution.)

O’Rourke and Washington Governor Jay Inslee don’t have rural policies, but they do have climate policies that mention agricultural and land management (you see why I made a spreadsheet to keep track of all this). Inslee plans to invest in R&D for farming methods and technologies aimed at sequestering carbon in the soil, in addition to increasing bioenergy production on farms. O’Rourke would direct more funding toward paying farmers to adopt sustainable practices. Still, both of their land management proposals are pretty sparse compared to the specificity in the plans from Biden, Sanders, and Warren.

As for some of the other candidates you’ve been hearing about? Mayor Pete Buttigieg of South Bend, Indiana, and Ohio Representative Tim Ryan both mentioned the important role agriculture has to play in dealing with the climate crisis during the June debates, but neither candidate has released a comprehensive policy plan on the topic — in fact, Buttigieg’s rural plan doesn’t even mention farms or the climate. California Senator Kamala Harris hasn’t shared ag or climate proposals except for a vague position statement on her website. (To be fair, she did unveil a plan to introduce environmental justice legislation with Representative Alexandria Ocasio-Cortez — their plan would evaluate government projects’ impact on low-income communities).

Rural policy proposals may feel like distant concerns to some. But if this latest IPCC report tells us anything, it’s that reforming agriculture and land use policy is one of the most effective ways our next president could take on the climate crisis. And seeing as we’re all on this rapidly heating planet together, we may all need to be asking “How are you going to reform our food system and manage land?” as often as we ask about fossil fuel subsidies or solar panels.

*Correction: An earlier version of this story said that Gillibrand’s plan did not discuss anti-trust.

In Detroit, Democratic candidates actually did some climate debating