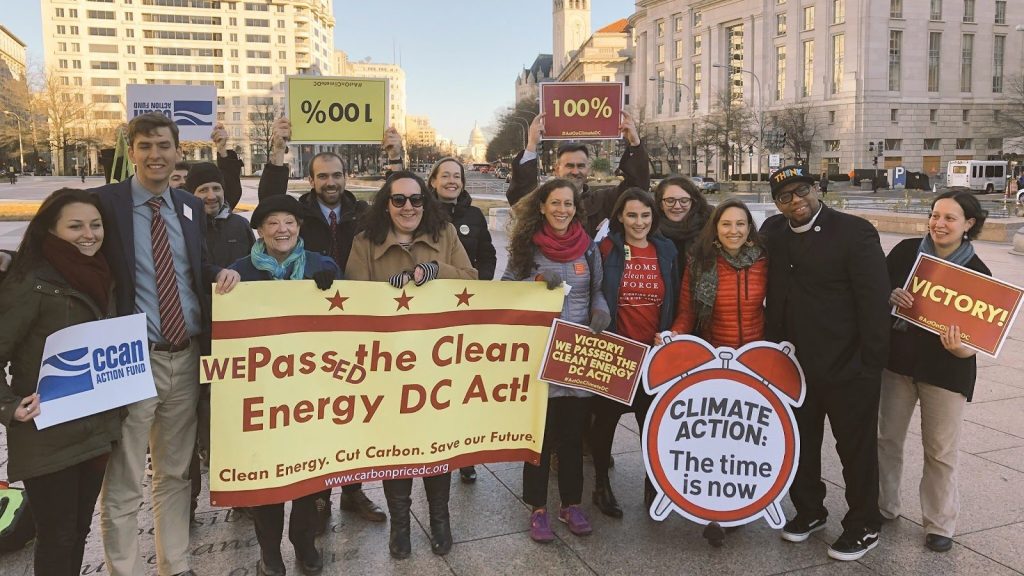 Rev. Lennox Yearwood, Jr. is the president and CEO of the Hip Hop Caucus Education Fund. He is a minister, community activist, and organizer, and one of the most influential people in hip hop political life. Find out more about the Hip Hop Caucus and follow him on Twitter @RevYearwood.

On June 1, 2017, President Trump announced that the United States would withdraw from the Paris Climate Agreement, and we became one of only two countries (along with Syria) not signed onto the accord. Four days later, on June 5, I stood next to Washington, D.C., Mayor Muriel Bowser, a powerful, forward-thinking women of color, as she signed an executive order commiting the District of Columbia to the very climate agreement from which President Trump withdrew. In doing so, she became part of a movement in communities and cities across this country saying “we are still in” to the Paris Agreement, a movement that has become the answer to U.S. action on climate change.

It took time, but driven by committed local government officials, forward-thinking utility companies, and a coalition of local activists and community organizations, Washington, D.C., kept its word. In December, the D.C. city council passed the boldest piece of local climate legislation in the country. And on Friday, Mayor Muriel Bowser signed the Clean Energy D.C. Act to transition the district to 100 percent clean energy — including the White House and halls of Congress — by 2032.

The bill is a powerful example of the climate leadership we need. D.C. is the largest city to make such an ambitious commitment. Just as remarkable, it supports opportunities for low-income communities in the transition.

The Clean Energy D.C. Act sets renewable energy standards for utility companies, improving the energy efficiency of buildings, and eliminating emissions from the public transportation system. It sets up a system that creates a penalty for utilities who are not keeping up with clean energy transition benchmarks.

The revenue from penalty fees go into the D.C.’s Renewable Energy Development Fund, which will in part be used to help low-income communities transition to clean energy and adapt to climate impacts. Thirty percent of the additional revenue will be put aside for programs like weatherization and bill assistance for low-income households, as well as job training in energy efficiency fields. More than $3 million annually will also be allocated toward energy efficiency upgrades in affordable housing buildings.

D.C.’s commitment to act comes on the heels of the United Nations Intergovernmental Panel on Climate Change’s recently released report which finds that the world has just 12 years to act before the consequences of climate change will bring drought, floods, extreme heat, and poverty to hundreds of millions of people.

The good news is that people and communities across the nation are taking action, and cities and states, through commitments like the one D.C. just made, can keep America on track to prevent irreversible climate change, even while the president and his administration deny climate realities.

Since President Trump pulled the U.S. out of the Paris Agreement, thousands of local, state, and tribal leaders, businesses and investors, colleges and universities, health organizations and more, have stepped up to say that “We Are Still In,” as part of America’s Pledge to act on climate change. This long list includes mayors from more than 230 cities across the country, representing more than 70 million Americans, who are taking steps to address climate change by building stronger communities and cutting their fossil fuel emissions.

The American Cities Climate Challenge is helping local governments accelerate their ability to act on climate by boosting innovation, community engagement and mobilization, and delivering high-impact solutions. This initiative is assisting 25 cities, including Washington, D.C., make the Paris Agreement goals a reality.

Young people are organizing en masse to pave a path forward for our leaders to take serious climate action. Over 1,000 companies worth over $8 trillion have pledged to divest from fossil fuels. Local leaders are leveraging partnerships to revitalize their communities, save taxpayers money, and protect public health.

In 2019 the movement will continue to focus on achieving commitments like D.C.’s in cities across the country. Let us keep building the movement, honor the Paris Agreement, and bring real solutions to communities on the frontlines of climate change.

When we are looking to our nation’s capital for climate leadership, and we don’t see it from the White House, all we need to do is look to city hall. President Trump is not the end all and be all on climate action in the U.S. The American people are. Let’s take our power and vision for a sustainable planet and healthy communities to our mayors and city councils, and together we will transition to clean energy, stop climate change, and provide opportunity and clean air and water for all communities.