While politicians are debating the merits of a massive job-creating effort known as the Green New Deal, jobs in solar power are getting harder to find.

The solar industry lost 8,000 jobs last year, a drop of 3.2 percent and the second straight year of declines, according to The Solar Foundation’s annual report out Tuesday. That’s a sharp change after six years of growth.

Solar jobs largely come from the manufacturing and construction of new rooftop panels and solar farms, so these employment numbers offer a snapshot of the entire industry. The losses come as experts call for a massive ramp up in solar power as part of a larger effort to displace electricity generated with fossil-fuels.

What’s driving this? The Solar Foundation, a nonprofit research firm, lays most of the blame for job losses on President Donald Trump’s tariffs. Trump imposed tariffs against imported solar panels, along with two key materials — steel and aluminum,. Companies, uncertain about exactly how these tariffs will work, have put the brakes on operations. By last June, companies had canceled or delayed the construction of $2.5 billion worth of solar facilities, according to Reuters.

We can also chalk up some of the job losses to more local government quirks.. The two states that saw the biggest job losses were California (9,576), and Massachusetts (1,320), according the report. California companies have less incentive to build more solar farms because the state is ahead of its targets for renewable energy. And there was some policy uncertainty in Massachusetts as the state government crafted new targets for solar power. It issued those targets last September, and afterward saw a rise in applications to build more panels. 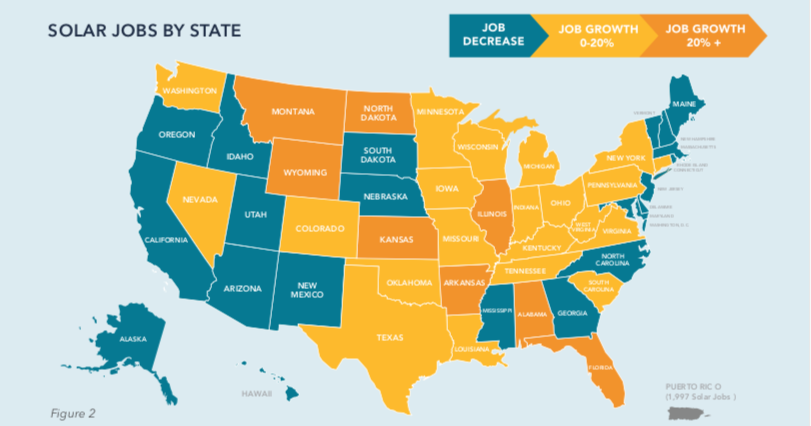 The Solar Foundation anticipates a turnaround soon. This year, for instance, solar companies will need to begin construction on projects to take advantage of a tax credit that expires next year.

“Despite two challenging years, the long-term outlook for this industry remains positive as even more Americans turn to low-cost solar energy and storage solutions to power their homes and businesses,” said Andrea Luecke, executive director of the foundation.

It’s important to remember that The Solar Foundation’s not-so sunny report is a single source of data (though the Department of Energy’s official numbers have been roughly in line with this nonprofit’s).

It’s also important to remember that solar is just one sector of a clean energy economy that includes everything from home insulators to train-engine designers. The DOE has not yet released its annual report on employment for 2018, but its report from May of last year showed increases in energy efficiency and wind power jobs dwarfed the contraction in solar jobs.