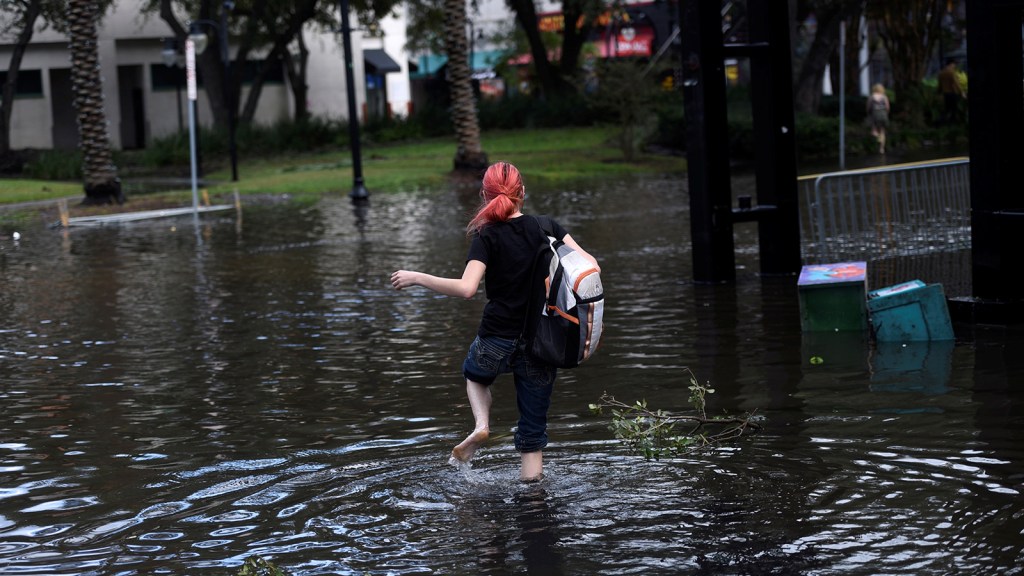 The clearest link between abortion and climate change is that most people flee, screaming, from conversations about both of them. But if you’re at a loss for ways to help those recovering from Hurricane Irma or Harvey, please don’t.

Strong reproductive rights, as we’ve argued before, are one type of climate resilience. Women need easy access to abortion and contraception to better handle all the challenges that climate change will deal them. But now, as the Gulf Coast states reckon with the damage of Hurricanes Harvey and Irma — and the impending threat of their friends Jose and Katia — we’re seeing exactly how extreme weather exacerbates the need for abortion access.

Kenya, a patient counselor at a Houston abortion clinic who requested we not include her last name, describes Harvey’s aftermath: “The calls start coming through: ‘I need to do this, but I don’t have the means.’ Some women lost everything. They don’t have flood insurance. They don’t have the family support.” The financial need that drives the decision to terminate a pregnancy, she says, becomes even greater in the wake of such a natural disaster.

To compound the problem, states in the direct path of increasingly devastating hurricanes, as it turns out, are the ones with some of the most limited access to reproductive healthcare. Texas, Florida, and the rest of the American south suffer from exceptionally anti-choice state legislatures. The Guttmacher Institute has found that 93 percent of women of reproductive age in the region live in states that are “extremely hostile” to abortion.

State laws dictate up to 72-hour waiting periods to get abortions; ban or severely limit access to late-term procedures; remove insurance coverage of abortion; or impose unnecessary restrictions and limitations on, say, the hallway widths of abortion clinics, which can force them to close. (That last example, when instituted in Texas, was found unconstitutional in a 2016 Supreme Court decision.) The majority of Gulf Coast states’ counties lack an abortion clinic: From 73 percent in Florida to 99 percent (!) in Mississippi.

These restrictions uniquely affect already-marginalized women: non-white, low-income, and/or undocumented — the same women who are disproportionately impacted by climate change.

OK: How can you help?

Let’s talk about abortion funds. If you’re a woman of limited means in a state with scarce abortion access, there are a million and one barriers: Transportation to a clinic, lodging near the clinic, time off work, money for the procedure itself. An abortion fund is an organization that distributes money or direct services — like rides to a clinic, for example — to help overcome those barriers. And abortion funds act locally, which means that a donation to a specific fund can more directly target women in a particular area.

The National Network of Abortion Funds has a directory of funds across the country that you can search by state, if you’re interested in donating directly to women in Texas, Florida, Louisiana, or other states hit by Irma and Harvey. Some of them — in Texas, primarily — have started emergency disaster funds specifically to address post-hurricane need.

Angie Hayes is the executive director of Clinic Access Support Network in Houston, which provides transportation services for women seeking abortions in the Houston area. She tells me that her organization has been “unseasonably busy” due to already-scarce clinics in the Houston area being closed for an entire week due to Harvey flooding.

“Abortion is such a time-sensitive procedure, and clinics are trying to push two weeks of patients into a week and a half,” Hayes explains.

“The anxiety levels are high, after you go through [a disaster] like this,” Kenya, the patient counselor, explains. The women she counsels, she says, are confronting the decision to terminate or proceed with a pregnancy differently as they deal with everything else: The loss of a home, work, or even a family member.

“You don’t hear a lot about Red Cross, or any of those types of organizations, trying to help the patients who were considering those types of decisions,” Kenya says.

As we continue to face down increasingly frightening natural disasters — and those rights continue to be attacked on the legislative level — individual support of abortion access becomes ever more necessary.

Providing assistance to a disaster survivor seeking an abortion is an acutely impactful, if unexpected, form of on-the-ground help. You are not replacing a roof that’s blown off, nor the stocks of a flooded food bank, but you are restoring someone’s reproductive autonomy, which is a fundamental human right.

P.S. About that legislative level: As always, harass your representatives. While abortion remains a largely state-dictated issue, it’s under federal attack as well. NARAL Pro-Choice America offers a tool that tracks how representatives have voted on congressional measures relating to abortion access. Call them.