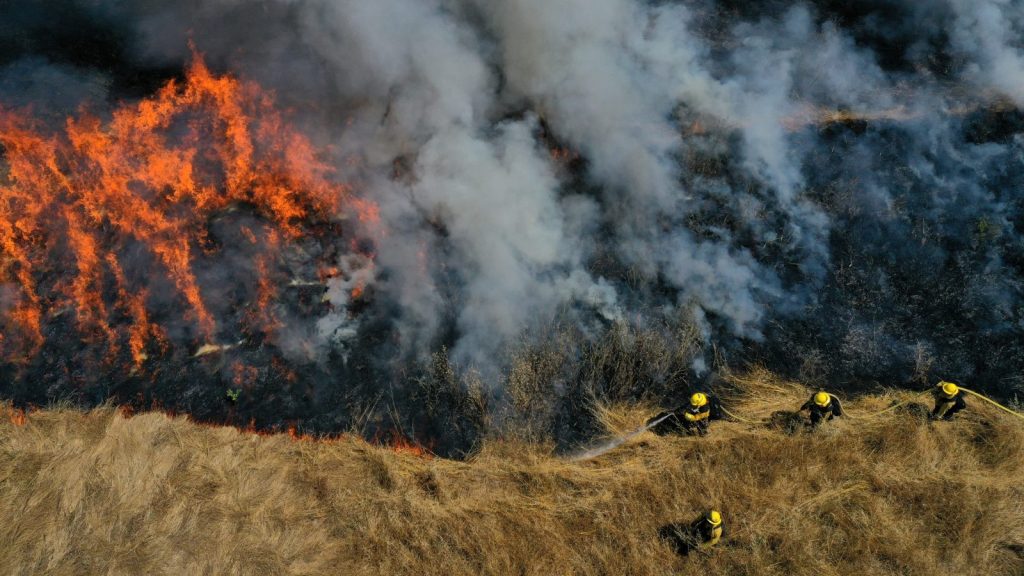 A number of Democratic candidates for president have released ambitious environmental plans that make the environmental platforms of yore look like yesterday’s lunch. And many of them include proposals aimed at correcting environmental injustices — protecting vulnerable communities that are often exposed to pollution or are on the frontline of climate change. Carbon tax, shmarbon tax, bring on the equity officers and resiliency projects.

Elizabeth Warren just became the latest candidate to unveil such a plan. It will direct at least $1 trillion to low-income communities on the frontlines of climate change, and contains similar themes to justice-centered proposals put out by the likes of Bernie Sanders, Kamala Harris, and Cory Booker. In at least one respect, however, the plan stands out: It contains a section on how Warren aims to rein in the rampant wildfires burning in the American West.

In addition to investing in wildfire prevention programs and improved mapping of active wildfires, Warren says she will prioritize land management in vulnerable communities by taking demographics into account as well as fire risk. But the most interesting part of Warren’s wildfire risk mitigation proposal is the portion on tribal governments.

As president, the senator says, she will collaborate with tribes in an effort to use traditional knowledge to stop wildfires before they start. She aims to incorporate “traditional ecological practices” and explore “co-management and the return of public resources to indigenous protection wherever possible.” Warren, whose effort to legitimize her Native American ancestry with a DNA test backfired last year, has incorporated tribes into her plans before, including in her public lands plan and, of course, her plan to empower Indian Country. Her latest effort is more than an attempt to atone for a campaign misstep — it’s an opportunity for tribes and government agencies to collaborate on addressing the climate crisis.

Before Europeans colonized this continent, indigenous Americans used fire in a variety of ways to clear land and keep forests healthy. Those traditions have been largely ignored by the federal government, to the nation’s detriment. And in many cases, prescribed burning — using fire to manage forests in a controlled way — is illegal unless conducted by a government or state agency. That means tribes are often prohibited from using their own traditions to maintain their lands. On top of that, one in five Native Americans in the U.S. lives in an area that’s at high risk for wildfires, but less than 18 percent of tribes have fire departments.

Warren’s plan doesn’t provide specifics on how she aims to implement indigenous knowledge at the federal level or whether her proposal will allow tribes to set prescribed fires without facing legal repercussions (a justice issue in and of itself). However, in an email to Grist, a Warren campaign staffer confirmed that the Massachusetts senator plans to partner with tribes to reduce the risk of wildfires on theirs and surrounding lands, if she’s elected president.

Wildfire prevention in the U.S. is complicated by a number of factors. Nearly 100 years of wildfire suppression has spawned dense, overgrown forests that are ripe for conflagration. Houses built in the middle of the woods, at the mouths of sweeping canyons, and in other fire-prone places prevent prescribed burning. When forests go up in flames, firefighter resources are spent protecting houses that should never have been built in the first place. Climate change is compounding the problem by creating ideal conditions for wildfires. The largest electric utility in the U.S., Pacific Gas & Electric, bankrupt from lawsuits related tp California wildfires, just shut off power to hundreds of thousands of people to avoid sparking a catastrophic fire this season. The move could cost the state’s economy upwards of $2 billion.

The Karuk tribe, located in northwest California, has long been waiting for the federal government to take notice of its wildfire prevention practices. In its climate change adaptation strategy published in July, the tribe says the fire crisis spurred by climate change is a strategic opportunity “for tribes to retain cultural practices and return traditional management practices to the landscape.” It notes that “there has been recent recognition of the validity of traditional ecological knowledge and the use of fire to manage for cultural resources, promote biodiversity, and to mitigate catastrophic wildfires.” That recognition, the tribe says, has created “an exciting political moment in which tribes are uniquely positioned to lead the way.” The Forest Service’s fire management goals, the tribe says, can be “best achieved through restoring Karuk tribal management.”

The moment hasn’t always been ripe for cross-collaboration. “They used to call us the ‘incendiary Indians,’” Lisa Hillman, a Karuk tribal member and environmental educator, told High Country News in March.  But prescribed burning, she said, is “the responsible thing to do.”

But restoring tribal management, something Warren says she will “explore,” not implement for certain, is easier said than done. Each state has its own rules around prescribed burning that need to be complied with, John Giller, fire and aviation director for the Forest Service, told Grist. And the landscape has changed since tribes had free reign over the land, he said. The biggest problem now is that non-indigenous Americans are building houses in the wrong places.

“Native Americans historically didn’t build houses up on hillsides, they didn’t invest in places where they knew it was a bad place to have a home because it will burn down,” Giller said. “It was common sense to them.” Common sense doesn’t seem to be very prevalent nowadays, he added. “The people who love the woods the most, who want to live out there in and amongst the trees are the ones causing the biggest problems.” Restoring prescribed burn rights to tribes would require maneuvering around existing homes near reservations, not to mention imposing restrictions on where new homes can be built.

The Democratic primary has thus far functioned as a big progressive policy brainstorm session. Warren’s plan to tap tribal knowledge to augment federal wildfire risk prevention strategies could pave the way for more candidates to make similar proposals. But if the candidates are serious about righting environmental injustices, one thing they’ll have to do is find ways to remove the legal and financial barriers to prescribed burning on and around reservations and also to disincentivize new construction in wooded areas. Otherwise, tribes won’t be able to actually use their own traditional knowledge.