Wetlands are a natural climate solution. Guess who's turning them into big polluters? 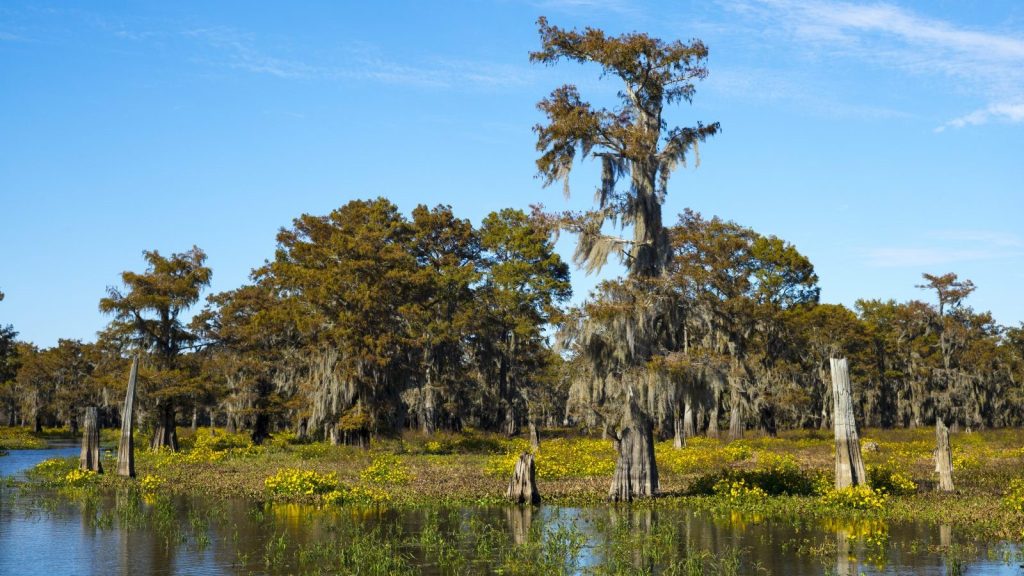 Wetlands are a natural climate solution. Guess who’s turning them into big polluters?

Like all healthy wetlands, the Mississippi Delta was once a carbon sink, an ecosystem that sucks carbon dioxide out of the air and stores it in the ground. Now it’s unclear if it still is. As the delta rapidly sinks into the sea, it could release into the atmosphere thousands of years’ worth of stored-up carbon, effectively becoming a major polluter.

Where did all this carbon come from? Well, before the Mississippi River was constricted by dams, levees, and canals, it would flood regularly, carrying layers of sediment and plant matter into the surrounding land. As water soaked into the ground and the layers built up, becoming the delta, these wetlands sequestered more and more carbon deep in the soil.

“We want to keep the soil in place, so all the carbon that has been sequestered into that soil stays there,” Melissa Baustian, a coastal ecologist at The Water Institute of the Gulf who focuses on the Mississippi Delta, told Grist.

The delta is now at risk of releasing up to 916 million metric tons of carbon dioxide over the next 50 years, as much pollution as nearly 200 million vehicles release in a given year. That’s according to a recent study published in Nature Climate Change, which looked at opportunities to reduce greenhouse gas emissions through wetland restoration. The researchers found that the Mississippi Delta is one such opportunity.

We’re now at a critical juncture: If restored, wetlands around the country could be part of the solution to climate change, rather than part of the problem. A recent study in Science Advances, for example, estimated that natural solutions to climate change like reforestation, improved agricultural practices, and healthy wetlands could help reduce greenhouses gas emissions in the United States by 21 percent. On top of their carbon-storing properties, coastal wetlands are the first line of defense against sea-level rise and flooding for many communities.

The Mississippi Delta loses about a football field of land every 100 minutes to open water, according to the Environmental Defense Fund. “It’s like we’re literally pulling the rug out from under these wetlands,” said Ariana Sutton-Grier, an author of the Nature Climate Change study and an associate research professor at The University of Maryland.

But it’s not just sea-level rise that contributes to wetland loss. Many upstream flood protection measures such as dams lead wetlands to be starved of sediment, explained Sutton-Grier, also the director of science for the Maryland and D.C. chapter of the Nature Conservancy. Sediment is critical for withstanding sea-level rise because it helps elevate wetlands. On top of dams, oil and gas infrastructure further disrupt wetland ecosystems.

While the Clean Water Act has helped slow wetland loss in the United States by helping to regulate direct impacts on wetlands, it doesn’t account for upstream impacts. “We’re not protecting our coastal wetlands with most of our environmental legislation because we are not monitoring and regulating what goes on upstream,” Sutton-Grier said.

While forests have the potential to sop up the most carbon, the carbon stored in wetlands — known as blue carbon — comes with important benefits. “Per hectare, blue carbon can store up to four times that of a terrestrial forest,” said Emily Landis, the wetland strategy lead at the Nature Conservancy. “You’re getting more bang for your buck.”

Louisiana is already making some headway in preventing the continued loss of the Mississippi Delta. The state invested in an ambitious $50 billion Coastal Master Plan, which would involve moving structures on the river to reroute sediment to the estuaries and creating marshes. These restoration efforts could reduce emissions from the Mississippi Delta by 35 percent, as the study notes. Yet it still might not be enough to save the delta.

The authors behind the plan are refreshingly blunt about what is at stake: “This is our home,” they write.“Our actions over the next two decades will decide whether Louisiana’s coast survives.”