What is your town's risk of wildfire? New media tool lets you see for yourself 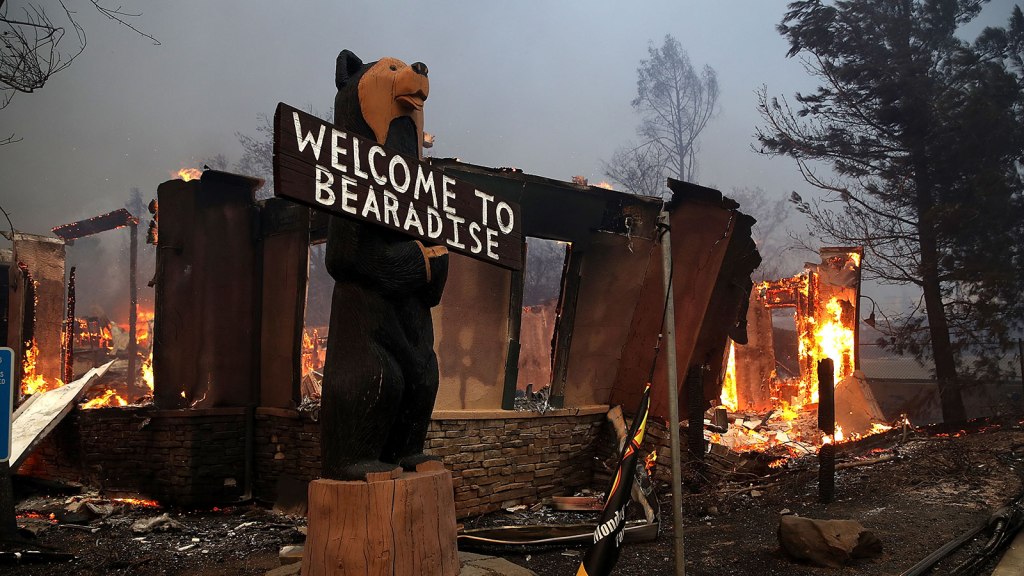 Justin Sullivan / Getty Images
In the line of fire

Which California town might be the next to burn? That’s the driving question behind Destined to Burn, the brand new media package produced via a partnership between the AP, Gannet, McClatchy, and others. The project examines how California can prevent wildfire devastation.

Wildfires have always been a risk in drought-prone California. But due to climate change’s drying effects on the soil and vegetation, burns are getting bigger, deadlier, and more expensive for the Golden State. Just last year, the Camp Fire killed almost 90 people and completely leveled the town of Paradise in Northern California. The climate-induced tragedy was 2018’s most expensive natural disaster.

Since then, many communities throughout California have been grappling with how to adapt to this type of threat.

And they may be right to worry. One in 12 homes in the state of California is at high risk from wildfires. Using data from the U.S. Census Bureau and Cal Fire Maps, the Sacramento Bee recently released a search tool, which Californians can use to find out how much of their towns might be in the danger zone.

Based on their analysis, there are more than 75 California towns and cities in which at least 90 percent of residents live in “very high fire hazard severity zones,” as designated by Cal Fire. As part of the Destined to Burn package, The Sacramento Bee highlighted 10 California communities from that list: Shingletown, Nevada City, Colfax, Kings Beach, Pollock Pines, Arnold, Wofford Heights, La Cañada Flintridge, Rancho Palos Verdes, and Harbison Canyon.

In 6 out of these 10 communities, 100 percent of residents live in very high fire hazard zones — at least, according to 2010 census info. In Nevada City, the hometown of Grist’s very own Nathanael Johnson, 3,064 out of 3,068 residents live in high hazard areas. (A number that may leave some wondering: What’s the deal with those four lucky people?)

But aside from their exceptionally high wildfire risk, there isn’t that much that unites the communities on the Bee’s list. Residents of the affluent Rancho Palos Verdes (the most populated city on the list), for instance, don’t seem to be sweating too hard about wildfires. Scott Hale, an assistant fire chief for Los Angeles County, told the Sacramento Bee: “This being a coastal community, we don’t get the type of brush and that kind of fire behavior that you might get in somewhere like Paradise.”

Kings Beach, on the north shore of Lake Tahoe, is a popular tourist destination. Because so many of the homes there are vacation rentals, it could be harder to mobilize the local community to push for more fire prevention measures.

In contrast, Nevada City is taking its fire prevention measures seriously. The city launched a Goat Fund Me campaign in December, hoping to raise enough funds to rent brush-clearing ruminants to maintain the city’s lands, a method that has caught on throughout California and beyond. Residents have also taken fire prevention into their own hands, creating citizen-led controlled burn squads and even helping out neighbors who may have trouble clearing dry brush near their homes.

The list isn’t exactly intended to predict the next “Paradise.” The data has its limitations — age being one of them. A new census is approaching in 2020, and Cal Fire is currently at work on a new set of fire hazard maps, which will incorporate wind patterns and other important factors. Instead, the tools put together by Gannett, McClatchy, Media News, and the Associated Press, are designed to be used as a resource as communities figure out how to prepare for their unique wildfire risks.

“Our goal with this collaboration is to put a spotlight on policy issues that can and should be raised in the halls of the state Capitol and by local communities,” wrote McClatchy Regional Editor Lauren Gustus of the project. “This is a wicked problem with no easy answers. And the more information we can share about where and how we’re falling short, the quicker we can come together on potential solutions.”