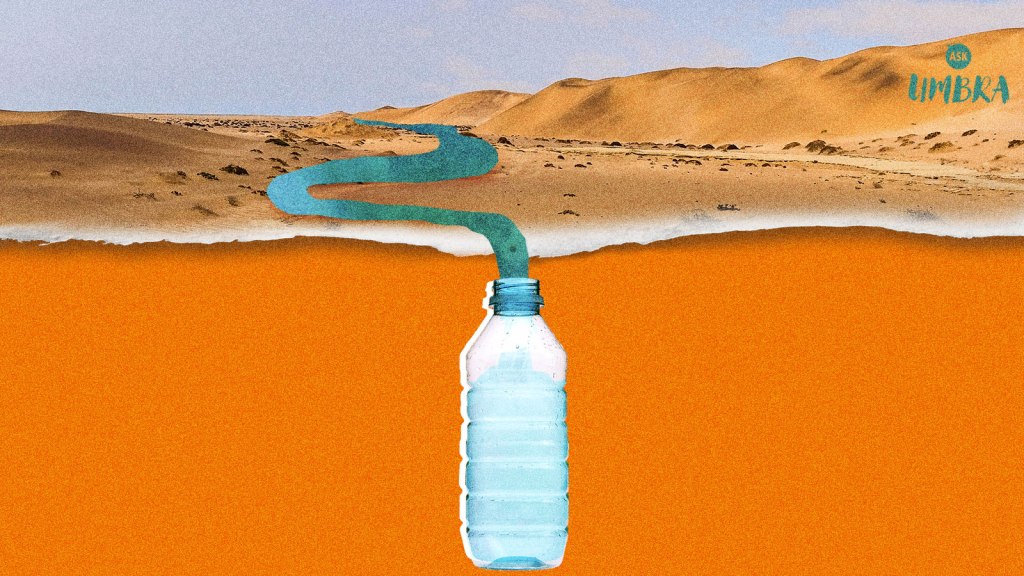 Why are bottled water companies targeted more severely than other types of beverages?

Nothing has the potential to inspire guilt in the heart of an environmental ally like having to buy a 16.9 oz single-use bottle of Aquafina or whatever from the Hudson News before your flight to Pittsburgh because you lost your Klean Kanteen somewhere on the Seattle lightrail (uh, not based on a real life incident). Bottled water is such a symbol of useless waste it’s almost comical, like Phyllis Nefler slurping Evian tallboys in bed in Troop Beverly Hills.

Bottled water is marketed on its purity, but there’s no guarantee that the water you buy in a plastic container is cleaner or purer than what you could get out of the tap. In fact, it’s probably sprinkled with tiny, tiny bits of plastic components, because that’s what it comes in. And then when you throw that plastic away, it leaches more infinitesimal bits of itself that will never go away into the ecosystem, and that was all for 750 milliliters of water. Congrats!

And then there’s the budgetary argument against paying money for bottled water. It seems foolish to waste your money when perfectly good, very-close-to-free water is all around — public drinking fountains, the kitchen sink, the bathroom sink! (More on this later.) Why would you pay for it, and in doing so, add to the global heap of single-use plastic?

And then there’s the ugly, damning (damming?) capitalist underbelly of the bottled water industry. Bottled water is a commodity, extracted from one place and sold somewhere else for profit. But many activists argue that companies are not paying their fair share. Nestlé, the largest bottled water conglomerate in the world, has made a business of buying the pumping rights to water sources near small communities all over the continent for as little $524 per year.

“Usually they’re making these proposals in small communities that are struggling economically and struggling to bring in new industries,” says Maura Fahey, staff attorney at the Crag Law Center. “And the way that they incentivize these communities is by promising lots of jobs, and I think that doesn’t always pan out. That turns out to be a bust for community because it doesn’t create as many jobs as they were told, and then their water supply ends up getting diminished.”

Fahey worked on a case where a Nestlé bottling plant proposal was blocked in Cascade Locks, Oregon. The community fear, she says, is that a bottling company can gain an unchallenged stake in a community’s water source, and then they have little or no incentive not to take as much of it as they can.

There are other communities that have successfully blocked similar proposals, like Kunkletown, Pennsylvania in 2016. But Nestlé bottling plants have popped up unhindered in some of the most bold and baffling locations: The bone-dry desert of Arizona; a California national forest in the midst of a drought; and yes, even a small Michigan town about a hundred miles away from Flint. The fact of bottled water as a commodity can seem so criminal because it has to come from somewhere. A company is profiting by taking valuable hydration from an ecosystem, putting it in a bottle, and selling it to you. That seems particularly unforgivable as plenty of communities, especially across the West, start to reckon with water scarcity.

Those environmental, economic, and justice arguments are often at the crux of the “severe targeting” I believe you’re referencing in your question, THIRST. A single-use bottle of water is often held up as the defining example of a product that solves a nonexistent problem while simultaneously creating a new one. So it’s no wonder that some climate activists have scoffed at those who profess their sincere efforts against the carbon apocalypse while clutching a plastic bottle of Fiji water. It’s like, hope that hypocrisy juice goes down extra-smooth, pal!

But let’s play devil’s advocate for a moment. Bottled water can be a literal lifesaver, and I don’t mean for irresponsible Klean Kanteen owners. Water is supposed to run from the tap unrestricted and nearly free of cost, and it’s also supposed to be safe to drink. For billions of people across many developing countries, this is not the case — and nor is it true for residents of an increasing number of municipalities in the U.S. There is Flint, of course; my hometown of Pittsburgh; and, most recently, the city of Newark. Even in the wealthiest country in the world, tap water is not guaranteed to be either free or safe.

After contamination is — usually belatedly — revealed, bottled water can seem like a “savior” (or, more accurately, a “necessary, ideally temporary alternative for some very, very flawed infrastructure”) for a parched public.

As for the justice argument against bottled water, activist Gary Wockner, executive director of the organization Save the Colorado, makes the counterpoint that bottled water doesn’t rank as highly as pop or beer on the “morally heinous” scale of commodity beverages. Beer and pop require water resources to make, of course, and more so than just plain water on its own. The Coca-Cola company has done unspeakable things in both its conquest of natural resources in struggling countries and marketing of sugary soft drinks. The single largest water consumer in Fort Collins, Colorado is, according to Wockner, the beer conglomerate Anheuser-Busch.

And yet, when it comes to hypocrisy, simple H2O has a clear leg up on its bottled-beverage competition. Companies that bottle water are taking something that humans need to survive, selling it at a markup, and putting it into a container that’s inevitably going to pollute the environment. And contrary to your feelings around 4 p.m. on a Tuesday, pop and beer are hardly necessary to survive. There’s an argument in international law that access to sanitary water should be a human right because, quite simply, we need it to live. That right has been recognized by the United Nations, but not by the majority of national governments (including the United States).

So how could a region legally safeguard its water resources against extraction for profit? A Georgetown Environmental Law Review article proposed that water resources be protected from pollution and resale by the same legal mechanism that outlaws the trafficking of species. In Crag Law Center’s Cascade Locks case, they filed a challenge to the state of Oregon’s proposal to transfer water rights from the public to Nestlé, and that allowed a public comment process where Cascade Locks residents could voice their concerns.

If Nestlé or Coca-Cola or any other similar behemoth shows up to put a bottling plant in your community, my advice to you is to call a lawyer and your city councilperson. If you lose your Klean Kanteen and find yourself subject to the temptations of single-use hydration, just white-knuckle through the guilt and get a replacement canteen as soon as you can. (Of any brand. I don’t care. I stole this Klean Kanteen out of the Grist supply closet.)