What's the 'Green New Deal'? The surprising origins behind a progressive rallying cry. 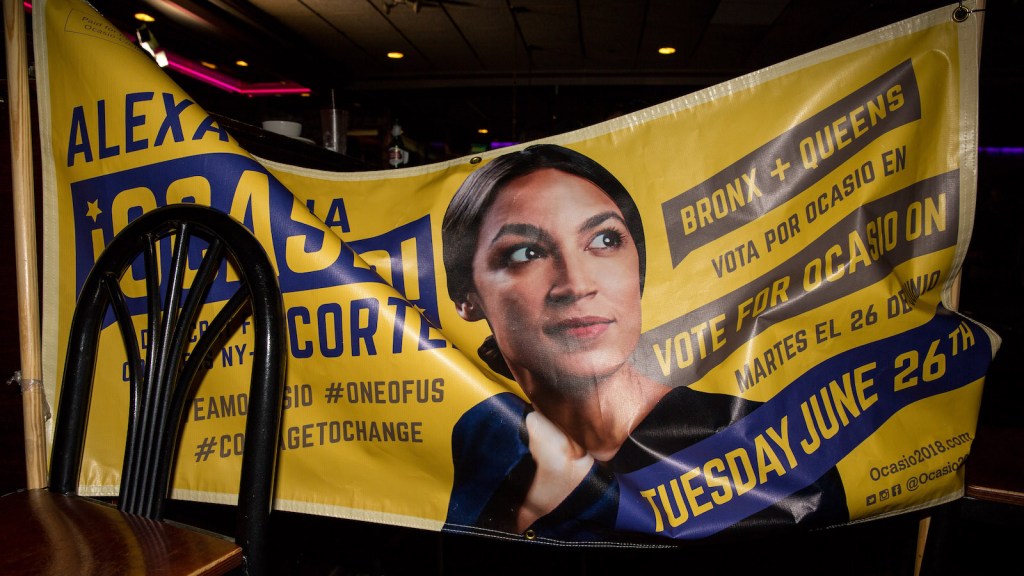 What’s the ‘Green New Deal’? The surprising origins behind a progressive rallying cry.

The man who popularized the phrase that left-leaning Democrats now use to describe a vision for a radical government spending plan to combat climate change is a self-described centrist “free-market guy” with a New York Times column.

It was Thomas Friedman who in 2007 started calling for a “Green New Deal” to end fossil fuel subsidies, tax carbon dioxide emissions, and create lasting incentives for wind and solar energy. At the dawn of the global financial crisis, the “New Deal” concept that Franklin D. Roosevelt coined 76 years earlier to describe the labor reforms and historic spending on infrastructure and armaments that pulled the United States out of the Great Depression proved attractive.

Friedman’s ideas made it into the mainstream the following year when presidential candidate Barack Obama added a Green New Deal to his platform. In 2009, the United Nations drafted a report calling for a Global Green New Deal to focus government stimulus on renewable energy projects. A month later, Democrats’ landmark cap-and-trade bill — meant to set up a market where companies could buy and sell pollution permits and take a conservative first step toward limiting carbon dioxide emissions — passed in the House with the promise of spurring $150 billion in clean energy investments and creating 1.7 million good-paying jobs.

But, by 2010, austerity politics hit. The cap-and-trade bill, known as the American Clean Energy and Security Act, died in the Senate. In Britain, the Labor Party, acting on a proposal that a team of economists calling themselves the Green New Deal Group drafted, established a government-run green investment bank to bolster renewable energy — only for the conservative Tories to sweep into office months later and begin the process of privatizing the nascent institution. Balanced budgets and deficit hysteria became the dogma of governments across the developed world. Talk of a Green New Deal withered on the vine.

Today the phrase is making a comeback among the ranks of Democratic insurgents running on left-leaning platforms in 2018 primaries across the country. Far from serving as shorthand for middle-of-the-road climate policies, the decade-old slogan is being reborn as the kind of progressive platform that increasingly looks like the only policy approach capable of slowing the nation’s output of planet-warming gases and adapting to a hotter world.

Progressive activists have long complained that there is no climate change version of a “Medicare for all” bill — legislation that serves both as a vehicle for sweeping reform and a litmus test for how far a Democratic candidate is willing to go on an issue. Yet the Green New Deal seems to be filling that three-word void.

From the beginning, there were competing definitions of what “Green New Deal” meant.

Friedman’s version focused on policies that compelled the “big players to do the right thing for the wrong reasons.” He liked a lot of what Obama enacted — including $51 billion in “green stimulus” and a $2.3 billion tax credit to clean energy manufacturing — even after the administration shelved the Green New Deal rhetoric after the midterm election.

Sure, big-ticket policies like a carbon tax or a cap-and-trade system and sunsetting the $20 billion in subsidies to oil, gas, and coal each year never came to fruition. Even the regulations the administration did achieve — like tightening fuel economy standards and incentivizing utilities to produce more renewable energy — disintegrated as soon as the Trump administration took over.

Subsidies for wind, solar, and battery technology managed to survive proposed cuts in the tax bill Congress passed last year because Republicans in states that have come to rely on those burgeoning industries saved them. For Friedman, that is proof that lasting climate policies are ones that make private renewable energy companies powerful enough to sway politics.

“The more the market does on its own, the more sustainable it is,” he said. Even as the Trump administration dismantles Obama’s climate legacy, Friedman feels the battle shouldn’t be for more aggressive government intervention to wean the economy off fossil fuels, but on messaging that focuses on the patriotic, nation-building aspects of greening the economy.

But then there’s Richard Murphy, a British tax scholar who also claims to have coined the phrase “Green New Deal” around the same time as Friedman. “I don’t even know who Tom Friedman is. If he used the term, it’s complete coincidence,” he says.

In 2007, Murphy, a political economy professor and founder of the London-based Tax Justice Network, started meeting with a cadre of newspaper editors, economists, and environmentalists to discuss the coming financial crisis and how any fiscal stimulus issued in response could be used to tackle the ecological crisis already underway.

This “two-birds-one-stone” approach proposed an aggressive spending plan that called for investing public funds in renewable energy, building a zero-emission transportation infrastructure, insulating homes to conserve energy, and establishing training programs to educate a national corps of workers to carry out the jobs.

Murphy’s cadre, which named itself the Green New Deal Group, was more ambiguous on how to fund all this green development. He said they supported “straightforward deficit spending” — meaning government money that’s borrowed rather than already raised through taxes — as well as quantitative easing, a strategy in which the government buys bonds to inject money straight into the economy. Rather than buying bank bonds to prop up private financial institutions, Murphy suggested instead establishing a green infrastructure bank that would issue bonds the government could then buy back — a policy with enough leftist bona fides to be nicknamed the “people’s quantitative easing.” He also proposed closing tax loopholes.

The ideas caught on, and in 2010 the ruling Labour Party established a green infrastructure bank. But later that year the conservative Tories swept into office, sold the bank and scaled back renewable and energy-efficiency subsidies.

Revival of an idea

Talk of a Green New Deal went quiet for years in the U.S. and Britain. But a new wave of progressive candidates, spurred by the organizing that went into Senator Bernie Sanders’ 2016 Democratic presidential bid, began reviving the term in the past year.

It could be a winning strategy. Polls show that Americans overwhelmingly support efforts to reduce climate pollution and increase renewable energy capacity, even if it comes with a cost. Sixty-one percent of Americans who voted for Obama in 2012 and then for Trump in 2016 supported requiring a minimum amount of renewable fuels even if it increased electricity prices, according to Cooperative Congressional Election Study’s 2016 survey results analyzed for HuffPost by Data for Progress, a left-leaning think tank. That increased to 76 percent among voters who picked Obama in 2012 but sat out the 2016 race, and it surged to 85 percent among those who voted for both Obama and, in 2016, Democratic nominee Hillary Clinton.

The data showed similar support for strengthening enforcement of the Clean Air Act and Clean Water Act, even if it cost U.S. jobs. Fifty percent of Obama-Trump voters said they would support such regulations, increasing to 77 percent among voters who picked Obama then sat out the 2016 election, and 83 percent for Obama-and-Clinton voters.

Some have called for federal spending plans similar to the World War II economic mobilization to bolster renewable energy and rebuild roads and bridges to make them more resilient in extreme weather.

Alexandria Ocasio-Cortez, the Democratic Socialists of America-backed challenger who trounced Democratic Representative Joe Crowley Tuesday night in a working-class Bronx and Queens district in New York City, outlined a similar vision. She called the Green New Deal proposed in Obama’s 2008 platform a “half measure” that “will not work.”

“The Green New Deal we are proposing will be similar in scale to the mobilization efforts seen in World War II or the Marshall Plan,” she said by email. “It will require the investment of trillions of dollars and the creation of millions of high-wage jobs. We must again invest in the development, manufacturing, deployment, and distribution of energy but this time green energy.”

Others suggested tying such a plan to a federal jobs guarantee, a policy that has recently gained traction among a similar cadre of candidates.

“Our infrastructure is crumbling,” said Democratic candidate Randy Bryce, a union ironworker and Army veteran running to succeed House Speaker Paul Ryan in Wisconsin’s 1st Congressional District. “We need to reinvest in our country. I can’t think of a better way than to have that be a future that’s reliant on renewable sources.”

“The backbone of this proposal will be a jobs guarantee, something like what FDR proposed in the Second Bill of Rights,” he said by phone. “There’s so many jobs out there that the private sector won’t create that would literally help protect our planet and save us from impending climate doom.”

Other candidates were more vague. Kevin de Leon, the California state senator and union-backed progressive who is facing off against U.S. Senator Dianne Feinstein, a fellow Democrat, did not identify specific proposals for federal spending policies on climate. But he hinted that he would support large-scale federal spending to bolster a renewable infrastructure push, agreeing that Republican concerns over the deficit — the wellspring of austerity politics — proved bogus as the GOP-controlled Congress passed a massive tax cut law last year.

Left-leaning visions for a Green New Deal have even gained traction in state-level races. Abdul El-Sayed, the underdog progressive running in Michigan’s gubernatorial race, proposed a green infrastructure bank to start building renewable energy projects across the state, and he said he’d use his bully pulpit to push for federal action.

“We’re thinking about it at the state level, which both gives us a level of concreteness that is helpful and also allows us to be very specific about solving these challenges encapsulated under the umbrella of Green New Deal,” he said.

“We’ve watched as our infrastructure has crumbled,” he added. “We understand the responsibility to stand up against climate change, create jobs, and rebuild that infrastructure — it’s a clear, crystalline opportunity.”

Still, some climate activists see the term as trite and ineffective. Some climate organizers say it’s time to abandon the phrase “new deal” and embrace something newer and more forward-facing.

But for others, the phrase offers a helpful entry point to a policy program that would, in essence, buck with the last 40 years of neoliberal market-based solutionism and government spendthrift.

“The Green New Deal is a great framing, and I’m glad it’s catching on, but this whole thing needs to be at least as comprehensive as the New Deal,” said Ashik Siddique, who serves on the Democratic Socialists of America’s climate working group. “We are talking about the need to transform the physical infrastructure of every sector of the economy.”

“It’s very clear that something possibly even bigger scale than that is necessary now. Getting people used to thinking of it in those terms is welcome,” he said, then he laughed. “Even Tom Friedman is talking about it.”