Where is Bernie's climate plan? 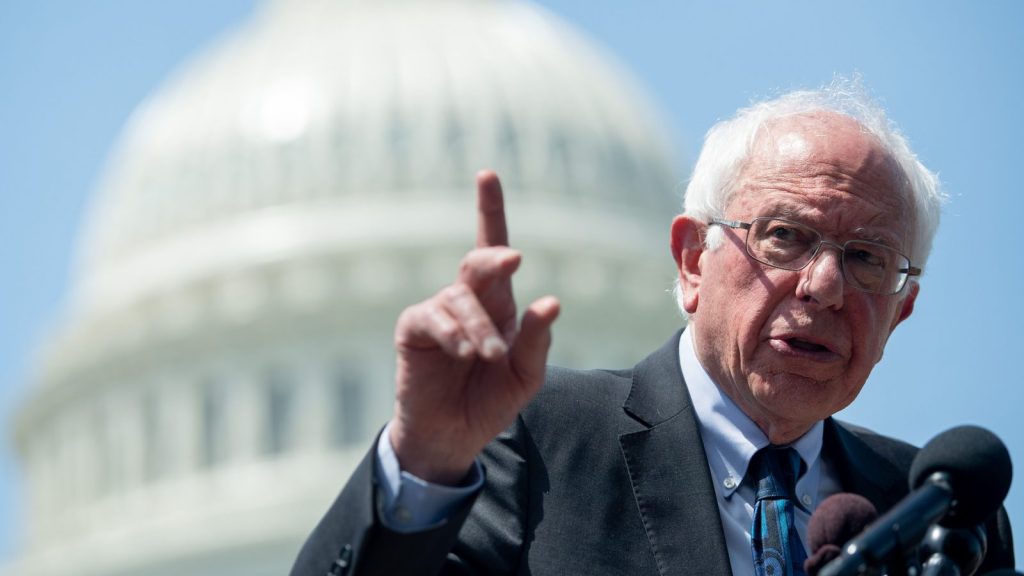 Where is Bernie’s climate plan?

When the Sunrise Movement held the last stop on its Green New Deal tour in Washington, D.C., in May, Bernie Sanders was the understated star act. A crowd of 1,500 people at Howard University gave the 2020 candidate a standing ovation even before he began his stump speech about the climate crisis. The Vermont senator’s speech to a younger generation of activists echoed his typical 2016 and 2020 platform points, calling for the elimination of trillions in oil and gas industry tax breaks and creating worker protections under a Green New Deal.

Following Sanders’ act was the newest star in the progressive movement, Alexandria Ocasio-Cortez, who obliquely criticized a campaign advisor for former Vice President Joe Biden, who told Reuters that Biden would look for a “middle ground” solution to climate change. “I will be damned if the same politicians who refused to act then are going to try to come back today and say we need to find a middle-of-the-road approach to save our lives,” Ocasio-Cortez said.

Only two weeks later, Biden released a climate change plan that bumped up his position on the environmental group Greenpeace’s scorecard, from near-failing to a “B,” mostly on the strength of the plan’s commitment to clean energy investments, path to net-zero emissions, and international leadership. He joined six other candidates who have now released a detailed platform explaining their vision for climate change, including Elizabeth Warren, Beto O’Rourke, John Delaney, Michael Bennet, John Hickenlooper, and Jay Inslee, who’s centered his campaign around the issue.

The notable exception in this group? Bernie Sanders, one of the frontrunners who still hasn’t released his own plan. This fact hasn’t gone unnoticed by Greenpeace or other climate activists agitating for a robust policy discussion, especially with climate ranking as a leading concern among Democratic primary voters.

The silence has left many activists wondering where the senator has been when they hoped to see their longtime ally lead a robust and comprehensive discussion.

“Senator Sanders needs to align his campaign with his track record in the Senate and release his vision for what he would do as president to tackle the climate crisis,” says David Turnbull, of the advocacy group Oil Change U.S. “We know he has bold ideas and sincere concern; it’s critical he lay those out and contribute his ideas to the debate.”

The candidate scorecard from Greenpeace also knocked down Sanders’ grade, so that he’s in third place after Senator Cory Booker and Inslee, for not yet calling “for a full, managed phase-out of the fossil fuel industry” in a detailed plan. “We’re waiting with bated breath for the senator’s climate plan to articulate what his ambitions are moving forward,” says Janet Redman, Greenpeace’s climate campaign director.

According to environmentalists familiar with the discussions, the senator has been working on an answer since last winter. His Senate office has been laying the groundwork for a comprehensive proposal on a Green New Deal, collecting input from climate activists like Sunrise, the think tank New Consensus, and environmental justice advocates.

Where is it? On the eve of the Sanders’ first debate of this election, there still was no specific timeline yet for its release. “It’s still in progress,”a spokesperson from Sanders’ Senate office told me, “and we intend have it out shortly … the process is slow,” and there has been “consultation with a lot of stakeholders and activists.”

Sanders could point to his robust legislative record, of course. Gearing up for his first presidential run when Sanders was emphasizing his edge on climate concerns over Hillary Clinton, he sponsored a series of bills in 2015 including the Clean Energy Worker Just Transition Act that focuses on a clean energy training and investments for struggling Appalachian workers, the End Polluter Welfare Act, closing $130 billion in fossil fuel tax breaks over the next decade, and the Climate Protection and Justice Act that sets a price on carbon to cut emissions 80 percent by 2050 (a general target progressive climate activists now have argued would do too little). He’s been a cosponsor, along with several of his fellow Senate presidential candidates, on plenty of other ideas that have grown more mainstream in the Democratic Party, including Oregon Senator Jeff Merkley’s Keep it In the Ground Act focusing on fossil fuel production, and the 100 by ’50 Act to reach 100 percent renewable energy by 2050.

It’s not like he is avoiding the issue on the campaign trail, either: In a recent speech laying out his vision for democratic socialism, Sanders called for a bill of rights that includes a right to a clean environment, embracing an idea that is gaining ground in bills introduced locally.

Still, the candidate hasn’t presented a systematic and comprehensive vision that threads the needle on climate solutions across the economy, especially on how to exploit the existing powers of the executive branch. He’s embraced the Green New Deal, certainly, calling for one to “save American families money and generate millions of jobs by transforming our energy system” on his campaign website.

“He’s been extremely good throughout the years in criticizing and raising awareness about the problem. In 2016, some people felt that he was not as strong in providing solutions,” says R.L. Miller, founder of the PAC Climate Hawks Vote. “Now that he’s one of the frontrunners, it is incumbent on him to provide solutions, especially because the Green New Deal was not mentioned at all in last night’s debate. I am very anxious to read his Green New Deal bill or climate proposal.”

In past cycles, Sanders’ less visible role in the ideas race around climate would be easily eclipsed by his focus on health care and good-paying jobs. His robust legislative record would suffice. And maybe, when the time comes for his substantive Green New Deal paper, he’ll fill a void with the coherent vision climate activists were hoping for in the first place.

But in 2019, many voters have been hungry for more. Climate change has ranked as a top issue for Democratic primary voters in poll after poll. Two of the top three frontrunners have also come out early with a plan, or multiple plans, to burnish their climate credentials. A long-shot candidate has staked his entire bid around the issue.

Climate activists aren’t questioning Sanders’ commitment, but some have begun to question whether he is leading on the issue in the 2020 race.

Greenpeace’s Redman knows from the 2016 campaign that Sanders is committed to a clean energy economy and making sure workers are brought along in the transition. “But it’s not just about the clean energy economy, it’s all about the science driving down fossil fuels,” she says. “We’re missing a whole side of that conversation except in Governor Inslee’s fossil fuels plan. It’s great we have it, but we need more than one candidate to be talking about what is such a critical issue. We’re hoping Senator Sanders will add to the conversation.”