COVID ruined my travel dreams. What do I do with my life now? 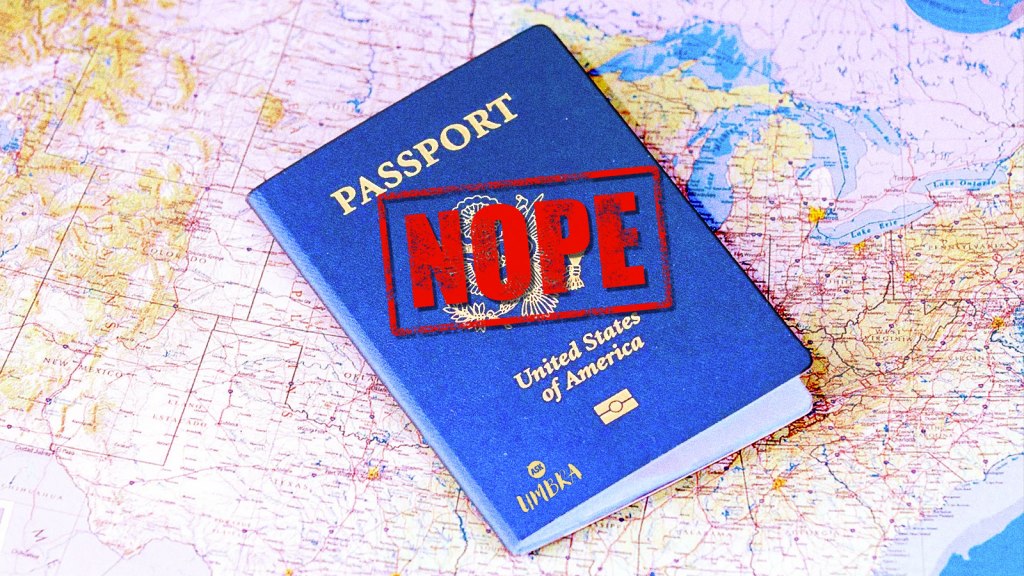 COVID ruined my travel dreams. What do I do with my life now?

A big part of how I think of myself is as a world traveler. My longtime goal has been to visit every continent on Earth! But due to COVID my U.S. passport is basically worthless. What should I do with myself now?

— When All Novelty Disappears, Ennui Remains

Your question reminds me of a certain type of Tinder profile that proliferates in the bog-like dating app ecosphere. First, the series of very posed portraits against Maldivian beaches, Andean mountainscapes, or Sicilian villas, and then the sole descriptor of personality: some variation of “My passion is travel!”

To a dating app user who loves to psychoanalyze strangers based on a handful of curated photos and a couple of sentences of self-description (me), this kind of profile basically screams: “I don’t know what I like or what is important to me and I am probably insecure about it!” I find it kind of bizarre that “travel” has somehow become categorized as a hobby, because it can mean doing really any variety of things as long as it’s in a place that is not your home. Summiting a mountain in Nepal, microdosing poolside at the Dubai Four Seasons, or WWOOFing across Thailand are all easily lumped under traveling.

I adore a vacation, but it’s hard to argue that “travel,” writ large, is something that will necessarily challenge you and make you grow and give you perspective on your place in the world. And that’s usually the argument that people give to rationalize the cost — in terms of both dollars and carbon emissions — associated with flying all over the globe. But as an advice columnist, I am not here to ridicule. I am more than aware that there is a large number of people — privileged people, it must be said — who invest a ton of time and energy into expanding the collection of stamps in their passport pages, and many become more cultured and informed because of that. I am also aware that a lot of people turn to extravagant travel to escape dissatisfying aspects of their lives, and who among us could not sympathize with an escape right now!

That was then (pre-pandemic). While the United States once wrangled itself a desirable diplomatic position in the global power food chain (often by being meaner and richer and louder than everyone else), our botched national response to COVID-19 has since rendered us a dysfunctional leper with whom no one wants to be seen. The U.S. passport used to be one of the most powerful documents a world traveler could possess. Now the European Union has barred U.S. travelers from entry, and our neighbors to the north and south have closed their land borders to us. If this were a teen movie, this kind of comeuppance would be an entertaining and cautionary tale of hubris, but unfortunately it is my life. I am American, so I too am a leper. And so are you.

I’m not really here to argue for international sympathy for our big bully of a country. However, I imagine it’s hard to chalk the situation up to karma when you consider that the “bully” is made up of 300 million-odd individuals, more than half of whom did not choose the incompetent leaders who have made us into said leper, and an unmeasurable proportion of whom are still suffering enormously due to the economic, mental, and physical impacts of the pandemic.

I don’t say what I’m about to say to make you feel bad about your globe-trotting dreams — it’s simply a fact that if the way you are primarily affected by this pandemic is that it’s restricting your travel, that probably speaks to the general security of your position in life. Regular international travel, and especially the sort that might lead you to include “world traveler” as part of your identity, is not cheap, and also requires a great bit of free time that’s arguably even more of a luxury than money.

That’s not something to be ashamed of! There is a big difference between shame and awareness, because I think the former can push you to tamp down any real, thoughtful engagement with the reality of your privileged situation.

The truth is, versions of your question, WANDER, have appeared in my inbox well before coronavirus was a threat to international mobility, but the quandary described has been more concerned with the carbon emissions expended on travel as a “hobby.” Well, that’s a valid ethical concern. An estimated 12 percent of Americans were responsible for two-thirds of all flights in 2018, with an average flight-related carbon footprint of 3.41 tons per frequent flier. For most wealthy people, flying constitutes a significant chunk of their carbon footprint.

But now cross-hemisphere trips aren’t really even an option, as you point out. One editor at Grist called the COVID-driven slew off international bans on U.S. travelers “Trump’s accidental climate plan,” which is pretty tragic, but hits on the fact that the carbon emissions attributed to American frequent fliers are likely going to be way down this year!

The reason I haven’t addressed those previous questions is that the answer is brief: If you feel guilty about climate change, cancel some of your international vacations and find a new hobby. But if you define yourself, at least partially, by your affinity for world traveling, that’s a little harder to do. We’re talking about questions of identity and purpose in the world, which are harder to parse.

You appear to be in the position in which your time and money are not themselves threatened by the various consequences of the pandemic, simply your options on how to spend those resources. The good news is that you ostensibly have a lot of time for introspection, and to figure out what is important to you and what you enjoy that don’t require boarding an international flight.

And the best part is that no one will judge you for floundering, for not being sure of yourself, for questioning your identity and how to live your life. I think that millions and millions of people are reformulating what their lives will look like over the next couple years, and I’d guess that the majority of them aren’t doing it from as secure a position as you may be in. This is an opportunity to really get to know yourself, and once there is a vaccine or competent national leadership or a sudden society-wide appreciation of scientific fact — whichever comes first! — you can debut that more self-assured and complete version of you to the world.

And if I see you on Tinder, I look forward to reading a bio that doesn’t include any synonym of “explorer.”