How do I tell my family that I'm done with gifts? 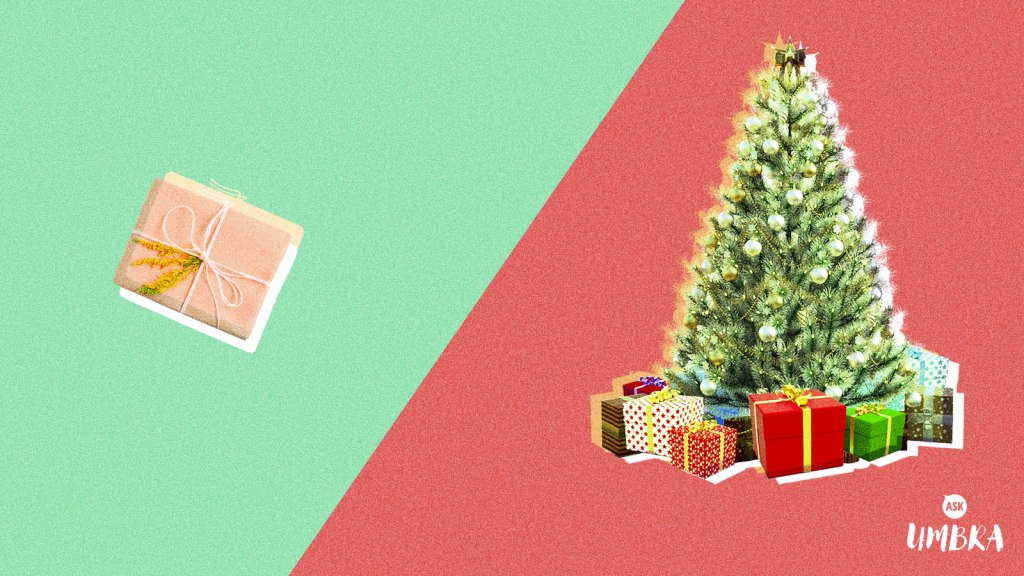 How do I tell my family that I’m done with gifts?

My husband and I disagree about how to handle holiday gifts. He grew up in a family where presents are the main event, and the expectation is for everyone to give multiple presents including many gag gifts (often made of plastic and never used). I grew up in a house where presents were optional, and the idea of lots of stuff makes me feel wasteful and stressed. Every year we clash over consumerism, climate change, and the Christmas spirit. Any tips for how to communicate and compromise without ruining Christmas for ourselves and our two young kids?

My family celebrates Hanukkah, which involves gifts but not as intensively or grandly as Christmas, at least in my experience. My first real Christmas was with my ex-boyfriend’s large Catholic family in Rhode Island, and I remember being pretty blown away by the scale of celebration. The carefully decorated tree was large enough to feel tall even against the vaulted ceiling of the living room, and on the morning of December 25, it towered over a veritable carpet of glossy, wrapped gifts that expanded across the room. I was astounded as I, the relative newcomer girlfriend, came away with a larger heap of presents than I’d received from my own flesh-and-blood family.

There’s a narrative that expansive gift-giving like that is compensation for something dark. I suppose it can be, but that was not my experience with his family. They were warm, kind, generous, and genuinely and deeply loving of one another.

To a welcomed-in outsider, that over-the-top Christmas celebration felt like a celebration of abundance: let’s appreciate how fortunate we are and how much we have. And it felt really cozy and secure and good to be in pajamas until noon, surrounded by torn wrapping paper and mugs of coffee, looking out past the glowing tree onto the frozen yard.

Modern Christmas as its best self, I think, is a celebration of security and abundance and love, but that all takes place against a pervasive background fear that those things might be impermanent. And when those things feel lacking, there’s even more pressure to put on a show to celebrate them, which can result in true financial disaster for families with limited means.

So how did the consumerist Christmas tradition get started? Well, to quote Alexis from Schitt’s Creek, it’s been a journey.

In Christmas: A Biography, author Judith Flanders describes how in very olden times in Great Britain, Christmas was a real Jane Jacobs-approved rager-in-the-streets situation, where wealthy lords would treat the peasants who lived around them to big public feasts. However, this became controversial when Christmas crossed the Atlantic. Not too far from where I first celebrated Jesus’ birthday — which is most likely not actually Jesus’ birthday — the founders of the Massachusetts Bay Colony instigated the first War on Christmas to take place on American soil. The Puritans banned Christmas celebrations in the 1600s because gift-giving, feasting, and not-working were collectively considered both too fun and too pagan, which were used more or less interchangeably at the time.

Despite the Puritans’ best efforts, the community-oriented version of the holiday continued to thrive. But in the early 1800s, the nouveau riche of industrialized America were like, this feels a bit too rowdy. So a group of wealthy proto-influencers called the Knickerbockers pushed for a more domestic Christmas celebration focused on inter-household gift-giving.

And so those are the origins of the huge cultural pressure to shower both children and fellow adults with gifts in late December. But however artificially or nefariously constructed, deeply embedded cultural practices like Christmas are often tied to very real emotions. There’s nothing fundamentally wrong with that, in my opinion.

But it makes criticism very tricky. I don’t think your husband or his family would react super well to a history lesson delivered by you on why the modern practice of elaborate Christmas gift-giving is an inherently capitalist, anti-urbanist scheme. Because they’ve built a whole family tradition around a bountiful, gift-oriented Christmas, and family traditions are extremely hard to change.

But since you are raising two young children, you are starting your own offshoot of the family and creating your own traditions, and you get to have a voice in that. I wrote to Sarah Nichols, a relative of a Grist colleague, who implemented a very limited presents policy for Christmas for her nuclear family this year: The kids’ gifts would just come from her and her husband, not from the extended relatives. I got her advice on explaining such a policy to family members.

“I tried not to assume that they loved giving tons of gifts, even if that’s what they’d done in the past,” she responded, noting that there may be relatives — regardless of hallowed tradition — who are relieved to be freed from the financial and emotional burden of tons of gifts. “I tried to focus on what the change meant to me, in terms of reducing stress and being the best I can be for my family. And then I made it very, very clear that this wasn’t to judge anyone else for their way of celebrating, or for their religious beliefs.”

Nichols’ husband was on board with this policy, and it sounds like yours needs more convincing. But to de-escalate this annual argument between the two of you, I might suggest framing your position as wanting to create Christmas traditions for your family that are low-stress and not rooted in materialism — rather than making a direct comparison to his family’s Christmas.

And this can also be a gradual process! No need to cold turkey the gifts! As I wrote comprehensively last week, there are a wide variety of gift options that are useful and heartfelt and don’t exist for the sheer sake of being given as gifts. I can even think of an anti-consumerist, climate-friendly reinvention of gag gifts: Raid your local thrift store or Buy Nothing group! Or, if you have one in your area, a creative reuse center! There is so much bizarre, bonkers, and fundamentally useless stuff floating around all of those places!

As a closing note, I’d just emphasize that your needs and values are worth being heard here. But it’s so important to take Nichols’ advice and make clear that your aversion to Christmas consumerism isn’t a judgment on how other people express love or seek security. Be honest and be kind; it’s possible to do both.