New report says the Arctic is in dire condition 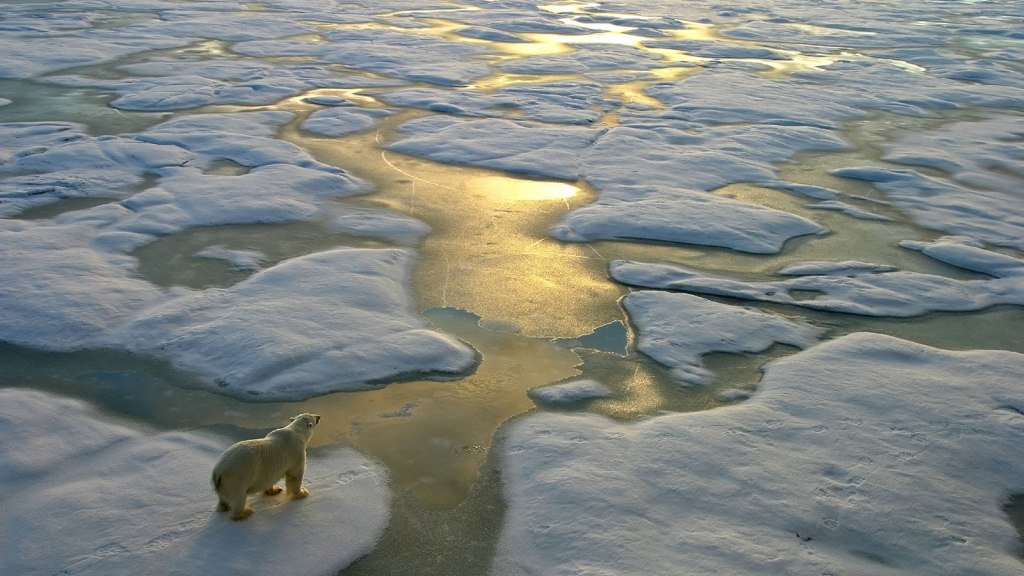 New report says the Arctic is in dire condition

Climate change is transforming Arctic ecosystems in unprecedented and troubling ways, causing vast sheets of ice to melt, impacting local wildlife and threatening not just indigenous populations who live there, but communities around the world, researchers warned in a dramatic new report issued on Tuesday.

The findings were laid out in the 14th annual Arctic Report Card, compiled by more than 80 scientists for the National Oceanic and Atmospheric Association.

Researchers observed many troubling trends in the region: Temperatures in the Arctic were the second-warmest on record for an 11-month period ending in August. The permafrost continues to thaw, potentially releasing up to 600 million tons of carbon into the atmosphere each year. And some fish populations in the Bering Sea, which supplies about 40 percent of the American seafood catch, have begun to migrate north as waters warm, threatening food webs.

“This warming is transforming Arctic ecosystems and presenting unique challenges for the region’s Indigenous peoples who rely on the stability of the environment for cultural and economic well-being, as well as for subsistence foods taken from their local lands and waters,” three of the report’s authors wrote in a summary of their findings. “The impacts of a changing Arctic are not confined to those who live there. Through global sea-level rise, the release of permafrost carbon, and its role in regulating global weather patterns, the Arctic is vitally connected to people worldwide.”

The researchers noted that the Arctic is warming more than twice as fast as the rest of the planet, due in large part to the region’s ice and snow. When temperatures rise and the ice melts, the color of the ground changes and absorbs more sunlight, further warming the region in a feedback loop that contributes to more climate change.

“This cycle is a critical reason why the Arctic has warmed at more than twice the rate of the global mean since the mid-1990s, a phenomenon known as Arctic amplification of global warming,” the report reads, which notes the Greenland ice sheet is losing about 267 billion tons of ice each year.

The report card also included perspectives from indigenous elders who have lived in the region for generations for the first time. The Arctic is home to more than 70 indigenous communities, who warned of a rapidly changing landscape that threatens “the entire Bering seafood chain.”

“The world from our childhood is no longer here,” the group wrote in the report. “Our young children today are seeing so much change, but it is difficult for them to understand the pace. We are losing so much of our culture and connections to the resources from our ocean and lands.”

A separate paper published this month found Greenland’s ice sheet is melting seven times faster than in the 1990s, threatening hundreds of millions of people with sea-level rise and impacting many of the Arctic’s enigmatic species. If the trend continues, the sheet alone would add an additional 3 inches of sea-level rise by the end of the century.

Delegates from more than 190 countries are currently meeting in Madrid this month as part of the United Nations’ annual climate summit, where they hope to hammer out how, exactly, the world can dramatically scale back greenhouse gas emissions. This year’s summit is the first “blue” conference, a nod to the important role the world’s oceans play in regulating the climate.

The focus couldn’t come at a more dire time: Climate change is wreaking havoc around the planet’s oceans, causing havoc like the mass, back-to-back coral bleaching events along Australia’s Great Barrier Reef. The oceans are also rapidly losing oxygen, threatening marine species and the planet’s fisheries, according to a landmark report released earlier this month.

Masses of ice around the globe are also under threat, affecting glaciers in Alaska and Greenland as scientists raise alarm about the dramatic potential for sea-level rise.

At the same time, President Donald Trump has continued to roll back American efforts to address the climate crisis. His administration formally began to withdraw the country from the Paris Agreement last month after the president continually attacked the accord as a “disaster” that would be too expensive.

The world is also lagging behind in its effort to reduce carbon emissions: A consortium of researchers warned earlier this month the planet was on track to hit a record high in 2019 once again.