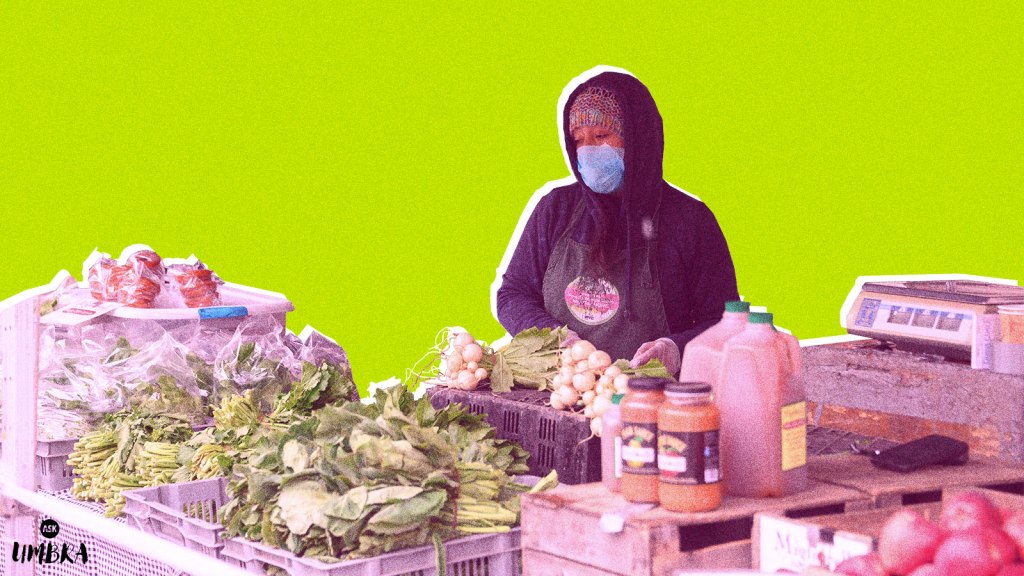 Grist / Noam Galai / Getty Images
Having It All

When it comes down to tangible impacts, which is more environmentally responsible: eating locally or eating plant-based?

I once had a really wonderful editor who asked me to look up the correct definitions of words that I used to describe things, which sounds like a really basic suggestion but actually makes you realize how the proper interpretation of a word completely changes the meaning of a sentence. Or in your case, a question. At the risk of getting all, “The Oxford Dictionary defines ‘love’ as…” here — first of all, Grist is a strictly Merriam-Webster shop — I did look up “tangible” to try to get at your larger goal with this question.

And it turns out it’s a real shitshow, the M-W entry for “tangible.” It covers a lot of ground. It can either mean “capable of being perceived especially by the sense of touch,” or “of being precisely identified or realized by the mind, or “of being appraised at an actual or approximate value.” What isn’t tangible, by those definitions!

Let’s quickly break down some of the major environmental impacts associated with your diet. There is water usage, which should be considered relative to local water resources; is your lettuce coming from California’s drought-stricken Salinas Valley (probably) or a perpetually damp corner of British Columbia? There is the impact of toxic runoff, most famously from the waste produced by livestock, but also from operations that use a lot of conventional pesticides and fertilizers. There is the impact of pesticide sprays, like the now-banned DDT, on the people who live downwind of the fields. There is soil degradation versus sequestration; is the farmer you’re getting produce or meat from destroying soil’s ability to chomp up carbon (that’s the technical term), or improving it? And, of course, there are the greenhouse gases produced by growing, harvesting, processing, and transporting the food you eat.

All of these metrics certainly meet your definition of “tangible” in that they can be measured, or “appraised” if you want to sound really scientific when talking about the impact of your food choices on the ecosystem. And there is not one “correct” way of eating that covers all of them. Either way, it’s a lot to process when it comes to making simple decisions like “what should I put in my grocery cart?”

The most effective change you can make to your diet, in terms of greenhouse gas reduction, is to go plant-based and limit meat consumption. That’s it. It’s also certainly lower impact in terms of water usage. When you get into degradation of air and water and soil, it gets a little more complicated; you could look for organic certification on your produce, but even then, overusing organic fertilizers can be harmful to microorganisms that keep soil healthy.

Suffice it to say, looking at a product’s label isn’t necessarily a great way to get a sense for its sustainability. The solution to that issue, of course, is to buy primarily from farmers whom you can ask about their growing practices — and those, generally, will be farmers near to you with whom you can meet and talk to face to face. That’s one reason that people concerned with buying ecologically sourced food are so into shopping at farmers’ markets, or from hubs like food co-ops that have a vetting process for their growers. And here’s where we have to return, again, to the meaning of “tangible.”

There are certainly strong environmental arguments for a more locally oriented food system, including (potentially) lower fuel use from fewer transportation miles and reduced food loss from fewer steps along the distribution chain. There are also the less, ah, logical reasons: You enjoy the experience of wandering up and down the farmers’ markets, the excitement of tomato season, the inexplicable satisfaction that comes from buying very fresh, seasonal produce and cooking it yourself.

Local food systems have also proven to be relatively pandemic-resilient. Coronavirus has revealed how disruptive it is to the meat industry when one of the country’s massive meatpacking plants has to shut down because someone gets sick — and how much those plants will put their workers at risk to avoid shutting down. Chain grocery stores have run out of staples like flour and chicken, so customers have been going directly to local food hubs and even grain and poultry farmers themselves.

As a result, some smaller local farmers are, for now, enjoying a sizable bump in business. Matthew Cox, who owns Green Bow Farm around Ellensburg, Washington, told me that his sales are up about 400 percent because so many more people are cooking at home and looking for high-quality ingredients, and grocery stores haven’t been able to meet the demand.

At the same time, a national survey of farmers by ResourcedNY found that about a third of those growers expect to go out of business if the current pandemic-driven conditions continue. Labor shortages mean that it’s harder to find people to harvest and process food — especially given the additional demand for packagers and retail workers. Many smaller farms rely on restaurant and wholesale accounts that have vanished due to coronavirus restrictions. And farmers’ markets themselves have transformed; reconfiguring spaces to promote social distancing at Seattle markets, for example, will mean there won’t be as much room for vendors.

This is a subjective statement on my part, but a food system that you can see firsthand and participate in, to some extent, more directly tends to be more tangibly satisfying than the alternative. The great challenge of getting people riled up about climate change, as we’ve covered extensively in this column, is that carbon emissions are fairly hard to visualize. They’re literally an invisible threat, unless you have one of those crazy infrared cameras. But that doesn’t mean that they’re not real and/or quantifiable. They certainly have a very noticeable impact, which you know if you’ve lived through a record-breaking heat wave or hurricane. And you can measure how much they grow from day to day.

Food, in contrast, is an inherently sensory and intimate experience, so shouldn’t the process of choosing your ingredients be at least a little bit intimate as well? There doesn’t have to be an ecological value in that; there is significant debate over the role of small, locally-distributing farms in a food system that will work for a climate-conscious world of 7, 8, 9 billion people.

There are already abundant signs that the very consolidated, large-scale food cultivation, processing, and distribution system is not working for our pandemic reality. But there are all kinds of obstacles to smaller, more locally-oriented food systems working, too. Cox, for instance, describes how the more boutique slaughterhouses he’s depended on are now booked up into 2021 due to large-scale slaughterhouse closures. Chris Petry, owner of Oh Yeah! Farms in Leavenworth, Washington (and, full disclosure, a friend of mine) said he’s heard farmers’ markets could potentially halve their weekly vendors due to space concerns. That would be detrimental to small growers who depend on those markets for the bulk of their revenue.

Jonathan Pereira, executive director of Plant Chicago, wrote to me that “many smaller markets are shutting down this year, and larger markets are adapting for pickup models or strict safety measures and logistics for their markets.” The farmers’ market run by Plant Chicago, for example, is expecting to go much smaller and focus on delivering produce to low-income customers.

But small farms cannot take on feeding the entire world; it is not realistic. And if they evaporate, it just does not seem super likely — given the current political and economic climate — that what will take their place will be particularly climate-forward. And that would be terrible news for the environmental footprint of anyone’s diet.

So the very short answer to your question, which I have answered in typically lengthy fashion, is that a diet that has tangible environmental benefits has a lot of plants and relies, at least partially, on some local producers. So buy from them, certainly, but make sure your local legislators know that we all need farms to survive this pandemic, too.

CORRECTION: This post has been updated to correct the name of the organization that Jonathan Pereira runs.