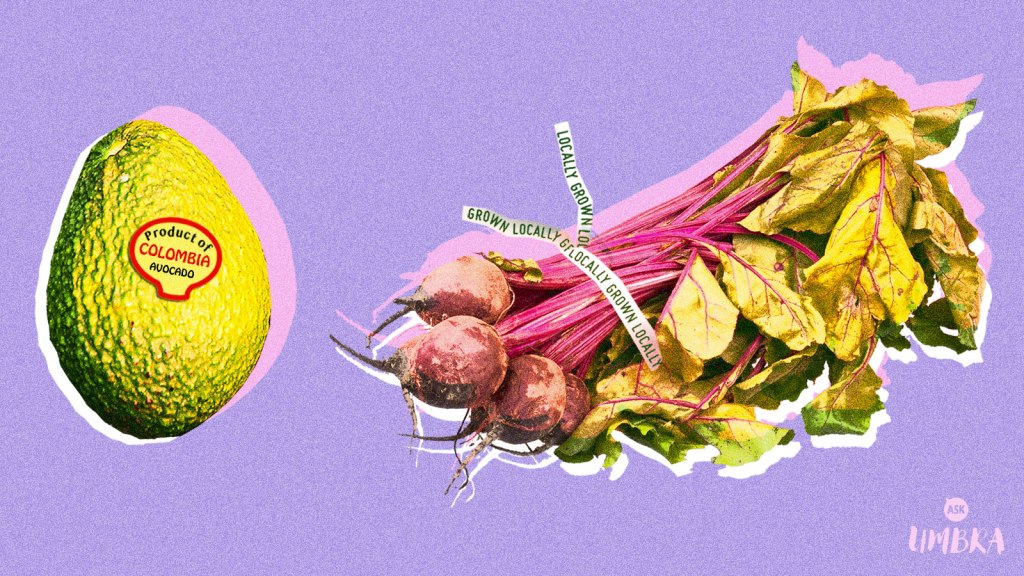 Does my choice to purchase local food hurt the livelihoods of farmers in other countries whose produce I was purchasing before?

— Have Unfamiliar Nectarines, or Get Regional Yams?

This is a question that seems complicated, but it’s actually fairly straightforward. But to get to the straightforward part, we have to start with the reason one purchases local food.

“Buy local!” is the often vociferous refrain of so many food activists, back-to-the-land proponents, and tote bags, who tend to cite a few reasons. If you try to eat food that comes from roughly where you live, the philosophy goes, the food you eat will be better-tasting, better for you, and ultimately more meaningful.

The philosophy doesn’t fully stand up to factual scrutiny. Better-tasting? Probably — produce that’s in season and has traveled fewer miles tends to taste better than produce that’s been picked before it’s ripe to survive a long transport. (The most obvious example: Winter tomatoes.) Better for you? Really up for debate; nutritional value is a famously complicated thing to measure and compare.

More meaningful? Well, that’s a definitively subjective value. I can tell you from personal experience that I take great delight in cooking something with ingredients that I know came from a farm nearby because I purchased them from the farmer herself. It makes me feel like I’m eating food that I’m supposed to be eating in this innate, biological way, like I’m a deer foraging in the woods — despite the fact that even a moment’s scrutiny reveals how absurd it is, since I’m using electricity and a stove and a $300 pan and opposable thumbs and all kinds of things that deer don’t have!

But purchasing fresh produce from local farmers does do one concrete thing: It cuts out a lot of middlemen, including agricultural conglomerates, distributors, and grocery chains. From a climate perspective, that’s significant because cutting out the energy used in refrigeration, storage, and transport reduces the carbon footprint of a particular food item. And the fewer steps an orange takes to get to your hands, the less likely it is that its counterparts will perish on the way — between 30 and 40 percent of food gets lost in the storage and transport process. That’s one reason that Mamta Mehra, senior fellow with the climate solutions organization Project Drawdown, says that a more locally-based food system is considered necessary to mitigate climate change.

That’s great news for you, HUNGRY, because it sounds like you’re trying to support a locally-based food system! But there’s a tension between two ideals at work in your question. The first ideal we’ve already discussed: We’re told as environmentally and economically conscious Americans that we should develop our local food systems more, that we should empower and support our local farmers. The second is that, as Americans, we’re told that we have a responsibility to use our relatively mammoth consumer power to support those less fortunate abroad.

I regret to tell you that the second ideal is rather presumptuous, at least when it comes to the perception of our own power.

Unfortunately, not much of the cash you hand over for a Colombian avocado goes directly to an independent, small-scale farmer. That has to do with all the aforementioned intermediaries that stand between you and him. But it’s also due to the fact that generally, the food that’s coming to the United States from other countries is grown by huge agricultural conglomerates in those countries. Douglas Gollin, a development economist at Oxford University, points out that the most vulnerable farmers in the world aren’t connected to global markets at all. They’re much more affected by things like drought and floods and other natural disasters than by the purchasing decisions of Westerners.

“There’s so much in between the choices we make as consumers and what happens to farmers in developing countries, it’s such a hugely complex series of things,” says Gollin. “I don’t want to absolve people of responsibility, but we don’t want to overestimate the power of our individual consumption patterns to change the world.” Especially since factors like government policies and international treaties shape the choices available to us to begin with, he added.

That can feel kind of deflating, but you want to know what you can do to make a more climate-friendly and economically equitable food system — within your power as someone with some money who buys food. I can offer some very rudimentary ground rules.

Buy less meat. The demand for cheap meat, particularly in Western countries like the United States, is a powerful market force. It also dictates the landscape of global grain markets, which has all kinds of implications for climate change. An astonishing amount of land is devoted to growing grain for livestock and not for humans, and it’s often in ways that aren’t great for soil health. That has long-term negative impacts on farmers’ ability to grow on their land, and it also means soil can’t sequester carbon as well as it’s supposed to. What’s more, we all know that cattle-raising pumps a lot of warming methane into the atmosphere, so the less demand there is for beef, the better our chances for maintaining a (reasonably) stable climate.

Buy produce locally. Addressing food waste and food loss is a majorly important aspect of climate mitigation, according to Project Drawdown, and produce is more susceptible to getting spoiled en route to your mouth than any other food item. Lettuce is very needy and delicate! A very simple way to limit the distance and steps that your fruits and vegetables have to travel from field to fridge is to buy directly from farmers who grow near where you live. It sounds like you’re already doing that, so — great!

Buy more whole foods. (But not necessarily from Whole Foods.) Douglas Gollin suggests that the less processing a food item goes through, the greater the proportion of what you pay for it goes to the farmer. More dried chickpeas, less freezer chana masala from Trader Joe’s.

For commodities that can’t be grown locally, like coffee and chocolate, buy fair trade. Fair trade certifications ensure that farmers — particularly smallholders who aren’t often able to benefit from access to wealthier consumers — get paid properly for the crops they grow.

I feel like I’ve been a bit of a downer here! Your food choices are important for reasons that I’ve elaborated on before: You’re living in line with your values, and you’re modeling a reality that you’d like to be universal. So I want to end on a positive note, which comes from a conversation I had with Jennifer Bernstein, a geographer who studies environmental movements at the Spatial Sciences Institute at the University of Southern California.

“We have these behaviors that we feel are meaningful because of how they make us feel connected to the environment, to the economic system, and it makes us feel powerful,” she said. “We need to do everything we can to reduce carbon emissions, but also admit that certain things matter more quantifiably, and some are essentially a religious practice. They all matter, just in different ways.”

If buying locally grown food is important to you, do that. There are so many overwhelming factors that dictate the screwed-up way food grows and moves and gets eaten in this world. You’re being thoughtful about how you contribute to that system, and that’s how systems start to change.