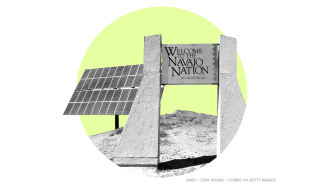 The Navajo Nation finalized leases for two new solar plants on its reservation last Tuesday. The plants will create hundreds of construction jobs and generate millions of dollars in revenue for the tribe over the next three decades.

The Navajo Nation currently owns the Kayenta Solar Project that produces 55 megawatts of energy and is capable of powering 36,000 homes across the tribe’s lands. It will be joined by the 200-megawatt Cameron Solar Generation Plant that will generate energy for one of Arizona’s largest utilities, the Salt River Project. The Cameron solar plant will bring in $109 million over the next 30 years in tax revenue, lease payments, and energy transmission payments.

Also incoming is the Red Mesa Tapaha Solar Generation Plant, which will produce 70 megawatts of solar for the Utah Associated Municipal Power Systems and create $7 million in lease payments to the tribe over the project’s lifetime.

Some of the money the tribe nets from these two developments will go toward connecting more Navajo families to the grid and keeping energy prices down for the community. Around 15,000 of the 50,000 households on Navajo lands do not have electricity.

Research has found that Navajo land has the most renewable energy potential of any tribal land in the United States. Tribal President Jonathan Nez said in a statement that the Navajo Nation is embracing that future: “Our communities were once heavily dependent on fossil fuel energy, but now we are seeing change.”

The Biden Administration told a federal judge on Friday that it will not stop oil from flowing through the Dakota Access pipeline while the Army Corps of Engineers conducts a new environmental assessment of the project, which could take a full year. A case brought against the pipeline by the Standing Rock Sioux tribe is ongoing, and the judge could still order the pipeline to be shut down in the coming weeks.

New measurements of snow accumulation in the Western U.S. foretell upcoming water shortages for ecosystems, farms, and reservoirs. About 90 percent of the West is in drought, with “exceptional” and “extreme” drought conditions, as defined by the U.S. drought monitor, in about 40 percent of the region. All this means there will likely be no reprieve from another major fire season.

A group of public school superintendents criticized the Biden administration’s moratorium on oil and gas leasing on federal lands after the oil industry fed them statistics and talking points, according to emails obtained by the watchdog group Accountable.us.