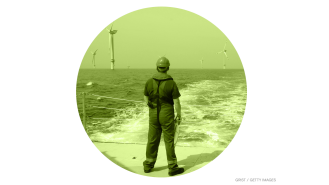 On Friday, the Bureau of Ocean Energy Management, or BOEM, proposed leasing eight new areas to offshore wind developers off the coast of New York and New Jersey in a shallow zone known as the New York Bight. The agency says the proposed lease area has the potential to host more than 7 gigawatts’ worth of wind turbines, or enough to power more than 2.6 million homes with emissions-free electricity.

It’s a step toward the Biden administration’s goal of developing 30 gigawatts of offshore wind by 2030. And in keeping with the president’s promise to create good-paying jobs and ensure that the energy transition benefits disadvantaged communities, BOEM will attach a number of stipulations to the leases.

Developers may be required to make agreements with union labor for wind farm construction, a provision that the North American Building Trades Union applauded. There will also be mechanisms to ensure that projects provide benefits to underserved communities, and bolster the domestic wind manufacturing industry. In an effort to address concerns from the fishing industry that it has been left out of the conversation, developers may have to submit regular reports on how they are engaging with other ocean stakeholders.

The agency will be taking comments on the lease areas and stipulations for 60 days before making a final decision to auction them off.

A rapidly melting glacier in Antarctica that was already known to be contributing to sea-level rise more than any other glacier on the continent is disintegrating even faster than before. A study published on Friday found that the glacier, known as Pine Island, is now disappearing 12 times faster than it was at the beginning of 2017.

Seven of the world’s wealthiest nations, known as the G-7 countries, agreed to end direct government financing for coal projects during their annual summit over the weekend, but failed to make any concrete plans to reduce emissions. Activists and experts accused the nations’ leaders of making hollow promises.

A gas explosion in the city of Shiyan in central China killed at least 12 people on Sunday and severely injured dozens more. The cause of the accident is still under investigation.

Investors to G-7: Get real