It’s Monday, April 5, and cities have nurtured a bicycling boom during the pandemic. 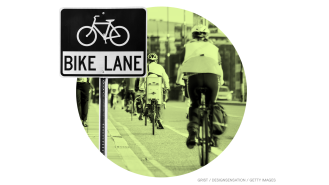 It’s a chicken-and-egg question: Does building bicycle infrastructure encourage cycling, or does increased demand from cyclists drive the construction of infrastructure? According to a new study of 106 European cities, the former has been true during the COVID-19 pandemic. In cities that added biking infrastructure, biking rates went up 11 to 48 percent compared to cities that did not. And biking didn’t just increase on streets with new or better lanes — it also increased on surrounding streets throughout the cities.

To maintain social distancing and decrease the likelihood of COVID-19 exposure on public transit, public health officials in many countries have encouraged cycling as an alternative. Many cities widened walking and biking paths, blocked off streets to cars, set up pop-up bike lanes, or reduced the driving speed limit to enable safer biking.

Cycling is a great way to decrease emissions from the transportation sector, which is the biggest source of greenhouse gases in the United States. Increased bike usage is also linked with reduced mortality thanks to the decreased air pollution and regular exercise it enables.

Whether the increase in biking will continue once COVID-19 restrictions are lifted is uncertain, but there’s some research indicating that once people find an alternative way of commuting, they stick with it. The cycling surge may be here to stay.

A large wastewater pond in the Tampa Bay region of Florida sprang a leak last week, sparking the evacuation of more than 300 nearby homes due to fears that a larger breach would send a flood of toxic water into residential areas. The pond stores water contaminated with phosphorus and nitrogen from an old phosphate plant.

Monsoon season brought flash floods and mudslides to eastern Indonesia and East Timor on Sunday, submerging neighborhoods and killing more than 100 people. Deforestation has increased the risk of such disasters by uprooting soil, which can then turn into flows of mud during heavy rains.

A new, sweeping study of the meat and dairy industry found that top U.S. livestock and dairy producers have insufficient or nonexistent plans to reduce their emissions, and that industry lobby groups have spent millions trying to block climate and environmental regulations. Animal agriculture is responsible for more than 14 percent of global greenhouse gas emissions, but industry groups have funded research downplaying the connection between agriculture and climate change.

Google Maps, but make it eco-conscious