It’s Monday, May 24, and the pope is getting a new, electric popemobile. 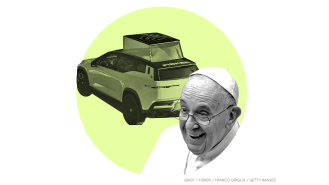 Pope Francis is switching out luxury car interiors for recycled plastic bottle-derived alternatives and carpets made out of ocean plastics — in his new all-electric, battery-powered car. U.S.-based electric car startup Fisker is building the car, and the California company has even designed a custom-made bulletproof top so that the pope can safely wave and greet his disciples as the car cruises along.

The Fisker vehicle will be the pope’s second zero-emissions car. The first, a hydrogen powered Toyota, doesn’t get much use because of the challenges involved in finding fuel during the pope’s travels.

Pope Francis has been a staunch supporter of addressing climate change, frequently calling on the world to take swift action. The Vatican announced last year it will gradually replace its service fleet with all-electric vehicles. And the pope’s modified version of Fisker’s Ocean SUV will arrive sometime in 2022.

The Ocean is set to go into production for the public in November. The shorter-range versions will cost around $37,500 in the U.S. (before factoring in the federal tax credit). A high-performance version will have a 300-mile range, be able to accelerate zero-to-60 miles per hour in less than three seconds, and transfer battery power to EVs with depleted batteries.

Despite an ongoing environmental review of the Dakota Access Pipeline by the U.S. Army Corps of Engineers, a federal judge ruled on Friday that it can continue operating. The Standing Rock Sioux and other tribes had asked the judge to shut down the pipeline since it is operating without a key federal water-crossing permit.

Tree ring records from Yellowstone National Park that go back more than 1,000 years show that the park’s most intense warming has occurred in the past 20 years, a new study found. The research comes as the National Park Service reckons with a shift from managing land for total conservation to deciding what to save.

The Interior Department is issuing oil-drilling leases that were sold during the final days of the Trump administration, even as it continues a moratorium on auctioning new leases in order to complete a comprehensive review of the federal oil and gas program. Environmental advocates from the organization WildEarth Guardians say the administration should not be finalizing those Trump-era leases until the review is complete.