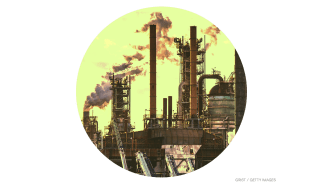 Three major oil companies faced rebukes from shareholders and the courts on Wednesday for not aligning their strategies with the threat of climate change.

Exxon, which has long planned to double down on oil and gas production even as the planet’s temperature rises, faced a revolt at its annual shareholder meeting, when a small hedge fund managed to elect two candidates to the company’s board who want Exxon to prepare for a low-carbon future.

Meanwhile, at Chevron’s annual meeting, a preliminary vote showed that 61 percent of the company’s shareholders supported a proposal to reduce “Scope 3” carbon emissions — or the emissions released when consumers buy and burn oil and gas — despite protests by the company’s board of directors. And, in the Netherlands, a Dutch court ordered Royal Dutch Shell to reduce its carbon emissions by 45 percent over the next nine years, setting a precedent that could be used in other countries to force companies to curb their carbon pollution.

All three results show that oil and gas companies are increasingly under pressure to tackle the risks that come from an overheating planet — and change their business practices accordingly. “It is a bit of a shock,” said Andrew Logan, head of oil and gas at the nonprofit investor network Ceres. “The fact that this [Exxon] vote happened on the same day as the news about Shell and the strong votes for Chevron — it adds up to this sea change.”

The world is running out of time to reach its climate goals, according to the World Meteorological Organization. In the next five years, there’s a 40 percent chance that the average annual air temperature will be 1.5 degrees Celsius higher than preindustrial levels — the threshold that international leaders agreed to limit global warming to in the 2016 Paris Agreement.

The Biden administration filed a court brief on Wednesday defending a massive drilling project set to produce more than 100,000 barrels of oil a day for the next 30 years, despite President Joe Biden’s goal to cut U.S. emissions in half by 2030. The project will be located in Alaska, which has warmed twice as fast as the rest of the United States over the last 60 years.

The powerful Cyclone Yaas hit India’s east coast on Wednesday, leaving tens of thousands of people homeless and three dead. It struck a little more than a week after Cyclone Tauktae ripped through India’s west coast, causing evacuations and killing more than 100 people.