A new report from AgFunder (an online venture capital middleman) presents evidence of a surge of private money going into food and farm technologies. In 2015, investors put $4.6 billion into the field, up from $2.3 billion in 2014. That’s a good thing for the environment, mostly.

I include that “mostly” caveat because the biggest chunk of that money went to food e-commerce — and getting your groceries delivered, or buying takeout with 3 percent higher efficiency, is probably not going to improve the world. But it’s heartening to see the AgFunder people write that “we think that the food e-commerce sector continues to be overheated against a backdrop of questionable unit economics and increasing competition.”

Well great, maybe people will start to put money into things that are more likely to change the world — and the other 64 percent of investments are already doing that. 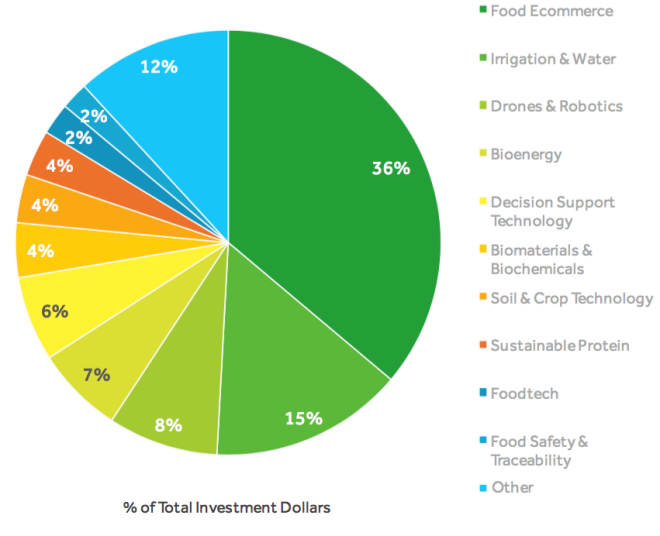 Startups are working on robots that weed fields, satellites that monitor plant health, and sensors that tell farmers what’s going on in their soil. Investors have also been interested in companies working on “biologicals” — which means using microbes to fine-tune soil ecology in order to eliminate destructive organisms or improve growth. Biologicals, AgFunder notes, “do not suffer the same stigma as GMO or chemicals and can achieve organic certification.” There are also companies working on indoor farming, efficient irrigation, seed biotechnology, meat substitutes, and food safety. Exciting stuff! Of course, most startups fail — but a few succeed, and every once in a while, one moves mountains.

This report doesn’t include government investments, and there’s another interesting trend there: The Chinese government is pushing agricultural innovation in a big way. It’s no longer just pouring concrete — now China is making a real effort to grow more food, more cleanly. The American Enterprise Institute tracks Chinese investment, and the farm-info company Gro-Intelligence used that data to make the following infographic: 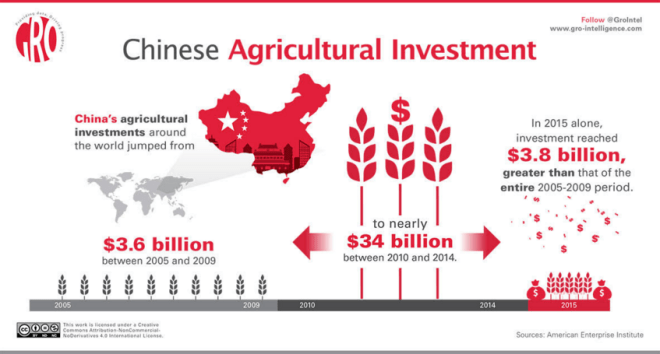 Today, farmers have to make a lot of tough choices — and sometimes those choices pit economic sustainability against environmental sustainability. The more inventors we have working to create better solutions, the more likely it is that farmers will be able to have both.