Damn, it feels good to be a CEO.

Unlike everyone else in the world, executives have seen pay increases of an astonishing 997 percent over the past 36 years. Think about that for a second: While you’re struggling to afford the payments on your used Volvo, your boss’s boss’s boss’s boss has gotten raises of nearly 1,000 percent. It’s such a ludicrous statistic that is seems fake. And yet, it’s not.

And who is the most overpaid of this highly overpaid population? As You Sow, a nonprofit that promotes corporate social responsibility through shareholder advocacy, has released its annual ranking of the 100 most overpaid CEOs — those who earn a great deal of money but aren’t necessarily doing a great job. While their names might not be familiar to you, their companies will be. 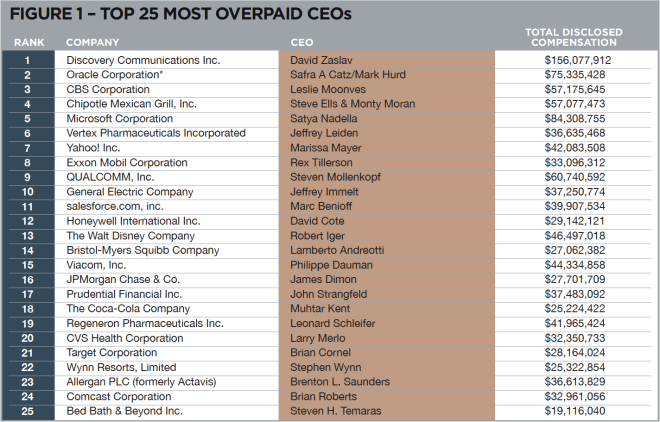 Not only are these numbers obscenely high, the really crazy part is that CEO compensation is in no way linked to how well the company performs. Take No. 4, for instance, the CEOs of Chipotle, a company that is currently giving away free burritos in an attempt to claw its way out of a PR crisis: Both Chipotle’s stock and sales are down, but its CEOs made $57 million last year. Sounds fair.

It’s not just Chipotle. In fact, studies show that the more a CEO is paid, the worse the company performs. That was certainly true of last year’s most overpaid CEO, Anthony Petrello of Nabors Industries, who is notably absent from this year’s list. Petrello’s compensation was nearly $70 million in 2014; in 2015, Nabors — a natural gas company — saw such a decline in value that it was actually removed from the S&P 500 and cut nearly 3,500 jobs. $70 million can buy you a CEO, it seems, but that CEO can’t make you a profit.

This year’s list includes ExxonMobil CEO Rex Tillerson, who comes in at No. 8 with a cool $33 million in compensation. Climate crime pays, it would seem.

In the meantime, the poverty rate in the U.S. continues to hover around 15 percent. That means almost 47 million Americans live on less than $24,000 a year — about as much as this year’s most overpaid CEO “earns” over one leisurely lunch.

“Everyone wants to be properly compensated for the work they do — it is part of the American dream and bedrock of the capitalist system,” said As You Sow CEO Andrew Behar. “However, as shown in this report, the process which determines CEO pay is broken.” And maybe — just maybe — the system is too.