Solar panel owners and utilities battle it out in California 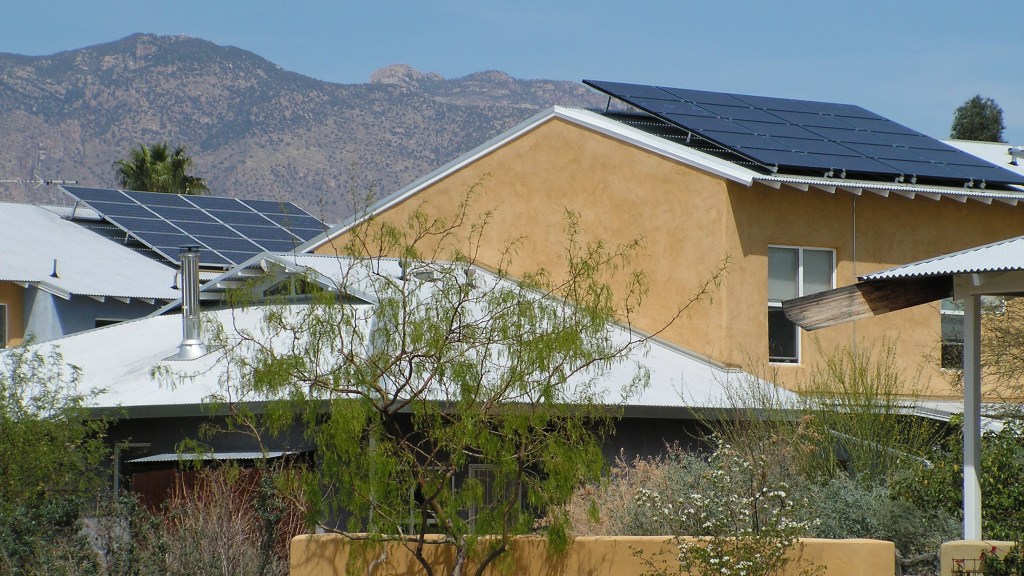 Solar panel owners and utilities battle it out in California

Solar power is having a major moment. It’s growing faster than any other energy source — in 2014, a new system was installed in the United States every three minutes — while the price of a typical panel has dropped 63 percent since 2010. By 2016, experts predict that solar will be as cheap or cheaper than conventional electricity in most states. But solar companies are warning that the boom could soon end, if utilities and some Republican state lawmakers have their way.

Power companies’ beef with solar boils down to a clever payment system that was largely responsible for bringing about the solar boom in the first place — a practice known as net metering. Most solar homes aren’t actually “off the grid”: They stay connected to transmission lines, using regular power when their panels aren’t operating (like at night). But they also feed electricity into the grid when they produce more than they can use.

Sounds great, right? Not really, say the power companies. They pay solar homeowners for their excess kilowatts — but argue homeowners aren’t paying their fair share for grid maintenance. That has utilities in revolt, and the fight has reached a fever pitch in Northern California, where the state’s largest utility, Pacific Gas and Electric, serves more residential solar homes than any other.

Like many utilities, PG&E charges customers on a multitiered price scheme — the more electricity you use, the more you pay per unit. That can incentivize power hogs to conserve, but it can also mean that a poor family of four in California’s AC-dependent Central Valley can end up paying rates far above the national average (and what it actually costs PG to serve them), while a Google-employed bachelor millionaire gets a bargain. If that tech dude decides to install solar panels, he pays even less — even though he still uses the grid.

To be fair, customers who generate their own electricity also save the utilities money, causing less wear and tear on transmission lines and less power lost along the way. But a study commissioned by California’s Legislature found that in the Golden State at least, these benefits do not fill the hole left by lost revenue. Net metering cost the state’s privately owned utilities $254 million in 2012, a price tag estimated to jump to $1.1 billion per year by 2020 as an estimated 500,000 more homes go solar.

The solar industry shot back with a study of its own, arguing that those costs are minor compared with the roughly $32 billion that California’s major utilities earned in 2013 and that, for PG&E, the problem is not really caused by solar but by the huge gap — about threefold — between the company’s lowest and highest rate tiers. Since solar is attractive to high-tier customers, who stand to save the most money, each one who saves by installing a system is a big blow to the utility’s bottom line. Smooth out the rate tiers, the study suggests, and the problem disappears.

In 2013, California lawmakers told the state’s utilities to do just that. PG&E’s proposed solution, set to be voted on by state regulators in the spring, would reduce the number of price tiers and add a fixed monthly grid maintenance surcharge. The problem is that the fixed charge will erode the cost advantages of going solar, since you can’t avoid it just by using less power from the grid. Sanjay Ranchod, a policy analyst for the solar installer SolarCity, sees the change as a sneaky way for the utilities to kneecap the competition. Imposing a fixed monthly charge, he says, is “one way you can inhibit the growth of distributed solar.”

Similar battles are playing out from Utah to Wisconsin, as utilities fight to roll back net metering, restructure their rate systems, or impose special fees for solar users — and it’s easy to see why power companies are sweating. The American Society of Civil Engineers estimates that the gap between the cost of maintaining the U.S. grid and the available funds will grow by $11 billion per year through 2020, since the revenue streams utilities have traditionally relied on to pay for those costs — investments in big power plants they can recover through increased sales — are drying up.

John Farrell, a program director at the Minneapolis-based Institute for Local Self-Reliance, argues that to succeed down the line, utilities will have to act more like grid managers, connecting power from a host of sources (much like data flowing into a server from many places) and investing in technology that helps consumers use power more efficiently. “There’s no outcome 10 or 20 years from now that looks anything like what utilities have been before,” Farrell says. “It’s going to happen anyway, and you just have to choose whether you’re gonna like it or not.”